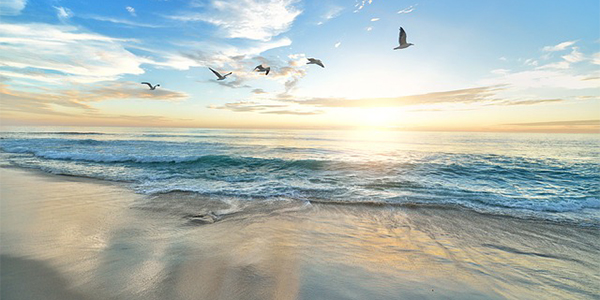 The summer of 2018 was not a friendly one for outdoor activities from the Midwest to the Northeast and Mid-Atlantic. Warm, humid conditions were common with a boatload of rain for many as well. The winter wasn’t snowy for everyone, but it remained wet and active, with only a few limited stretches of dry weather as we head through the spring months. The result? Wetter conditions than normal over the last 12 months across almost the entire Continental U.S. east of the Rockies. Needless to say, we’re sure many of you wouldn’t mind at least some drier weather this summer.

Forecast temperature and precipitation pattern for the June through August period.

We expect a warmer than usual summer across the nation as a whole, though not as hot as the summer of 2018. Cooler than normal conditions are expected to prevail across the eastern Rockies, northern Plains, Upper Midwest and northern Great Lakes. The West Coast, especially the Pacific Northwest, can expect more warmth than average, while much of the Deep South and East Coast will also feature more heat and humidity than normal. The hottest conditions compared to average can be expected across parts of the Gulf Coast and Southeast states.

In terms of rain, another wet summer is expected. The clash of cooler air to the north and west with warmth over the Southeast, along with an expected relatively active weather pattern, will result in frequent rain/thunderstorms and above average rainfall from the Four Corners across the Plains into the Ohio Valley, Great Lakes, and Mid-Atlantic. The Gulf Coast may be quite dry (outside of any tropical impacts later in the summer), with the Pacific Northwest and northern New England also lacking rainfall at times.

What Went Into The Forecast 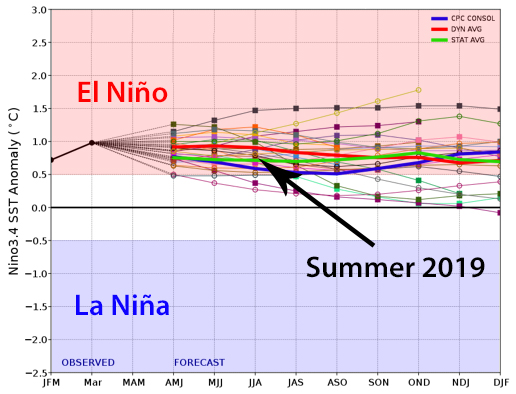 Model projections of El Niño / La Niña over the next several months. IRI/CPC

We are currently in a weak El Niño across the Tropical Pacific, and this is likely to continue through the summer months. What does this mean? It means warmer than normal waters along the equator near and east of the International Dateline. During the summer, this typically brings wet conditions across parts of the central and eastern United States, and also less heat across the central portions of the country.

Waters across the Gulf of Mexico and off the East Coast are noticeably warmer than average as we approach the start of summer. Warm waters in these areas can increase moisture and also temperatures across the southern and eastern United States. In addition, soils are quite wet over much of the central and eastern U.S. (except for parts of the Southeast) due to all of the rain over the last year. Wet soils can add additional moisture to the atmosphere, and also can limit how hot it gets.

The temperature departures in summers that featured similar large-scale patterns to what we may see this year. NOAA/ESRL.

An additional factor we consider when making seasonal forecasts is analogs; in other words, what did other years do with similar larger-scale patterns to what we expect this summer? These analog years show warmth across much of the southern U.S., and cool conditions across the Midwest, Great Lakes, and interior Northeast. This isn’t too different from what we’d expect due to the above mentioned variables (El Nino, soil moisture, water temperatures), and adds confidence to the general idea of our forecast this summer.

Either way, it will be warm, humid, and wet at times, and cooler / drier at others, with drought rather unlikely. Hopefully this gives you an idea of what to expect to be more common as we head into the summer.