Last year was the fifth consecutive Atlantic Hurricane Season that averaged above normal.  At the same time, it was the tenth straight warmer than average summer across the Lower 48. Call it persistence, but our outlook favors both trends continuing this year.

2021 is expected to bring a warmer than normal summer to much of the continental United States. The hottest weather will likely be out west, with a pocket of relatively “cooler” weather from the southern Great Lakes and Ohio Valley on south towards the Gulf Coast. We are narrowly leaning warmer than average in this region, though at times it will be more seasonable here. For the East Coast, expect a warm start to the summer as we progress through the month of June.  This will be followed by increased humidity and continued above normal temps through August and September.

In the rainfall department, the wettest weather is expected to be focused from the Southeast into the Ohio Valley and Mid-Atlantic.  This will bring relief to the current dry spell in parts of these regions. In contrast, we are forecasting a somewhat dry summer from the northern Great Lakes eastward into northern New England. Out west, it generally looks like a drier than average summer as well.  This isn't good news because much of the western U.S. is already mired in a deep drought. However, there is some hope that the monsoon season can bring at least some much needed rainfall to the Desert Southwest as the summer wears on.

While activity is not expected to rival last season’s record numbers, another more active than normal season is forecast. With Tropical Storm Ana (a harmless swirl of thunderstorms east of Bermuda in late May) already under our belt, a few more storms are possible through June and July, though most of these early storms would be on the weaker side. This builds to what looks to be another active peak season in August and September, only slowly tailing off into the fall, before the season ends at the end of November. While many storms will spin out to sea, there is a signal for activity potentially getting drawn towards the Mid-Atlantic and Southeast earlier in the season (through August), before focusing towards the Gulf Coast and Caribbean towards September and October. As 2020’s impacts up and down the U.S. coast emphasized, even one tropical impact can be disruptive and damaging, and coastal residents should know what their hurricane plan is as we head into another season.

A cooling of the waters across the equatorial Pacific occurred from the summer of 2020 through this most recent winter, called a La Niña. This cooling of the waters influences the weather pattern across the globe. In the summer, a La Niña tends to result in warmer and drier conditions across much of the United States. An El Niño event, or a warming of those Pacific waters, can bring the opposite result in the summer across the Lower 48. As the above image shows, waters are leaning slightly cooler than average across the equatorial Pacific, but the amount of cool water is no longer enough to be classified as an official La Niña. Relatively neutral conditions are expected to persist for this summer.

With no strong move towards an El Niño, there may be a modest La Niña “hangover” this summer, which likely nudges the needle a little hotter and drier across parts of the continental U.S., especially out west. 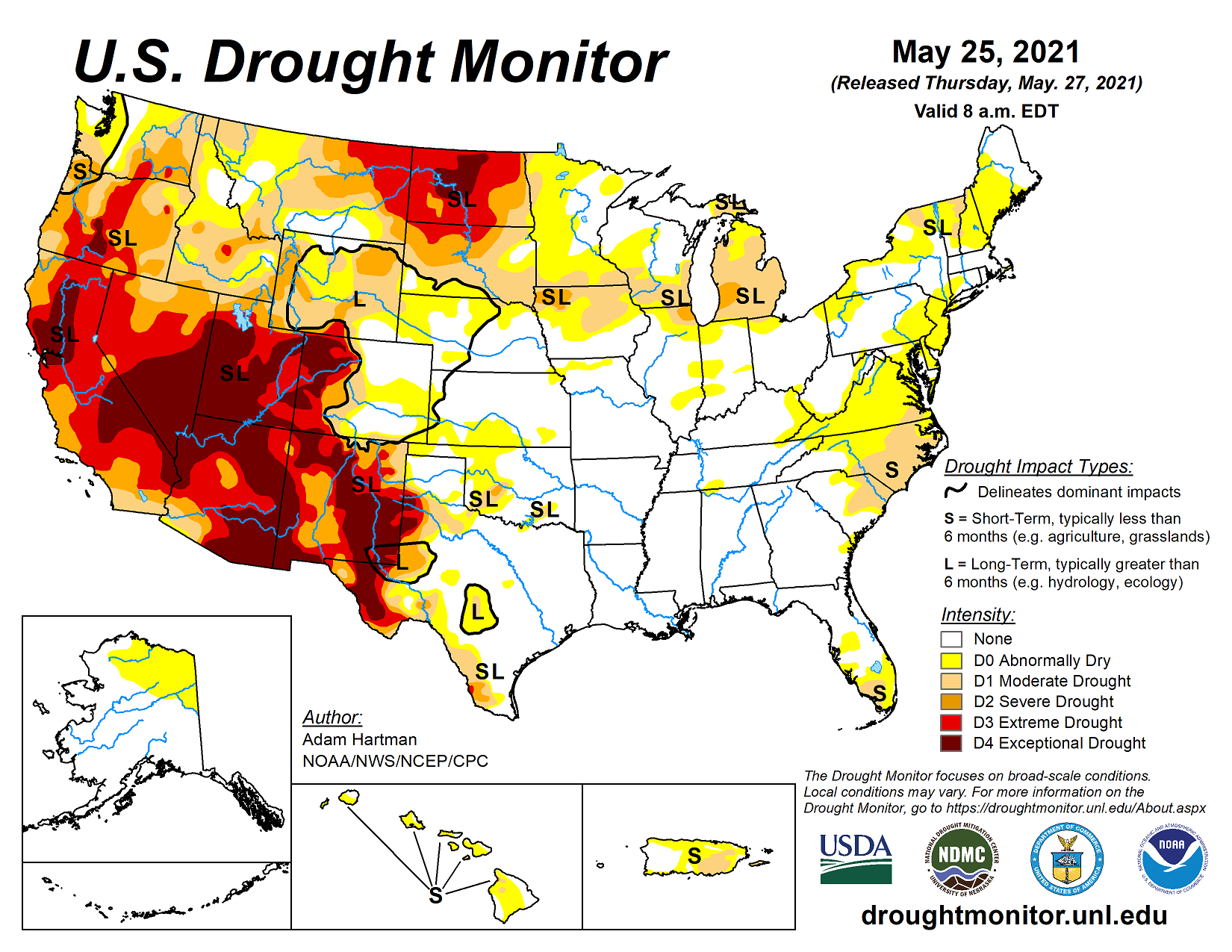 Heading into the start of summer, a large portion of the western United States is in a significant drought. Unfortunately, the forecast doesn’t offer much hope for improvement, and another worse than average fire season is possible later this summer into the fall. There is hope that a more active monsoon brings at least some relief to the Desert Southwest. Elsewhere, parts of the Upper Midwest and Great Lakes are in a drought, and the forecast suggests that may worsen some through the summer. Parts of the East Coast and Northeast were highlighted as being on the dry side in the May 25th version of the drought monitor pictured above, though rain over the recent Memorial Day weekend will likely help quench the dryness. In addition, the forecast bodes well for limited drought concerns this summer, outside of perhaps northern New England.