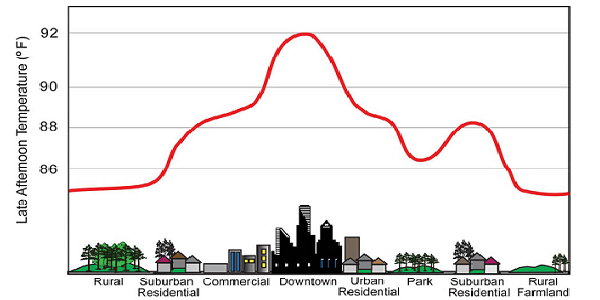 Image above courtesy of NOAA

"90s in the city, but 80s in the suburbs this afternoon" Sound familiar? Being stuck in the big city during a heat wave is brutal compared to spending it in the country. But why does this phenomena occur?

Cities are often a concrete jungle covered in buildings, asphalt and are typically densely populated. On the other hand, the suburbs and rural areas tend to have much more vegetation and are less populated. The science behind the Urban Heat Island Effect lies in the amount of heat surfaces (such as concrete and asphalt) can not only absorb, but also retain. Since these surfaces absorb a ton of heat from sunlight (typically warming 50 - 90 degrees hotter than the air temperature) then slowly release it, it's no wonder places such New York City and Philadelphia are usually warmer than their respective suburbs!

Another big player in the temperature differences between cities and suburbs comes from the amount of vegetation. Not only do plants and trees shade surfaces, they also perform a process called evapotranspiration (combination of evaporating water from soil and plant leaves) which is a major cooling mechanism.  Thus, vegatative surfaces can be 20 - 45 degrees cooler than other exposed surfaces!

Notice temperatures around Newark, NJ and NYC range 80 - 85 degrees while the surrounding suburbs are only in the 70s

The temperature differences due to the Urban Heat Island influences weather events all year-round. During winter storms, it can affect precipitation types. Consider a situation where a city is 40 degrees while the nearby suburbs are teetering near 32. Due the above freezing temperatures, incoming showers may merely wet the ground in the city but fall as snow in the suburbs, leaving a coatings behind. On the flip side, summer time heat waves can present dangerous health hazards for urban residents. Temperatures in the 80s in the suburbs versus 90 - 95 in the city during a muggy day will produce a heat index in the mid-90s in the suburbs but cooking at 105 for the city!

So next time you're wondering how you're sweating strolling through New York City while a friend is comfortably enjoying her porch across the Hudson, remember the Urban Heat Island Effect is the main culprit.