An Unsettled Week...Maybe Some Snow?

This final week of October will be on the gloomy side as any sun over the next few days will be rather limited. After a damp Monday with occasional showers and drizzle, we will see some improvement in the weather for Tuesday and Wednesday.  Still plenty of clouds in the forecast for both days, but we should at least see some sunshine, especially Wednesday as high pressure briefly slides across New England.  In fact, Wednesday will likely be the nicest day of the week before things change quickly for Thursday and Friday.  Before we get to that, here is a look at forecast temperatures for 2 PM Wednesday.  Quite seasonable and fall-like.

Beyond that, a soaking rain is expected for the end of the work week from Boston to Washington, D.C. as the remnants of Tropical Storm Zeta slide towards the I-95 corridor.  There will likely be some pockets of heavy rain as well and this may result in localized poor drainange and roadway flooding, especially in prone areas.  Here is a look at total rainfall expected from the storm system for Thursday and Friday.

Now the interesting part of the forecast, with some help from our Winter Risk product updated this morning...

While the remnants of Zeta begin to exit, a secondary coastal low will take shape later Thursday Night into Friday. As this strengthens, it will pull in colder air. Despite the fact we are still in October, a rain to snow event is looking more and more likely for parts of the region. Namely, this would be through portions of New England (mainly interior) and into Upstate NY. But it's not ruled out that the Lower Hudson Valley, into parts of Northern NJ and PA (especially elevations) see some snow. 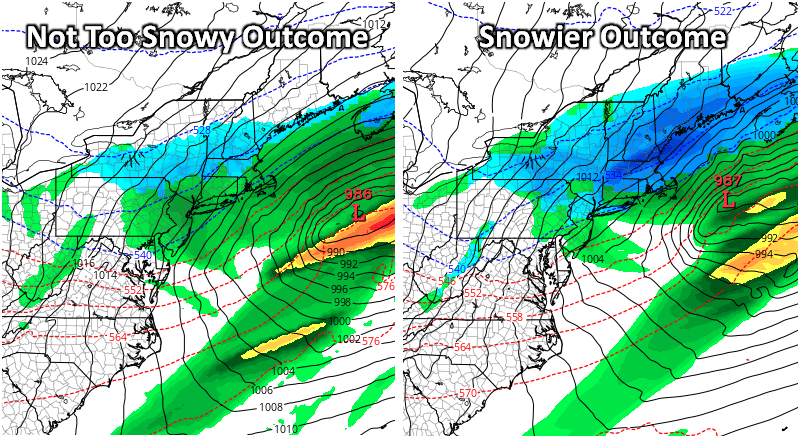 So because it's still 4 - 5 days away and one of the more complex systems we've seen, confidence isn't high yet. However, our initial thoughts are that if this does come together just right, snow can be heavy enough to not only accumulate on grasses, but also pavements. Those in New England, especially into NH, N/W of 495 in MA and northern CT should pay particularly close attention. However, places closer to the I-95 corridor in New England, as well as into northwest Jersey and the Poconos could also see some accumulating snow. Further south / east from NYC to Philly, the odds to even see flakes are much lower, and the chance for any impacts are particularly low. As for snow amounts, it's still a bit too early to say, but some locations could see accumulation, especially if the colder air is ahead of schedule and the rain is able to change to snow on the earlier side.  Again, this would be mainly confined to areas away from the coast.  However, we all know it can snow in late October.  Remember the Snowtober storm near Halloween in 2011? (here's a reminder: https://weatherworksinc.com/news/snowtober-2011-remembered)

We'll continue to update social media through the week as we get a better idea on what is going to happen with this early potential for winter weather.  Stay tuned !!