2020 was an interesting, yet eventful year, to say the least. From a global pandemic, to a presidental election, to even murder hornets, we saw a lot of things happen this past year that were extremely impactful. The weather was no exception to this with various events making 2020 a year to remember from a meteorological standpoint. Below we recap the top weather events of 2020 (in no particular order) based on their high impacts to various communities, with a focus on the Midwest into the Northeast.

We had a number of severe weather events this past warm season across the Midwest, Northeast, and Mid-Atlantic. In particular, three events stood out to us as extremely impactful to areas within our forecast footprint:

A derecho (or a widespread, long-lived wind storm associated with a band of quick moving showers and thunderstorms) tracked from the Ohio Valley through the northern Mid-Atlantic in the morning and early afternoon of June 3rd. With a derecho, though the magnitude of destruction can be similar to what is produced by a tornado, damage is directed in one direction along a straight swath, known as "straight-line wind damage."  As the system organized and pushed through western and central Pennsylvania, some wind damage occurred, with wind gusts up to 60 mph reported. However, as the system tracked farther south and east into increasingly moist and unstable air, the line of storms became even more organized, with swaths of widespread, significant straight-line wind damage occuring from Berks County PA, through Philadelphia, to the southern shore of New Jersey. Numerous wind gusts of 60 - 80 mph were observed, with even a few gusts exceeding 90 mph along the shore. The following is a radar loop from the National Weather Service (NWS) depicting the derecho's progression across the Mid-Atlantic until it exited off the coast around 3 in the afternoon on June 3rd:

Following the derecho, additional storms fired in the late afternoon in central Pennsylvania, tracking again south and east and producing additional damage around the same area impacted from the earlier derecho. Even a tornado warning was issued that evening for Philadelphia and Camden. Overall, 250 reports of wind damage were collected by NWS for June 3rd (see image below), with hundreds of thousands of households in southeast PA and central/southern NJ left without power for hours to days. Unfortunately, there were four fatalities making this the highest death toll from a derecho event in the Mid-Atlantic since 1950. 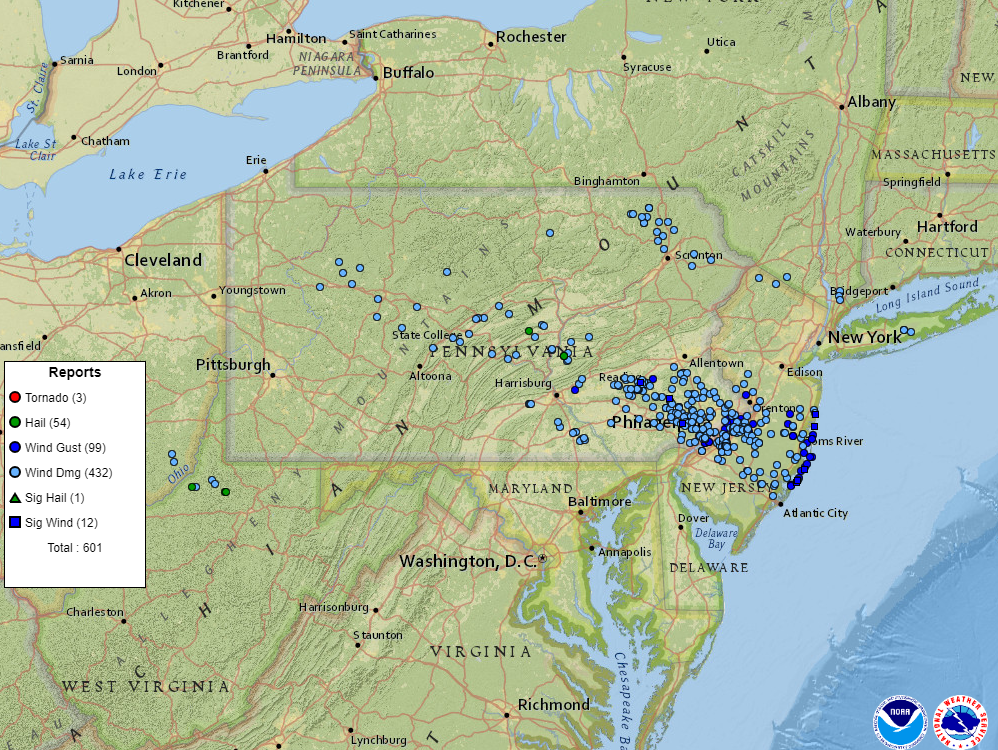 An incredibly strong derecho (even referred to as a "once in a decade" occurence by the NWS due to its intensity) first formed in northern Nebraska and souteast South Dakota, rapidly intensifying and trecking across Iowa before entering Illinois and Indiana on August 10th.

Widespread straight-line wind damage occurred with this storm, with over 700 reports of severe wind speeds (58+ mph, though winds were frequently over 70 mph with this system) or wind damage. Eastern Iowa, specifically Cedar Rapids, took the greatest toll, with estimated winds of 110-140 mph. Damage occurred across a large portion of the area, destroying numerous buildings, causing an abundance of long-duration power outages, damaging or destroying millions of acres of crops, and even toppeling semi-trucks off of highways. In addition, the derecho produced 20 confirmed tornadoes across Illinois, Wisconsin, and Indiana. 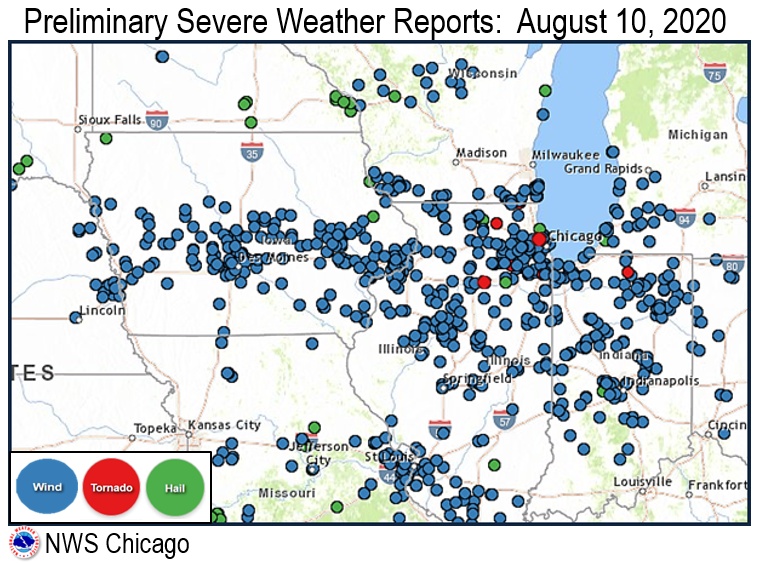 A potent low pressure system tracked across the Great Lakes region in the early morning on November 15th. Along with it, a robust cold front that first produced a line of scattered showers organized and developed into a line of strong thunderstorms over northern and central Indiana, tracking eastward through Ohio into the early-to-mid afternoon on the 15th. Widespread wind damage was reported with this event. Wind gusts of 50-65 mph across northern and central Indiana as well as southern and central Ohio caused power outages, structural damage, and downed trees. Meanwhile, in northern Ohio, damage was more extensive, with frequent wind gusts to over 60mph, the highest gust being recorded at 79 mph. The following is a radar progression of the event across Ohio from NWS Cleveland:

As this cold front and associated line of storms continued eastward, conditions in the Northeast and Mid-Atlantic were becoming prime for severe weather. An unseasonably warm and moist day, combined with extreme wind fields and just a bit of instability, allowed for a squall line to develop just ahead of the cold front. Meanwhile, winds were already gusting over 40 mph in some places just due to the overall wind pattern of the day. But, along the squall line, wind gusts of 55 - 65 mph occurred, producing widespread damage and power outages across the Northeast and Mid-Atlantic on the evening of the 15th. What was interesting to many about this event was that very minimal lightning actually occurred with this squall line, with gusty showers along the line being the main damage producer. 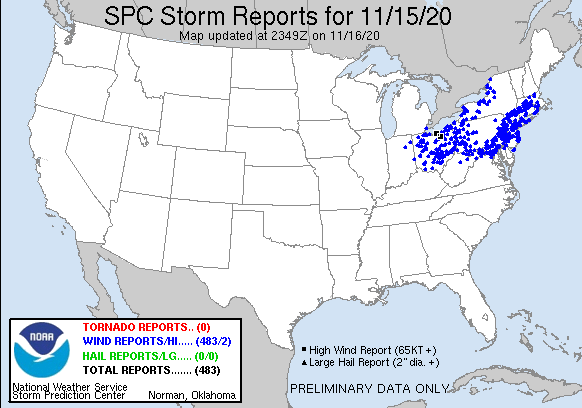 The 2020 Atlantic hurricane season was the most active season on record with more than 30 named storms (which is two and a half times the seasonal average), 13 of which became hurricanes. 12 storms made landfall in the continental U.S., causing at least $38 billion dollars in damage. Hurricanes Laura and Delta both destroyed the Lake Charles, LA area within a few weeks of each other, making landfall only 15 miles apart. Hurricane Sally in September was the first storm to make landfall in Alabama since Ivan in 2004. For the Northeast and Mid-Atlantic, not only were we affected by Tropical Storm Fay (gusty winds and heavy rainfall) in July, but also by Tropical Storm Isaias which resulted in widespread impacts.

Isaias made landfall as a hurricane in North Carolina on August 3rd. The storm then accelerated northward while remaining just inland of the Atlantic coast, impacting the Northeast and Mid-Atlantic as a tropical storm on August 4th. The strongest winds were maintained on the east side of the storm, especially in New Jersey, Delaware, eastern Maryland, Long Island, and Connecticut, with frequent tropical storm wind gusts of 50-70 mph reported, as well as occasional hurricane force wind gusts. West of the storm's center, very heavy rainfall occurred (especially in eastern MD and PA), with widespread totals of 4-7 inches recorded, leading to severe flash flooding and river flooding. 3 million power outages were reported, nearly half of them in New Jersey. Also, thousands in the NY-NJ-CT Tri-State were left without power for over a week, lending to investigations of various utility companies. Isaias was the costliest storm to hit the Northeast and Mid-Atlantic since Hurricane Sandy in 2012.

October was rather warm and could even be considered summer-like across the region this year, that is until an unusual cold snap occurred. This cold air was pulled down from the north by a secondary system that followed the remnants of Hurricane Zeta, which produced 1.50 - 2.50" of rainfall across the Northeast and Mid-Atlantic on October 29th. So, with this cold air in place, an uncommon October snowfall occurred across New England. Parts of northwest NJ and the Hudson Valley saw up to 2" across the higher hills, but up to half a foot fell across central Massachussets. Boston Logan's Airport received 4.3", shattering its October record! Even Rhode Island and eastern Connecticut received several inches, with the largest amounts falling across the higher elevations. Some wet flakes and ice pellets were even reported in the NYC metro!

A powerful Nor'Easter pummeled the Northeast and Mid-Atlantic states on December 16th-17th, producing widespread swaths of over a foot of snow across a large portion of the area. This was the biggest snowstorm to affect the region in about 5 years, ending a 1,000+ day high-impact snowstorm drought in this region. Significant snowfall in major metropolitan areas such as Washington, D.C., Philadelphia, New York, and Boston from this one single event eclipsed the snowfall totals from the entirety of the last winer season. Areas in upstate New York, such as Binghamton, received an unexpected, record-breaking 40 inches of snow. Winds were also gusty across the region, especially along the Jersey Shore, where a peak gust of 62 mph was recorded. Winds combined with heavy snowfall left thousands without power, especially in the Mid-Atlantic. 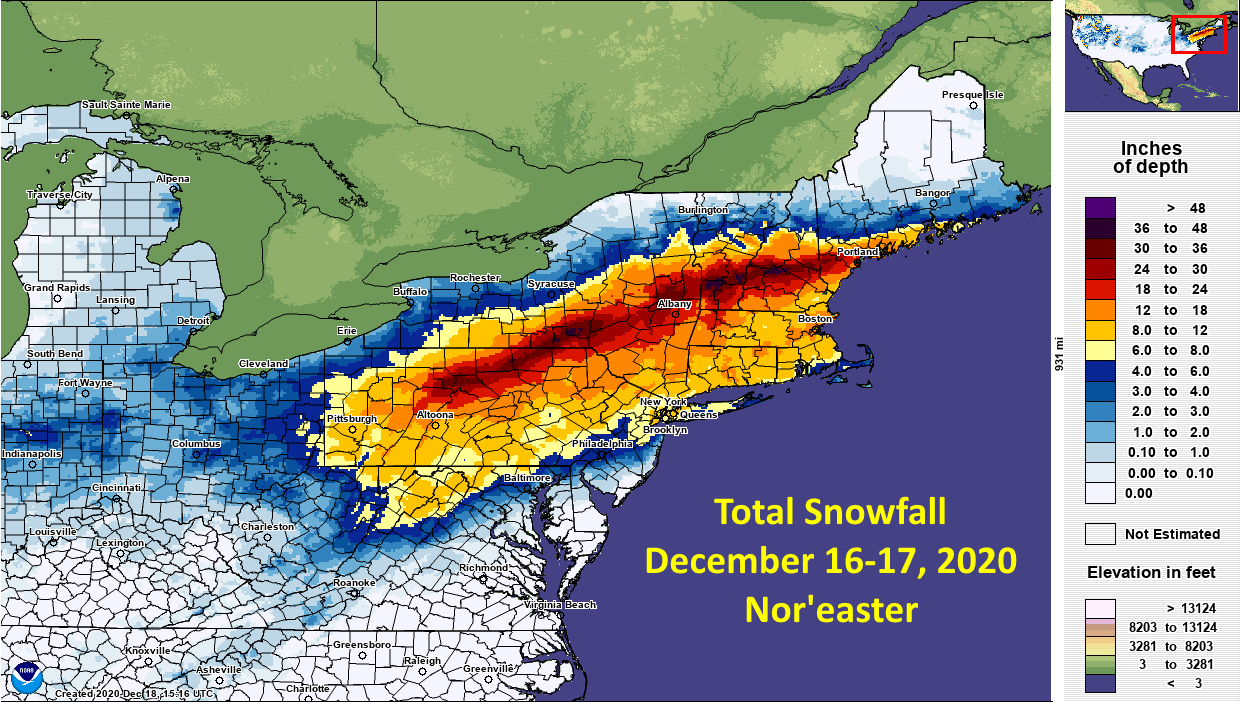 Although highly impactful wildfires did not occur in our forecast area, wildfires were a big weather story out in the western U.S. this year, ravaging various areas beginning in June and continuing through December. Unusually dry and warm weather, combined with an excess amount of dried out or dead vegetation/forests, as well as wind storms and rare lightning events, primed the West for the ignition and spread of firey blazes. In California alone, 4.2 million acres of land were burned from fires (which is an area larger than Connecticut!), destroying more than 10,000 structures. Much of the state, especially San Fransisco, was buried beneath dense plumes of smoke that took weeks to fully dissipate. Over a million acres burned in Washington and Oregon combined, and Colorado saw one of its three largest fires on record in 2020. Fires here were not contained until a snowstorm arrived in Colorado at the end of October. Smoke from these wildfires led to hazardours levels of air pollution on the west coast. But, the smoke traveled eastward, covering almost the entire lower 48 and even reaching Europe, leading to some smokey sunrises here in September. 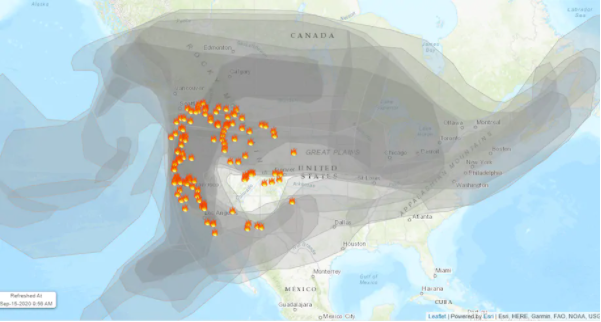 Disperson of smoke from western wildfires in September, courtesy of The Washington Post and Air Now

Closer to home, New England experienced its own drought at the end of the summer and throughout fall this past year. An exceptionally breezy day on the 23rd of September led to several dozen wildfires in Massachusetts and Connecticut due to a lack of rainfall, which was rather abnormal for that time of year.