Biggest Weather Events of the Past Decade: Northeast Quarter of the U.S.

The past decade was full of extreme weather events from blizzards to hurricanes. Here are five events that our meteorologists thought were the most impactful from the Midwest through the Mid-Atlantic and Northeast.

New England has had many snowy winters, but none were more exhausting and consistent as the winter of 2014 – 2015. A persistently cold pattern plagued much of North America that winter, with Massachusetts being the relative ground zero for the snow that resulted.

Through the winter, Boston’s Logan Airport recorded at least 36 calendar days of measurable snowfall of at least 0.1” or more, with 19 of those over 1”. Five of the days featured major foot-plus snowfalls over a period of three weeks to really allow the snow to pile up, January 27th (22.1”), February 2nd (16.2”), February 8-9 (22.2”), and February 15th (13.0”). With all of this activity through the span of one season, Boston exceeded the century mark for total snowfall for only the second time in its recorded history with 110.6”. Unsurprisingly, this was a record year, besting 1996’s 107.6”.

With much of the significant snow occurring in such a dense period of weeks, it began to pile up quite a bit and took a toll on the region. Structures such as rooftops began to weaken or collapse, with many roads becoming tough or near impossible to navigate. Issues regarding what to do with the snow began to arise in attempts to clear it. Eventually, stock piles of snow became large enough for some of them to last into the summer!

Chicago is no stranger to cold and snow, but this blizzard around Groundhog Day in 2011 was particularly crippling to the city. The long-duration storm began innocently enough with occasional light snow and flurries on January 31st, but its true fury was unleashed as the event progressed into February 1st.  Snow fell at rates of 1 - 2 inches per hour in the heaviest bands, with numerous reports of thunder and lightning throughout the region. Winds were extremely strong during the height of the storm as well, gusting to 50 - 70 mph, which lead to severe drifting as high as 6 - 10 feet!

The aftermath was just about as devastating as it could be for a snowstorm, as a combination of heavy snow and extreme drifting made many roads impassable with some having to completely shut down. Lake Shore Drive was one of the hardest hit, with over 900 vehicles stranded. Most of Northeast Illinois finished buried under 1 – 2 feet of snow. The storm was the 3rd heaviest snowfall in Chicago's history, with 20.2” at O’Hare Airport, falling short of the record by just a few tenths.

Washington D.C. is not necessarily known for being one of the snowier cities in the Mid-Atlantic region. However, for at least for one brief period in history, the nation’s capital became the snow capital as well, impacted by not one, but two coastal snowstorms between February 5th and 10th of 2010. The busy period began with the bigger of the two snowstorms, which crushed the Mid-Atlantic from D.C. to Baltimore with 2 - 3 feet of snow on the 5th into the 6th. As if this were not unprecedented enough for the region, it was followed by another storm which dropped another more “modest” 1 – 2 feet of powder from the 9th into the 10th. The state of Maryland for the two storms was crippled between the both of these events, collecting a sum of 40 – 50 inches of snow between them.

While neither of the two events were necessarily record breakers on their own, the six-day stretch upon which these events occurred certainly broke records. At Dulles International Airport, 41.7” of snow obliterated the prior record of 29.5” previously set in 1996. It was a similar result for Baltimore, whose 44.5” breezed by the 32.6” that also fell in ’96. In many ways, these events alone made the 2009 – 2010 winter historic overall.

Needless to say, it is a region that is not used to too many snowstorms of this magnitude, let alone twice in one winter. Looking back in the history books, it was the only winter season which featured two events to reach top-20 status.

The Blizzard of 1996 was a certainly a memorable one, for those who both lived and studied the storm. 20 years and a few days later, a storm of a similar nature came to rival it. In fact, the blizzard of 2016 had a striking resemblance to its predecessor, including the atmospheric pattern leading up to its overall path. The major difference, of course, was this one being fresh in everyone’s minds.

Up to 2 to 2.5 feet of snow fell for many from West Virginia, to Maryland, Pennsylvania and northern New Jersey. It was a record-breaker for Central Park, tallying 27.5” and besting the prior decade’s powerhouse blizzard total of 26.9” in February of 2006. Unsurprisingly, with such deep snowfall, major disruptions to travel resulted, along with several deaths related to the storm as well.

No storm stood out in the 2010s more than Superstorm Sandy. At one point in its lifespan, the storm was a category 3 hurricane in the Caribbean. After exiting Cuba and skimming the Bahama Islands, it took a northeast track normally suited for an out-to-sea push. Instead, the cyclone turned sharply northwest, making an unprecedented b-line toward the East Coast. This turn occurred as a result of an upper level trough of low pressure dropping into the Great Lakes.

Many of the historical impacts were brought on by Sandy's unusual track and strength, but when combined with a full moon and powerful northeast winds, tides rose to record levels. This led to devastating storm surge, some of the likes few have ever seen in the region. It resulted in billions of dollars in damage, from the loss of shore homes in New Jersey and Long Island, flooded out roads, and even damaging salt water flooding into Manhattan’s subway system. Power outages and gas shortages were also a major side effect wrought after the storm’s exit, in some cases lingering for weeks after.

The cyclone became one of the largest on record in terms of size, large enough to bring heavy flooding rains through the Mid Atlantic, and even 1 - 3 feet of snow to the mountains in West Virginia. In fact, Sandy was the 5th costliest hurricane in U.S. history! To add insult to injury, the pattern allowed another power nor’easter to develop, leading to significant accumulating snow only a week later, hampering relief efforts. For more information on Sandy visit: https://weatherworksinc.com/news/sandy-one-year-anniversary

So that pretty much does it for some of the most impactful weather events from the Midwest through Northeast. However, by no means does this blog cover all of the extreme weather events we thought about. Notable exceptions were the 2011 Halloween Nor'easter, the midwest Arctic Outbreak in 2019, Winter Storm "Nemo" in 2013, the D.C. Derecho in 2010, and the Boxing Day Blizzard. However there is one storm we just had to talk about and we've included that below: 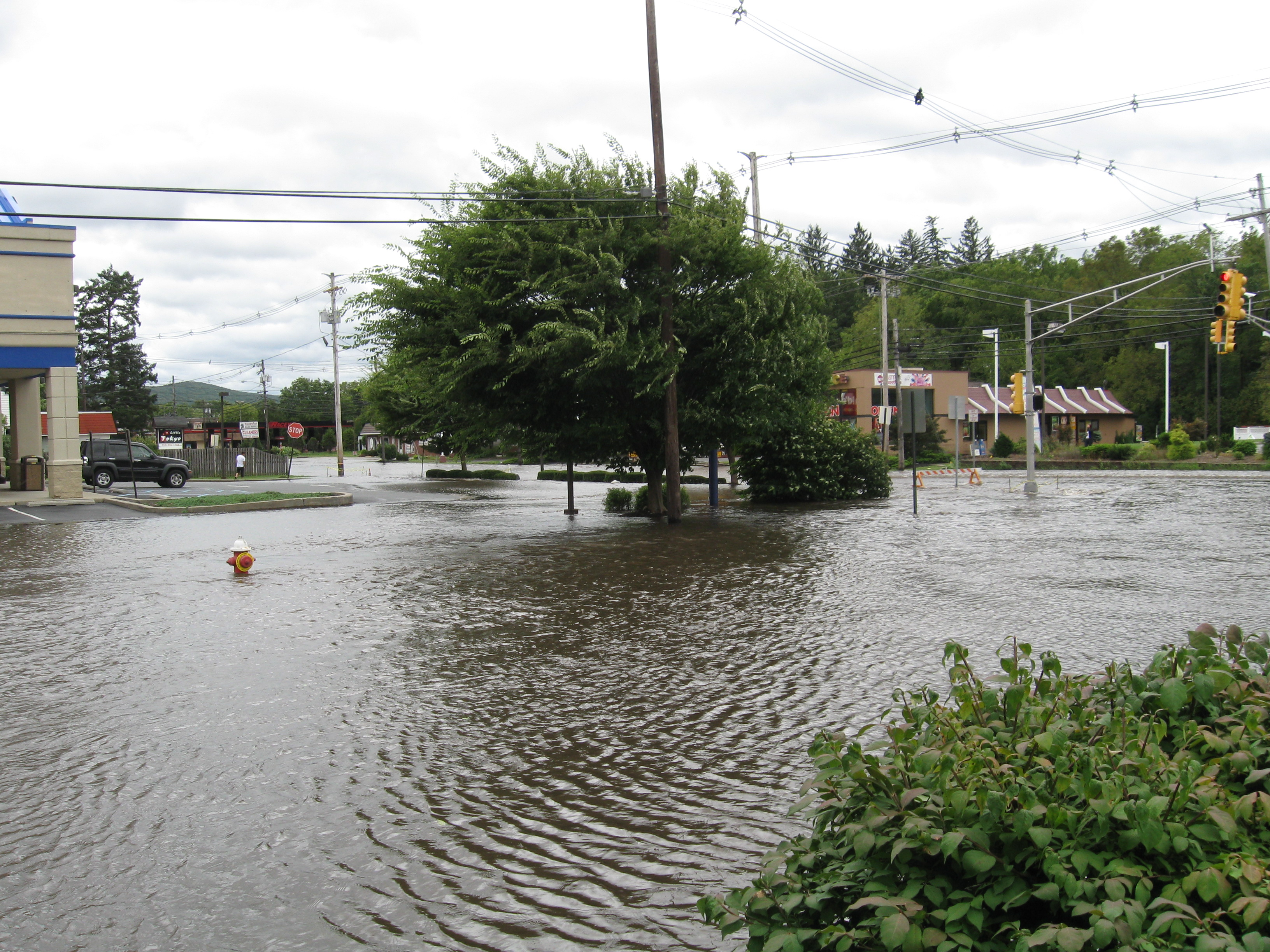 Hurricane Irene was a large and destructive tropical cyclone that impacted much of the Caribbean before heading up the Eastern Seaboard.  Irene was a "typical" Cape Verde storm, meaning it emerged off the West Coast of Africa as a disorganized area of thunderstorms on August 15th, 2011. It then strengthened as it traveled west across the very warm Atlantic Ocean waters. It first became a tropical storm near the Lesser Antilles islands on August 20th, before becoming a hurricane near Puerto Rico on August 21st. Irene continued to strengthen and peaked as a Category 3 hurricane (winds of 111 - 129 mph on the Saffir-Simpson scale) on August 24th near the Bahamas. The hurricane then weakened a bit before making its first U.S. landfall on August 27th at Cape Lookout, NC with 85 mph winds (Category 1). While the wind caused issues, torrential rain (10-15 inches) fell across parts of eastern NC causing devastating floods. The storm then moved almost due north making a second U.S. landfall as a 70 mph tropical storm in Little Egg Inlet, NJ on August 28th before its third and final landfall about 4 hours later in Coney Island, NY with sustained winds of 65 mph. The remnants of Irene then continued to push through New England before dissipating into an extra-tropical system on the 29th.

Undoubtedly, it was Irene's heavy rainfall that made the storm so historic.  And since the storm occurred on the heels of an already record wet August in the Northeast, the flooding was just that much worse.  Irene produced a widespread 5 - 12 inches of rain across eastern Maryland, Pennsylvania, Delaware, and New Jersey.  Several rivers reached or exceeded flood stage (some reaching historic crest levels).  This resulted in devastating flooding to towns along some of these rivers.  Unfortunately, 56 people were killed along the path of Irene and caused over 15 billion dollars in damage in the U.S.  This made Irene one of the top 15 costliest hurricanes in United States history.