Long range forecasting is an exercise in trying to pick out strong, well-established “signals” that can cause you to lean towards a certain weather pattern and determine if the “odds” support above, below, or near normal temperatures and precipitation for a period of time in the future.  One of those signals is water temperatures in the tropics, that drive persistent clusters of thunderstorms that can influence the global weather pattern.  Of particular interest are the water temperatures across the Tropical Pacific Ocean, the largest ocean in the world.

What do we Mean by El Niño and La Niña?

Normal water temperature and surface pressure and wind during El Niños, top (a), and La Niñas, bottom (b).  Courtesy NOAA

What Effect does an El Niño or La Niña have on Summer Weather?

Temperature departures during the summer in the last 10 El Niños, left, and La Niñas, right, courtesy of NOAA and ESRL

While there are no true silver bullets in long range forecasting, we can say that El Niños “tilt the odds” in favor of cooler weather across the country in the summer, while La Niñas “tilt the odds” in a warmer direction.  This is a strong signal when looking at the last 10 El Niño and La Niña events.

Rainfall departures during the summer in the last 10 El Niños, left, and La Niñas, right, courtesy of NOAA and ESRL

While the difference in rainfall between La Niña summers and El Niño summers is not quite as stark as the difference in temperatures, La Niña summers are generally drier than El Niño ones…particularly from the Rockies into the Southern Plains towards the Gulf Coast and Southeast.  El Niños are generally wet along the East Coast while La Niñas give a much more mixed signal (and tend to lean dry farther south).  Although the correlation is fairly weak across parts of the country, in general, El Niño summers are rainier than La Niñas.

Aside from United States temperature and rainfall impacts during the summer months, there is a distinct difference between El Niño and La Niña hurricane seasons in the Atlantic Ocean.  This one is easy…La Niña hurricane seasons tend to have noticeably more named storms, hurricanes, and major hurricanes.  Dangerous and impactful hurricanes can and do occur during El Niños, but the overall numbers are frequently higher during La Niñas.

We’ll start at the surface; after all, the near-surface waters are what have the most immediate impact on the air above them.  It’s a mixed bag as warm waters, characteristic of a weak, west-based El Niño exist across the central Tropical Pacific.  Cooler waters, potentially indicative of a move towards La Niña, are lurking farther east.  Elsewhere, the eastern Indian Ocean is very warm, which could become important down the line, as that would encourage lower pressure near Australia and perhaps combine with the cooler waters to the east to encourage La Niña development into the summer. 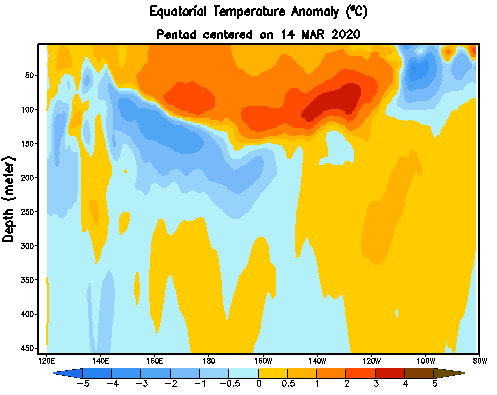 The sub-surface water temperature anomalies across the Pacific Ocean show a similar mixed signal as the waters beneath the central Pacific are anomalously warm; however, colder water exists just below the surface over the eastern Pacific.  If these were to surface and move west in response to strong east-to-west tradewinds, they’d weaken the warmth in the central Pacific considerably.

We are still before what’s traditionally known as the “spring predictability barrier” for El Niño / La Niña events; basically, despite what we may think or try to tell you, it's difficult to know for sure what’s going to happen.  That’s demonstrated by the increased model spread by September, which ranges from a solid, weak El Niño to a borderline moderate La Niña.  There is consensus that we’ll likely be “neutral” for most of the summer, which is likely of relatively higher confidence for at least the next few months.

Forecast surface pressure anomalies for April, May, and June from the CFS model; courtesy Tropical Tidbits

Another way to look at it is to try to look at the current and forecast surface pressure pattern along with the current water temperatures.  Our longer-range models hint at a La Niña-like pattern, with lower pressure than normal near Australia, and higher pressure than normal closer to South America.  This would enhance east-west tradewinds across the Pacific and encourage a cooling of those waters.  However, with a lot of warmth over the central Pacific, this may be a slow process.

Despite being before the spring predictability barrier, with model disagreement, there is a strong argument for rather neutral conditions across the Tropical Pacific this summer due to the current and forecast conditions, along with model forecasts for those water temperatures.  Whether or not we see a move towards La Niña later in the summer, or stay on the warmer side of neutral, may contribute to exactly how warm it is this summer.  Given the nearly wall-to-wall warmth across most of the U.S. so far this year, it’s easy to expect a hot summer; many of our longer-range models agree with that.  Whether or not we see a stronger move to La Niña may influence exactly how hot of a summer we see, and can also influence the Atlantic hurricane season.  We’ll be monitoring this closely over the next several months!