Finally, Rain For The Northeast...

After a weekend that didn't offer much in the way of sunshine here in the Northeast, the new work week started off a bit gloomy as well.  At the same time, a warm and muggy air mass has overspread the area making it feel more like mid-summer than early autumn.  And while the added cloud cover will keep temperatures in the 70s both Monday and Tuesday, dewpoints will be climbing through the 60s.  This will allow for the atmosphere to "hold" more moisture, setting the stage for some much needed rainfall.  Before we get to that, here is a look at those dewpoints for 2 PM Tuesday.

Now, let's talk about that rainfall potential this week.  Actually, there will be a few opportunities as the weather pattern becomes more amplified and helps to draw in tropical moisture along East Coast.  This, combined with a slow moving cold front will lend to the potential for heavy rainfall up and down the I-95 corridor.  Shower chances will increase from west to east on Tuesday, but it looks as though the steadiest and heaviest rain holds off until Tuesday night.  This is expected to be a widespread rainfall and there will be some embedded storms and downpours.  There may even be a few gusty storms mixed in, but the greatest risk for that will be from New York City to Washington, DC.  Periods of rain (heavy at times) will continue Tuesday night into Wednesday before tapering off west to east.  Then, we may see another area of low pressure develop along the cold front Wednesday night into Thursday.  This could result in another round of heavy rain and downpours.  And while the next several days will bring much needed rainfall (especially for New England), any storms and downpours will contain high rainfall rates and may result in localized flooding.  Here is a look at the forecast total rainfall through Thursday. 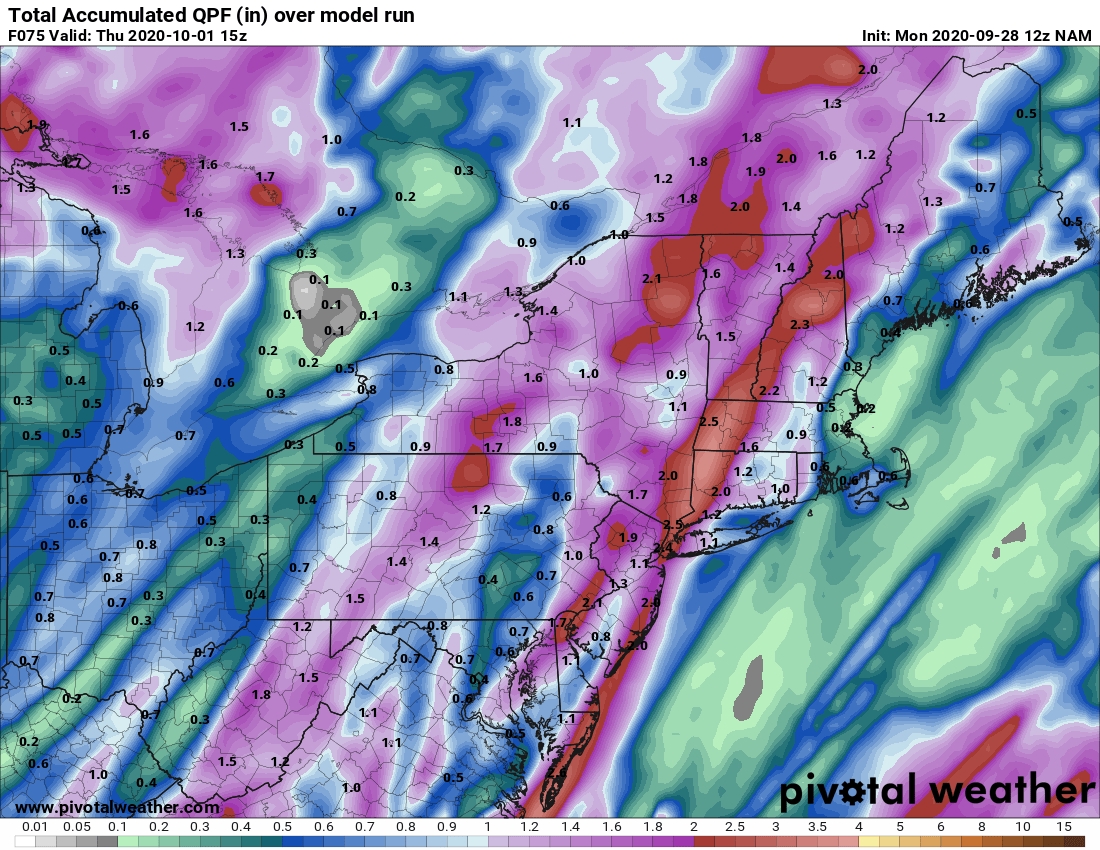 Beyond that, a cooler and drier air mass takes over, but we still may have to watch for a few showers on Friday.  That's it for now, we'll continue to monitor the forecast and keep you updated through the week on Twitter and Facebook. And don't forget to listen to The Weather Lounge, anywhere you find your podcasts!