Update on Flooding Potential in the Northeast

It's Tuesday afternoon and the remnants of Ida continue to press northward, with some of it's rainfall already reaching into the Mid-Atlantic and the Ohio Valley. You can see the system spinning through Tennessee and Kentucky on the radar loop below and it is beginning to interact with a front over Ohio and Pennsylvania. You can see this from the thin stripe of rain running from Dayton to Columbus, OH - eastward into Pittsburgh, PA.

Where this band of rain is setting up may hold the key to where the heaviest rain will fall. So it's important we monitor this feature into tonight. Additionally, a few developments have led us to more confidence in the northern solution we discussed yesterday in our blog. One is a dying thunderstorm complex over the Plains, diving into Kansas and Missouri seen in the national radar loop below:

This system may act to "kick" the remnants of Ida a bit farther north as this energy is ingested into the upper level pattern. Also, an upper low over the Canadian maritimes will likely give what's left of Ida just enough room to push further north, rather than squeezing it south and out to sea quicker. This is because a small piece of this upper low pushes across northern New England tonight, allowing the larger parent low to retreat north a bit.  See below:

Look at how the upper low in eastern Canada relaxes north a bit on Wednesday after the small wave passes Tues night.
Model images Tropical Tidbits.

So, the combination of the Plains thunderstorm complex pushing on Ida's remnants and a small relaxing in the upper low in Canada, will likely work to keep the heaviest rain swath along and just north of I-95. There are other interactions that will work to enhance rainfall from West Virginia into eastern PA and Connecticut, but for the most part, it involves pushing a moisture-laden tropical air mass northward over a front drapped across the Mason-Dixon into Central NJ.

Supporting this analysis is the forecast guidance, with the total rainfall amounts shown below. Note how the models are coming into better agreement on the placement of the heaviest rainfall. 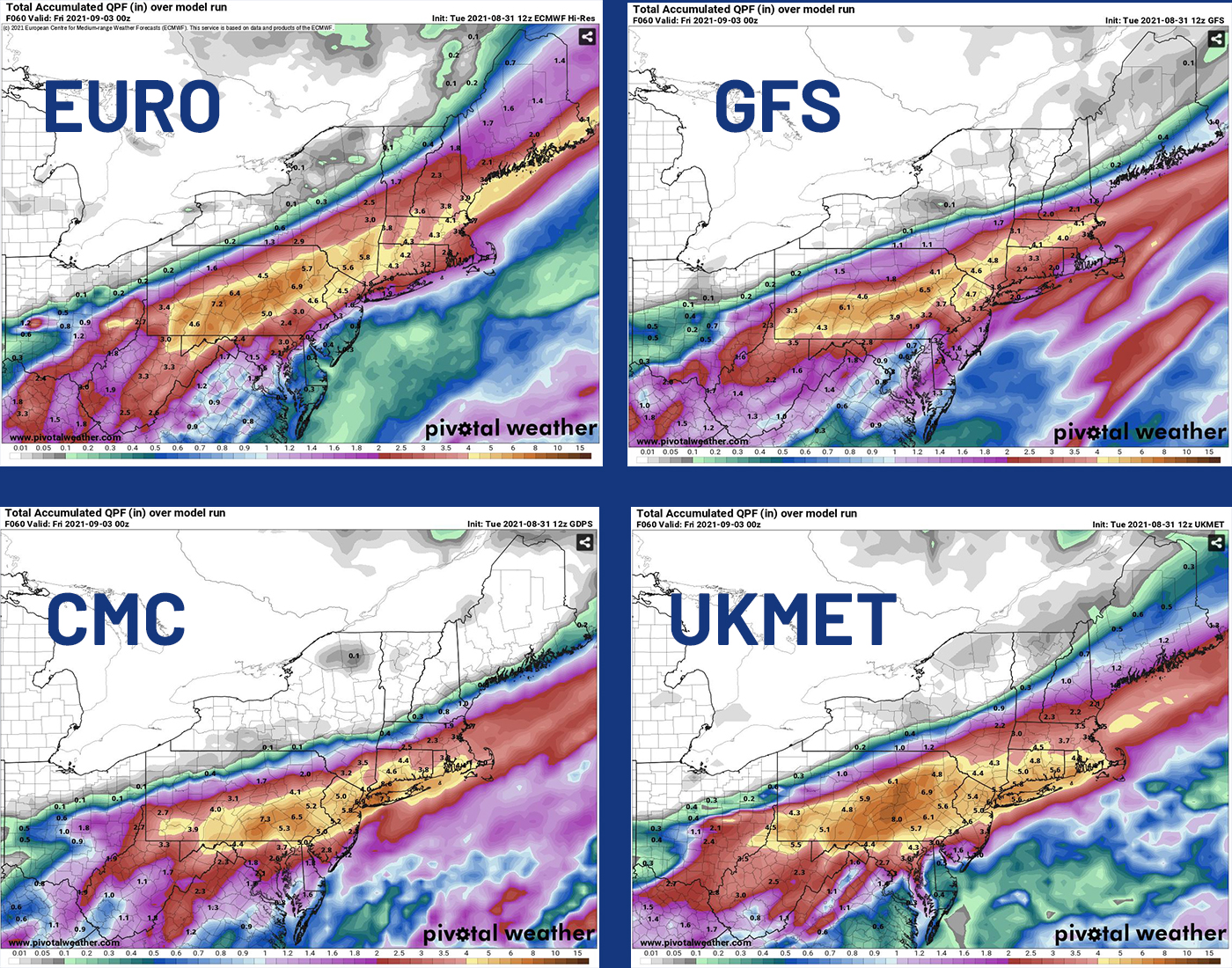 In general, amounts of 3 - 6" of rainfall can be expected north of the Mason-Dixon line into PA, northern NJ, and southern most New England, with locally higher amounts due to the tropical origin. The problem is that this rainfall will largely fall over a 4 - 6 hour window late Wednesday into Wed night. Plus, many of these areas are already saturated and don't need more rainfall. As a result, flooding will be a big issue. Street flooding and small stream/creek flooding will be an almost certainty. Major rivers will also have a flooding concern as this rain occurs over a large area and pretty much basin-wide. Not to mention, for areas in MD into DE and south NJ, enough "spin" from the system make allow for a few tornadoes with any stronger thunderstorms. We'll have more tomorrow, but please stay safe if you encounter any flood waters.