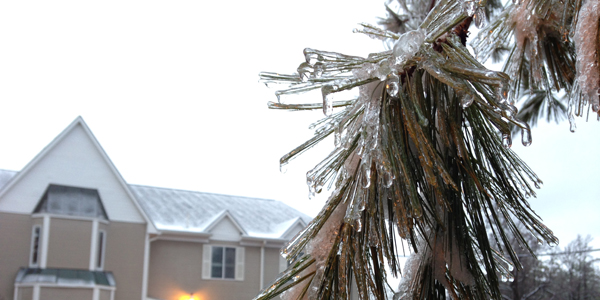 What is Freezing Rain?

The heart of winter is upon us, and although rain may seem like a break from snow removal operations during season, it can be treacherous if it falls as freezing rain. But just what is the difference between freezing rain and "plain old" rain?

Freezing rain is precipitation that is observed to be “plain rain” when falling, however during its journey from cloud to the ground, it encounters a shallow layer of at or below freezing air above the surface. As a result, these seemingly innocent droplets of water become supercooled, meaning they reach freezing to below freezing temperatures while remaining in liquid form. Once these supercooled droplets come in contact with at or below freezing surfaces, like pavement, power lines or a car, they form a sheet of ice. Although freezing rain can be experienced anytime from November to April, the Mid-Atlantic and Northeast regions typically experience their peaks in such activity in January, while the Midwest often has their peak in February.

There is a common misconception that tiny, pinging balls of ice that fall during the winter, also known as sleet, is freezing rain. The diagram below shows the difference between all types of precipitation. Notice how sleet only travels through a shallow warm layer to cause some melting, but then proceeds to travel through a thicker layer of cold air (than freezing rain does), allowing the precipitation to completely refreeze. In addition, sleet often accumulates much like snow but is much denser, while freezing rain glazes surfaces with ice. 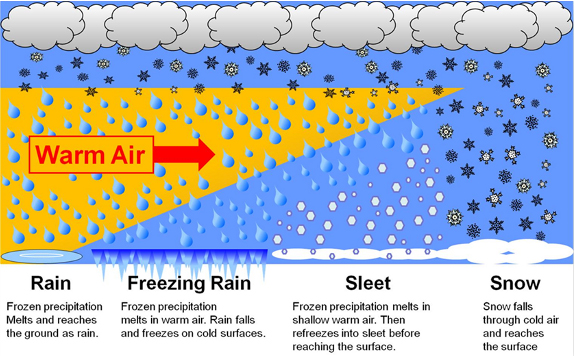 So next time you walk outside and sigh in relief that it’s “just raining” and not the white stuff falling, double-check the recent air and surface temperatures, as you may just encounter an ice rink!