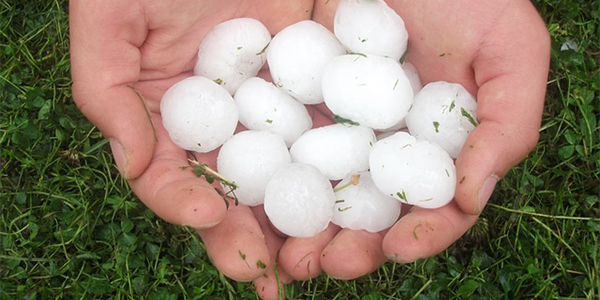 How Does Hail Develop?

When a thunderstorm rumbles through your area, a myriad of associated hazards are on the table. Depending on the atmospheric ingredients in place at the time, strong storms can bring damaging winds, torrential rain, and in particular instances, tornadoes and large hail. While a significant majority of hail is often the size of pea to penny size, or ¼” to ¾”, more robust storms can produce much larger hailstones. The largest that has been recorded in the United States, occurred back on July 23rd of 2010. The record shattering hailstone tipped the scales at nearly two pounds and was eight inches in diameter! Fortunately hail this large is extremely rare, however hail that is the size of pennies to quarters, around ¾” to 1”, is still fairly common and can cause damage to cars, roofs, siding, and vegetation. Hail damage can be further enhanced by the presence of strong winds that can accelerate the hailstones to higher velocities. 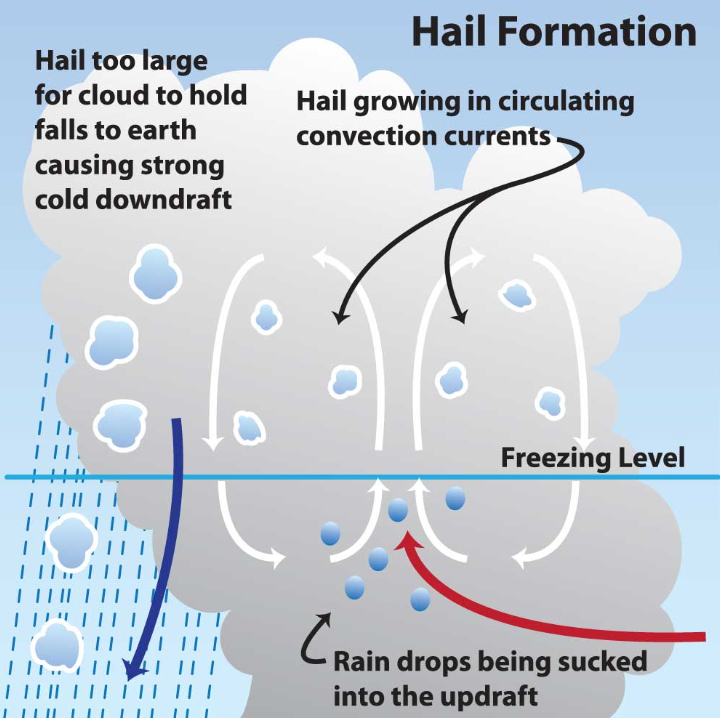 The life of a hailstone usually begins as a humble raindrop, however rather than falling directly down to the ground, sometimes a storm begins to lift these droplets higher into the sky with vertically rising pockets of air, known as updrafts. Updrafts typically develop when the sun heats the surface of the earth, and in response, the lower layers of the atmosphere become buoyant, ultimately resulting in rising bubbles of air similar to a hot air balloon, or a lava lamp. These rising bubbles of air are more intense in thunderstorms and can lift the raindrop to higher and higher heights. As the raindrops rise, temperatures begin to fall, however not all water droplets freeze, even as temperatures of the droplet fall below 32 degrees Fahrenheit. This leads to raindrops that are comprised of supercooled water, or water that remains liquid despite being below freezing! Simultaneously, a few of the raindrops do freeze, which act as a seed for a hailstone will grow upon. The aforementioned pea sized ice particle then collides with nearby supercooled water droplets, which freezes on contact, adding another layer to the growing hailstone. This process creates multiple layers of ice on hailstones, similar to an onion. As the hail gets larger and subsequently heavier, the updraft the stone is relying on to keep it aloft eventually becomes too weak. As a result, the fully developed hailstones begin to fall towards the ground, but their difficult journey is far from over.

On the way down, temperatures begin to rise rapidly and melting beings. If the atmosphere is too warm, this melting begins very high in the sky and by the time the hail gets to the surface, it melts back into raindrops. However, if the freezing layer is closer to the surface, melting is limited, and the hail will survive the journey to leave a lovely dent on your car. 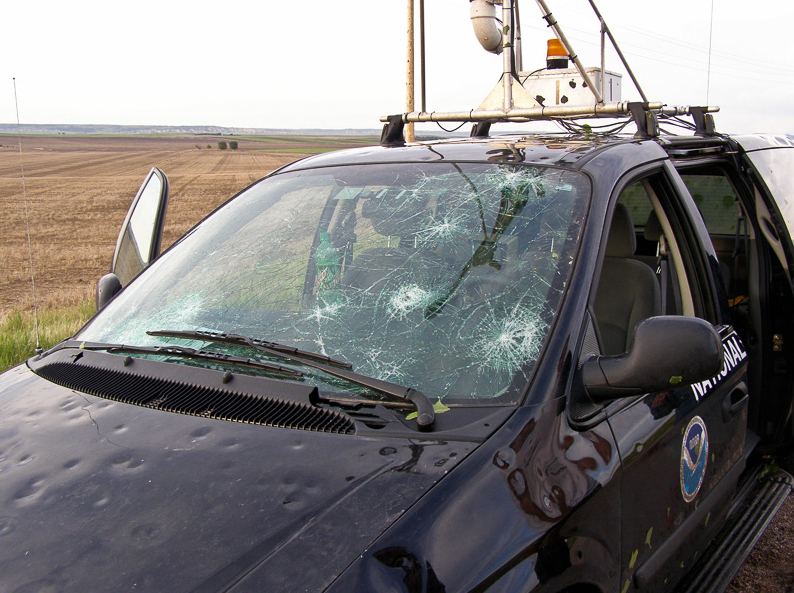 Given updrafts that lift hailstones depend on warm, buoyant rising air, one would guess the thunderstorm capital of the United States, Florida, would take the top spot as the hail capital... however this is not the case. This is because the freezing/melting layer is normally very high in Florida, which melts the potential hail back into raindrops before reaching the ground. The ‘sweet spot’ for hail is the Great Plains, where warm surface air and cold air aloft frequently meet. Not coincidentally, this is also the home for Tornado Alley, as tornadoes also require powerful updrafts to develop. However, a sneaky way to get a hail event when the freezing / melting layer is very high, is by simply making the ground ‘higher’. This happens in the Rockies and the higher peaks of the Appalachians, where measurable accumulations of hail are not as uncommon as you would believe.

At times, confusion can arise between hail and sleet, which are both balls of ice, however they have completely different origins. Sleet does not rely on rising warm updrafts, but rather is when a raindrop or completely melted snowflake falls through a below freezing layer near the surface and turns into a small ice pellet. While sleet can be a nightmare to remove from roads and parking lots, it rarely gets as large as a pea, and therefore is extremely unlikely to cause damage to property (unlike hail).