Measuring snowfall sounds like an easy task at first, but a lot more work is involved than it would seem. Plenty of snow-lovers want to quickly run into their backyard and know how much snow fell by excitedly sticking a ruler in the snow. Seems easy, right? Unfortunately, there are many problems with this method and it leads to inaccurate totals. Not only is this misleading, but it can also be detrimental to those who rely on snowfall data for a living, such as landscapers and snow contractors. That's why many turn to Certified Snowfall Totals® by WeatherWorks for reliable and certified reports.

Measuring snowfall blindly or without any guidance immediately runs into several issues. In windy snow storms, for instance, drifting and/or blowing snow from other structures is common. Thus, measuring in a crowded space will lead to many different “totals”. Measuring too late after snow has stopped is another issue. This causes low measurements relative to the real total. If there is a need to measure on the fly, an open field or space is the next best option by averaging a few measurements shortly after the snow stops.

However, thanks to the National Weather Service, there is an official method to perform measurements that best represents how much snow really fell. The most basic tool to start with is a flat, white board (preferably marked with a flag or other marker) that is laid in an open area on grass away from structures/trees. Why does it need to be white? The reason is that lighter colors reflect a lot of sunlight instead of absorbing it (such as darker surfaces). This leads to melted snow on contact. This is why roads, parking lots, and many other paved surfaces typically have lower snowfall amounts and is why nobody should ever measure in these spots for an official measurement. 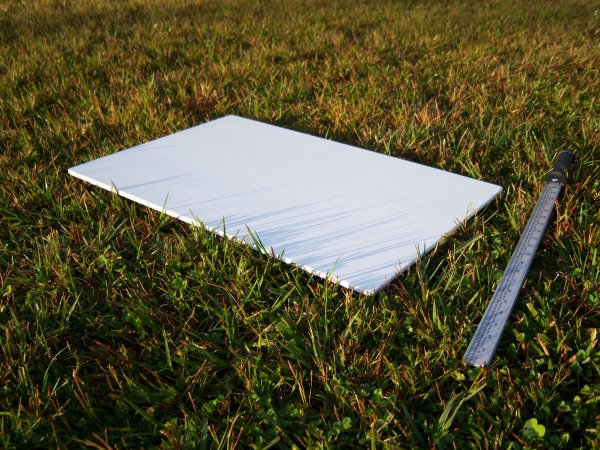 Example of a snowboard (courtesy of the NWS)

So we have a board and a ruler, that should be it right? Not quite. There are certain times of the day to report measured snowfall. Typically, 7 AM is the time to report it after a measurement is taken whenever the snow had stopped to the nearest tenth of an inch to avoid compaction, drifting, and/or melting. If multiple events are occurring within the 24 hour period, take the usual measurements right after any period of snow ends but do not clear the board, wait until 7 AM to clear the board like any other event. Observers also measure snow depth (old, compacted snow combined with new snow) but this is done by averaging multiple measurements in an open area, not on the snowboard.

Marginal events where temperatures are near freezing obviously frustrate this whole process. In this case, several hours of snowfall that leads to accumulation under a tenth of an inch will be reported as a trace; same goes for any new snowfall that remains under that same threshold. When it comes to transitions from snow to rain, snow is measured just before the switch occurs and during wintry mixed events, snow and sleet are typically measured together.

Observations are key to any wintry event and measuring them correctly is critical to various operations that rely on their accuracy, such as the landscpaers and snow contractors we mentioned earlier. Here at WeatherWorks, over 30 meteorologists spend countless hours collecting snow totals from various sources over a 24-48 hour span after any snow event. We do a thourough quality control check to ensure our zip-code based snow totals are as accurate as possible. To learn more about our service, visit CeritifedSnowfallTotals.com and request a demo today!