It’s hard to believe that ten years have passed since Hurricane Sandy brought destruction to much of the eastern seaboard, most prominently in the Mid-Atlantic to southern New England. It would take months to even years to recover from the destruction brought on by Sandy’s record storm surge. Water inundated homes, roadways, and even the New York City subways. In its wake, over 8 million customers were without power throughout the impact region and produced $69 billion in damage ($81.9 billion in today's dollars)…the second costliest hurricane up to that point in U.S. history.

Sandy's track along with rainfall amounts and instensity based on the Saffir-Simpson Scale.

Sandy became a tropical storm on October 22, 2012 when it organized in the southwestern Caribbean…one week before making landfall in New Jersey. Intensification was slow at first for the new storm before a trough over the Gulf of Mexico accelerated it northeastward toward Jamaica. Sandy strengthened to a Category 1 hurricane shortly before making a brief landfall on Jamaica, then underwent rapid intensification and reached Category 3 status before slamming into Cuba on October 25th. The mountainous terrain of the island took its toll on Sandy, weakening it to a Category 1 hurricane, and briefly a tropical storm on October 27th.

Outlooks for Sandy’s possible impacts on the Mid-Atlantic were foreseen as early as October 22nd, when it was still a tropical storm headed toward Jamaica. At the same time, meteorologists (including our very own at WeatherWorks), mentioned the potential for Sandy to make landfall in the U.S.. On October 23rd, WeatherWorks sent out our first statement about "Significant Storm Potential" for Sandy, mentioning the increasing probability of the cyclone making a northwestern turn once in the open Atlantic and impacting the Mid-Atlantic. As early as October 22nd, the European Model showed this northwestern turn into the East Coast, and remained remarkably consistent with the track in the days that followed.

Radar loop from October 29th as Sandy made landfall in New Jersey.

Once the storm was north of the Bahamas and had strengthened back to a Category 1 hurricane, Sandy continued to grow and tropical storm force winds extended out 100 miles from its center. Meanwhile, a blocking pattern over the North Atlantic on October 29th prevented Sandy from going out to sea, altering its track toward the Mid-Atlantic coast. At the same time, a trough over the the United States dug into the Ohio Valley and helped to accelerate the hurricane to the northwest. Just before making landfall near Brigantine, NJ (with an incredibly low pressure of 946 mb) later that day, Sandy transitioned into an extratropical cyclone, however that did not lessen its impacts in any way. At this point, the size of Sandy’s wind field was nearly unparalleled, with tropical storm force winds extending 400 miles out from its center. Damaging gusts also expanded their reach as Sandy made this transition to essentially a extremely powerful nor'easter. This massive wind field would also contribute to storm surge of historic proportions that built up along its path. Sandy gradually weakened after making landfall as its center pushed inland into southern Pennsylvania. Over the next two days Sandy’s center went as far west as Ohio before it became disorganized and its remnants merged with a low pressure in eastern Canada.

Due in part to its extraordinary scope, Sandy had a large variety of impacts throughout the eastern seaboard. Water level rises were extreme along coastal areas of the Mid-Atlantic and Northeast. In fact, water levels of 13 - 14 feet inundated coastal locations of western Connecticut, around New York City, and the Jersey Shore.

The New York City metropolitan area incurred nearly $19 billion in damage, which included impacts to city agencies and several transit options; namely the subway system which saw historic flooding of eight tunnels. Locations along the Manhattan waterfront were under several feet of water, with further inundation of hundreds of buildings in Manhattan itself. Additionally, at least 100 homes were destroyed due to a fire that broke out in Queens, on top of the destructive storm surge already seen in the area. Staten Island saw widespread devastation along the southern shore, with businesses and residences heavily damaged and whole blocks of housing swept away by the storm surge. Media reports referred to this area as ground zero for damage due to the severity of damage. Surge damage continued onto Long Island, where more than 2,000 homes were deemed uninhabitable.

Moving south, impacts to the New Jersey coast were deemed catastrophic and unprecedented in the state’s history, with the worst storm surge damage occurring in Monmouth and Ocean counties. Entire communities were overtaken by water and sand, with homes washed away from their foundations and boardwalks destroyed. Power outages lasted for several weeks, with over 5 million residents without power. Over 300,000 homes were damaged or destroyed, with over 20,000 of those deemed uninhabitable. Almost 20,000 businesses suffered severe damage worth over $250,000, with some reporting total losses. Around 48,000 trees had to be removed or cut down in order to restore power, according to the New Jersey Public Service Electric and Gas Company.

The severity of the surge in New Jersey was remarkable. In Mantoloking, a majority of structures were flooded, badly damaged, and even destroyed. A path through the barrier island was carved by the surge, creating two new inlets. In Seaside Heights, the Casino Pier and Funtown Pier were both destroyed. Long Beach Island saw damages to nearly every seaside home, with the communities of Union Beach and Sea Bright seeing similar types of damage. Storm surge also created rises in the Hudson and Raritan Rivers, resulting in the flooding of Jersey City and Sayreville. Both required the assistance of the National Guard to rescue residents from the rising waters. About half of Hoboken was reportedly flooded, with 20,000 residents surrounded by water at peak surge and over $100 million of damage reported. The nuclear power plant in Salem County was automatically shut down when four out of six pumps failed. The rail operations center of the New Jersey Transit Authority in Kearny saw up to 7 feet of water inundation. This damaged several locomotives and rail cars and kept rail services from operating for several weeks.

Sections of New England saw significant impacts as well, though on a lesser scale than that of New Jersey and New York. Nearly 3,000 homes were damaged along coastal Connecticut. Rhode Island saw major coastal flooding that rivaled what was seen in 1991 with Hurricane Bob. A 50 foot barge sank in Bar Harbor, Maine, with three more vessels sinking or set adrift along coastal Maine. The most significant effects due to Sandy across New England came in the form of widespread power outages and downed trees, with Connecticut feeling the brunt as 600,000 lost power.  While wind damage, flooding, and storm surge impacts were widespread across the Northeast, Hurricane Sandy actually produced blizzard conditions in West Virginia into North Carolina. Heavy, wet snow brought down trees and the build-up caused structures to collapse. In fact, Richwood, WV saw up to 36 inches of snow with up to a foot reported as far west as eastern Kentucky. Strong winds also ripped across these states, and even resulted in power outages as far west as Wisconsin! 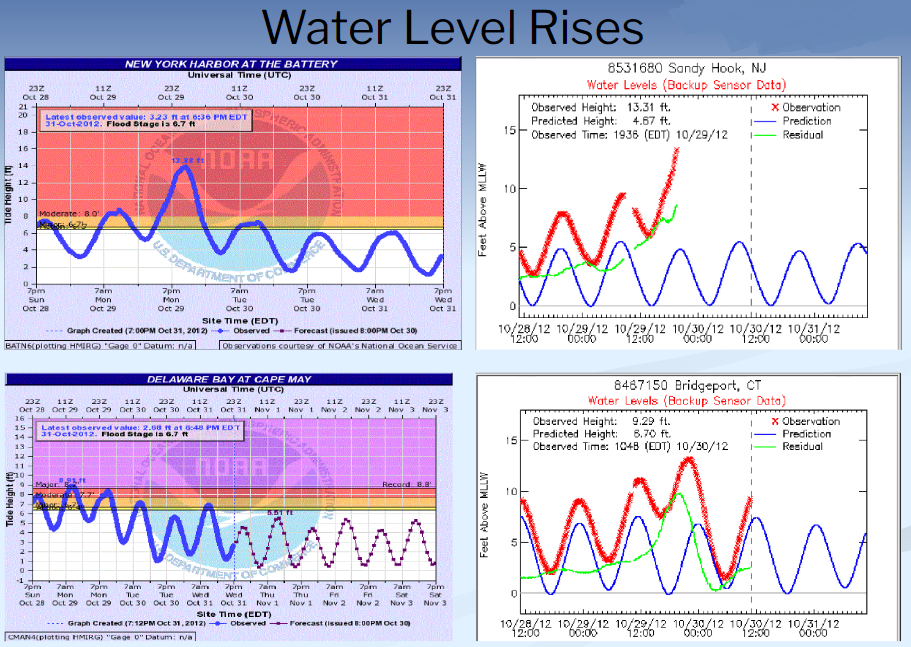 In the days and weeks following Sandy, despite the hardships and losses felt by people of various backgrounds, communities came together to help those affected and to rebuild. As the months and years passed by, life slowly began to get back on track for many of those impacted by Sandy. Houses were rebuilt. Businesses reopened. For some though, life was altered forever. Whether it be the loss of a loved one or the indescribable loss of priceless momentos, the scars left from Sandy still live on ten years later.