Hurricane Tracks and Life Cycle in the Atlantic

Do you know where hurricanes originate from?

Many hurricanes tend to begin their stages of life in the African rainforest, then move west into the eastern Atlantic. While this east to west movement may seem strange, it's perfectly normal for the tropics based on global circulation patterns. However, it may seem a bit odd as most storms travel west to east across the United States (also totally normal for reasons we won't dive into within this blog). Take a look at the tropical cyclone track map below. These are the typical paths hurricanes take moving westward across the Atlantic and Pacific. 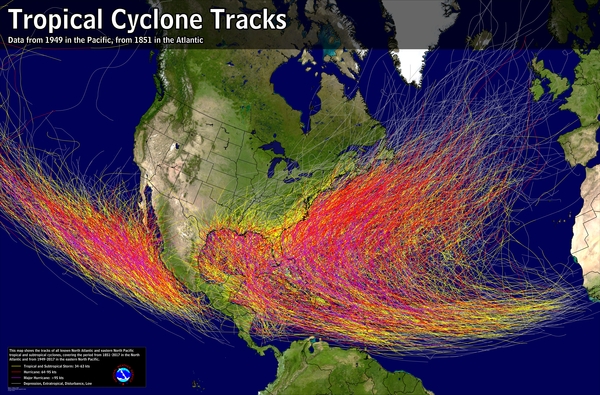 This image shows every hurricane / tropical system since 1851 in the Atlantic (since 1949 in the Eastern Pacific). You can see many storms begin off the coast of Africa, then progress westward. From there, they either recurve north or move into the Caribbean and the Gulf of Mexico, depending on steering flow. This image was found at https://www.nhc.noaa.gov/climo/ along with other maps.

Hurricanes form in the tropics because the ocean water is warm (to "fuel" the storms) and usually there is limited or no wind shear to tear the storms apart (shear is the change of wind speed or direction with height in the atmosphere). When the storms form, they typically take 3 different tracks as they push west, 1. recurving out to sea, 2. impacting the Southeast US and up the East Coast, or 3. continuing west towards the Gulf of Mexico.

Breaking these tracks down further, hurricanes are able to go up the East Coast of the U.S. when there is a high pressure in the Central Atlantic called a "Bermuda High" (usually centered over, you guessed it, Bermuda). Since high pressure spins clockwise, storms travelling north of the Greater Antilles can be guided northwest, closer to the East Coast and even making an impact. Other times, there is a dip in the jet stream or tough over the Eastern U.S. coast, which can help recurve tropical systems out to sea. Hurricanes that travel into the Gulf are usually forced by a Bermuda High that is farther south, or winds high in the atmosphere that push it west. These storms are certainly ones to watch because the only way out is by hitting land and they typically strengthen in the warm Gulf waters.

Speaking of rapid intensification, let's briefly get into the life cycle of hurricanes. Many times, hurricanes begin their life as clusters of thunderstorms moving off of Africa that have a bit of spin. As the cluster moves west, the warm ocean temperatures and low wind shear of the tropics can help the storms maintain themselves. Once thunderstorms begin to fire up around a center of low-level circulation, it will most likely become a tropical depression. As the depression continues to organize, the National Hurricane Center monitors satellite and hurricane hunter data (depending on where the storm is) and once sustained winds reach 39 mph within the system, it's deemed a tropical storm and given a name. If the water continues to be warm with little to no wind shear, the tropical storm will continue to better organize itself, becoming a hurricane when sustained winds hit 74 mph or more (however, it keeps the same name).

This image shows a hurricanes life cycle from the National Hurricane Center. It can be found from the slideshow associated with the link. file:///C:/Users/Staff/Downloads/2012_02nhcL311_hurricaneLifeCycleHazards.pdf

Hurricanes are complex storms that can only develop in favorable conditions, including little to no wind shear, warm ocean water, and avoiding land masses. If a hurricane interacts with wind shear, land, or cold water, it can be detrimental to its life cycle. In the event that a hurricane is in the Atlantic or the Gulf, it's a good idea to keep tabs on it. Even if your specific location is not going to see a direct impact, you can still feel some effects of the storm. Whether it is remnant tropical rain and gusty winds, or even rip currents, hurricanes are powerful systems that can certainly affect weather conditions while being hundreds of miles away.