June 2021: Warmer than Normal in the Mid-Atlantic and Northeast

Summer was in full swing for June, which ended up on the warmer side thanks to two heat waves to start and end the month. The Mid-Atlantic and Northeast caught occasional breaks from the humidity in-between, and just a handful of days actually saw severe weather. Either way, the season began on a warmer and more humid note than usual.

The cool off from late May that resulted in an unusually wet and cloudy Memorial Day weekend bled into early June, but the pattern was quick to warm. Temperatures peaked in the low-to-mid 90s across much of the I-95 corridor between June 5th and 8th, which marked the first heat wave. Daily records were broken on the 5th for Boston, Philadelphia, Scranton, Baltimore, and Washington, D.C. This heat helped fuel stormy days, especially on the 3rd when an EF-1 tornado touched down in Long Green, MD (north of Baltimore), with winds estimated at 95 mph. Thankfully, no injuries or structural damage were reported, although hundreds of trees were reported to be snapped or downed. 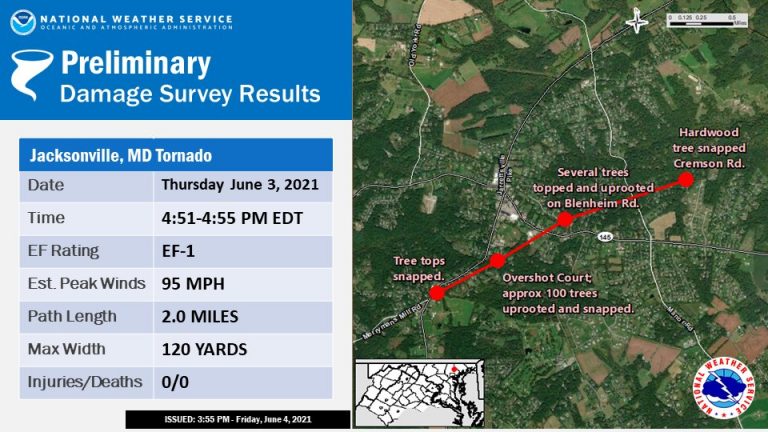 Tornado survey results from the Long Green, MD on June 3rd from the NWS.

Pleasant weather returned by the second week before a series of frontal passages brought active weather for the middle of the month. The 14th in particular, saw two boundaries that brought heavy rain to much of the region, first in New England and then across the Mid-Atlantic. Upwards of 0.50-1.00” was recorded for many, with nearly 2.00” at Reagan National Airport, marking one of the wettest days across the Northeast for June. Severe storms also developed the same afternoon, producing damaging winds across Pennsylvania, New Jersey, and Maryland. This front was useful in other ways too, keeping Tropical Storm Bill well off the East Coast.

The pattern afterwards kept much of the region’s temperatures around normal into the 3rd week as Canadian high pressure settled in. However, a southerly flow caused the heat and humidity to return after the 19th, which resulted in some severe weather on the 21st. Tropical Storm Claudette fortunately stayed offshore during this time, but after a disturbance brought tornadoes to the Midwest, an organized line of storms formed along the front, causing widespread wind damage across New York, Pennsylvania, and Maryland (the strongest didn’t quite make it past the Delaware river or into New England).

Abnormally cool weather then settled in, resulting in rather low dew points for even June standards along with sunny days and clear nights. Overnight temperatures fell into the 50s and even 40s (including cities) on the 23rd and 24th, which broke some records. Allentown, PA bottomed out at 46 degrees on the 23rd, while Albany dipped to 45 degrees the next morning. Yet despite the reprieve, a second heat wave took hold to close out the month, which also led to another widespread damaging wind event across the Northeast on the 30th.

Overall, the month was anomalously warm further north, with Boston, MA measuring its warmest month on record at an average of 74 degrees while Hartford, CT wasn’t far behind in second. Even parts of the Mid-Atlantic were 1 to 2 degrees above normal. With the exception of around Washington, D.C., most of the region fell below normal on rainfall totals as most cities saw 2.50-3.00” for the month.