Looking at the year, it has been abnormally dry across most of the Midwest. Parts of the area, especially in Illinois have been in a drought, and it is no fluke as a severe - extreme drought continues to roll on in Northern Illinois and along the Wisconsin border. As the month of June began, hot and dry weather became dominant quickly in the Midwest, but plenty of rain did arrive to the areas which needed it the most. However, the rain also was accompanied by some severe weather.

June began hot and dry as temperatures quickly soared into the upper 80s and low 90s from June 3rd - June 13th. During this stretch, high temperatures were nearly 10-15 degrees above normal and peaked on June 12th when it was 93 degrees in Chicago. On top of this, there was a total of only 0.01" of rain in Chicago through June 11th, which resulted in a widespread moderate-severe drought. However, changes began on the 11th as thunderstorms developed to the west and brought some much-needed rain to parts of the area, especially near DeKalb. This was accompanied by severe wind gusts as well as some flooding. Locally around DeKalb, trees and power poles were brought down from the wind coupled with 2.74" of rain which fell in just one hour. These storms diminished but additional storms fired up on the 12th and brought more widespread heavy rain and thunderstorms to the area. Chicago picked up 1.50" of rain, while others to the west received locally around 3" again. This resulted in some flooding around the area, then it dried some through June 19th, despite a few additional showers. A day later on the 20th, a severe outbreak occurred with widespread wind damage and even a few tornadoes. One of the tornadoes was a strong EF-3 which struck just west of Chicago. More information about the tornado and an in-depth look can be found here. Otherwise, this brought a widespread 1-2+" of rain to the area helping the drought situation.

Rounding out the month, it turned very active with showers and storms nearly every day from the 23rd to the 30th. Temperatures were seasonable during this stretch with highs in the upper 70s to low 80s. Since it became very active, much of Chicago and the surrounding suburbs ended with a surplus of rain at the end of the month. A total of 6.78" of rain fell at Chicago O'Hare which is 2.68" higher than normal. This was enough to eliminate most of the drought, but along the border of Wisconsin, the drought remains extreme. 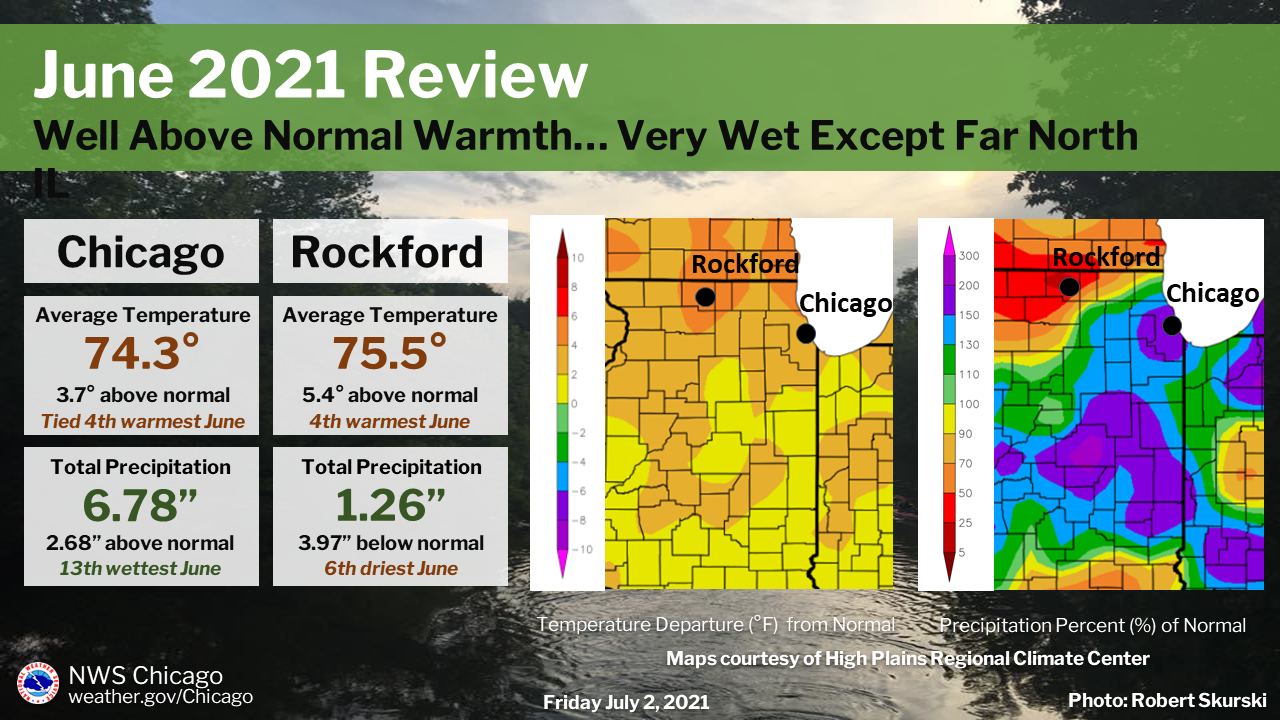 Unlike Chicago, Indianapolis was not in a drought, although it has been relatively dry lately. The month of June began on the cooler side with temperatures in the low to mid 70s. This was a result of some rain which stuck around on both the 2nd and 3rd and dropped around 1.00". Afterwards, it did warm up a bit into the low to mid-80s and it was also humid, so it definitely felt like summer. Active weather prevailed with a stationary front overhead, bringing showers and storms each day through the 12th. The strongest storms occurred just to the south and west of the region on the 12th, with damaging winds and hail. It then got hot and humid afterwards with temperatures regularly in the mid 80s - low 90s, peaking at 93 degrees on the 12th and 18th. At the end of this hot stretch on the 19th, severe thunderstorms passed through the state with damaging winds, hail up to 3" in diameter and flooding. Indianapolis recorded 2.16" of rain while just to the south, Greensburg and Bloomington received upwards of 5".

Temperatures became more seasonable afterwards as highs were in the upper 70s and low 80s for about a week through June 25th. By then, the heat was on again as highs soared back into the 90s ahead of yet another cold front which brought heavy rain and storms. 1.43" of rain fell on the 30th causing a renewed risk for flooding, especially just south of Indianapolis where it has rained the most. All in all, it was an active, wet month of June with 7.51" of rain falling in Indianapolis, which is 2.56" higher than normal.

From Indiana to Ohio, the weather did not change too much. It began on the cooler side of things with showers and storms almost every day for the first week, then a bit of a warm spell. After heating up well into the 90s during the second and 3rd weeks of the month, there was a large rainmaker. This is the same system that dropped 2.16" of rain in Indianapolis. In Cincinnati, there was a record 2.73" of rain on the 19th, which broke the previous total of 2.60" set in 1946. The farther north you go, the less rain there was as Dayton got about 1.80" and Columbus was just a few tenths. After this storm, there were only isolated showers and storms through the 29th and 30th when another front moved in with heavier rain. Locations near Cincinnati produced about 1.50 - 3.00" of rain, while farther north was a few tenths to 1.00" of rain. All in all, from Dayton and on south, most areas received about 200% more rain in June 2021 than average. More spefically, Cincinnati had a total of 8.63" of rain which is 3.88" greater than normal. Dayton was 0.54" on the positive side with 4.68" total. However, Columbus had a deficit since they missed most of the heavy rain storms. The June total was 2.58" which is 1.75" less than normal. So, it was a wet month overall, but farther north turned drier and drier.