Above Image Courtesy of Wikipedia

Living in the western suburbs of Chicago on a June morning, you put on jeans and a t-shirt and head east, toward Lake Michigan, for a day in the city. Temperatures in the 70s make for a great start, but come the early afternoon, you notice a change. A cool wind blows off of Lake Michigan. You scramble for a sweatshirt as temperatures tumble into the 50s & 60s! Then, as you drive home to the suburbs that night, temperatures are still in the 70s, the same as when you left. What happened? The most likely culprit for the drastic cool down was a lake breeze front. With this in mind, let us take a look at how and why these fronts impact the weather across Chicagoland..

Lake breeze fronts require two main ingredients: a sharp temperature gradient between the land and lake as well as a light wind. The temperature difference between the land and lake is typically the strongest during the spring and early summer. This is because the high sun angle rapidly heats the land while the lake water temperature is still cool from the winter. On a generally calm, sunny day during this time of year the land will heat up, allowing an area of relatively lower pressure to develop. Water does not warm up as easily as the air does, so an area of relatively higher pressure will form over the lake. Since winds blow from high to low pressure, the cooler air from the lake pushes inland onto the warmer land. How far inland the cooler lake air can penetrate depends upon the temperature gradient. The stronger the gradient between the lake and land, the farther inland the cooler air can travel.

(Schematic of a Lake or Sea-Breeze Front. Courtesy of Wikipedia.)

Besides a temperature change, lake breeze fronts are similar to cold fronts in that they can even lead to precipitation. As the cooler, lake air pushes inland, it lifts the warmer air upwards. If the atmosphere is unstable enough, showers and thunderstorms (as seen below) can develop. Even without precipitation, these fronts are easy to detect on radar. Look for a narrow band coming inalnd from the water. So the next time you are heading to Lake Michigan during the spring or early summer, pack an extra layer of clothing! 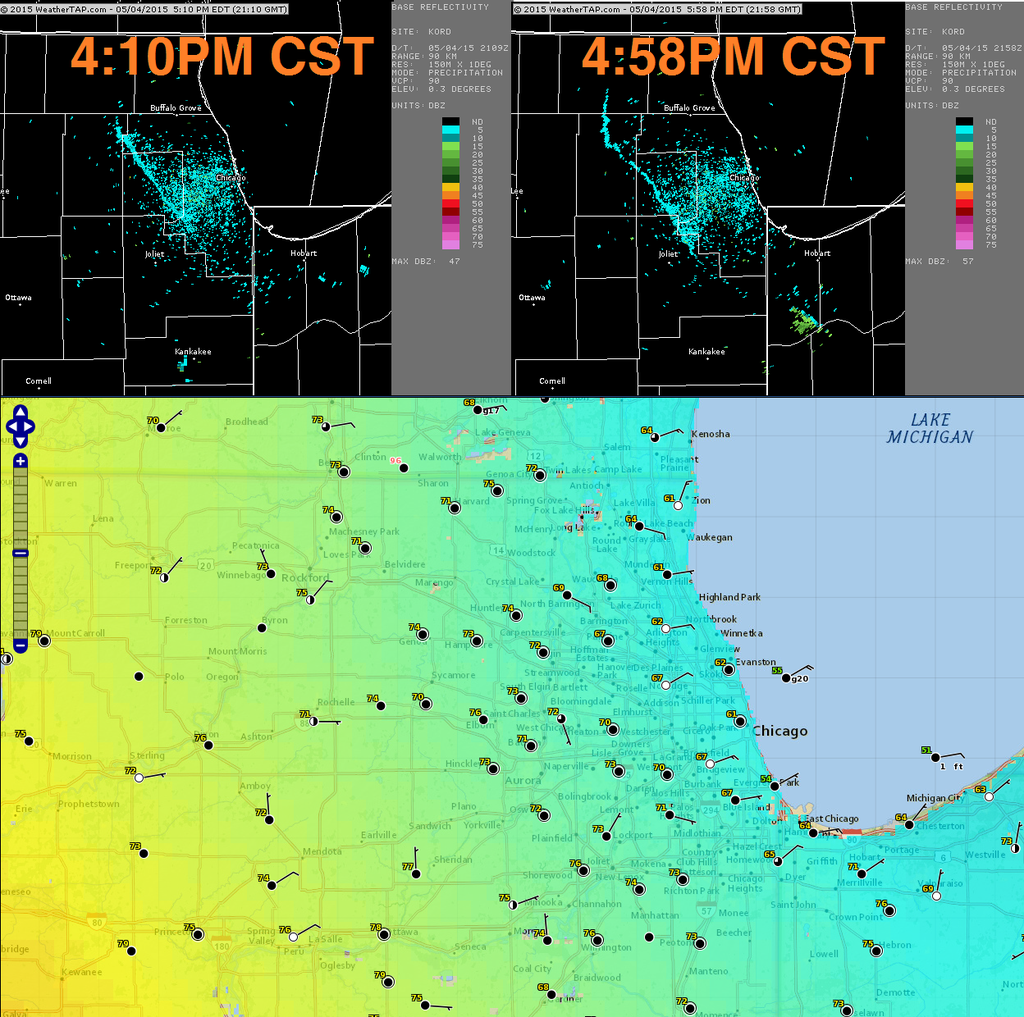