Mild, but Active March in the Midwest

The start of spring was warm and extremely active with less than 7 days of dry conditions across the entire Midwest. This led to average temperatures of 4 – 6 degrees above normal for the month. In terms of precipitation, almost all areas from Chicago to Columbus saw almost double their normal amount for the season with Columbus observing over 5” more than normal! Due to the warm temperatures coupled with an active pattern, total snow accumulation fell below average by only a few inches. 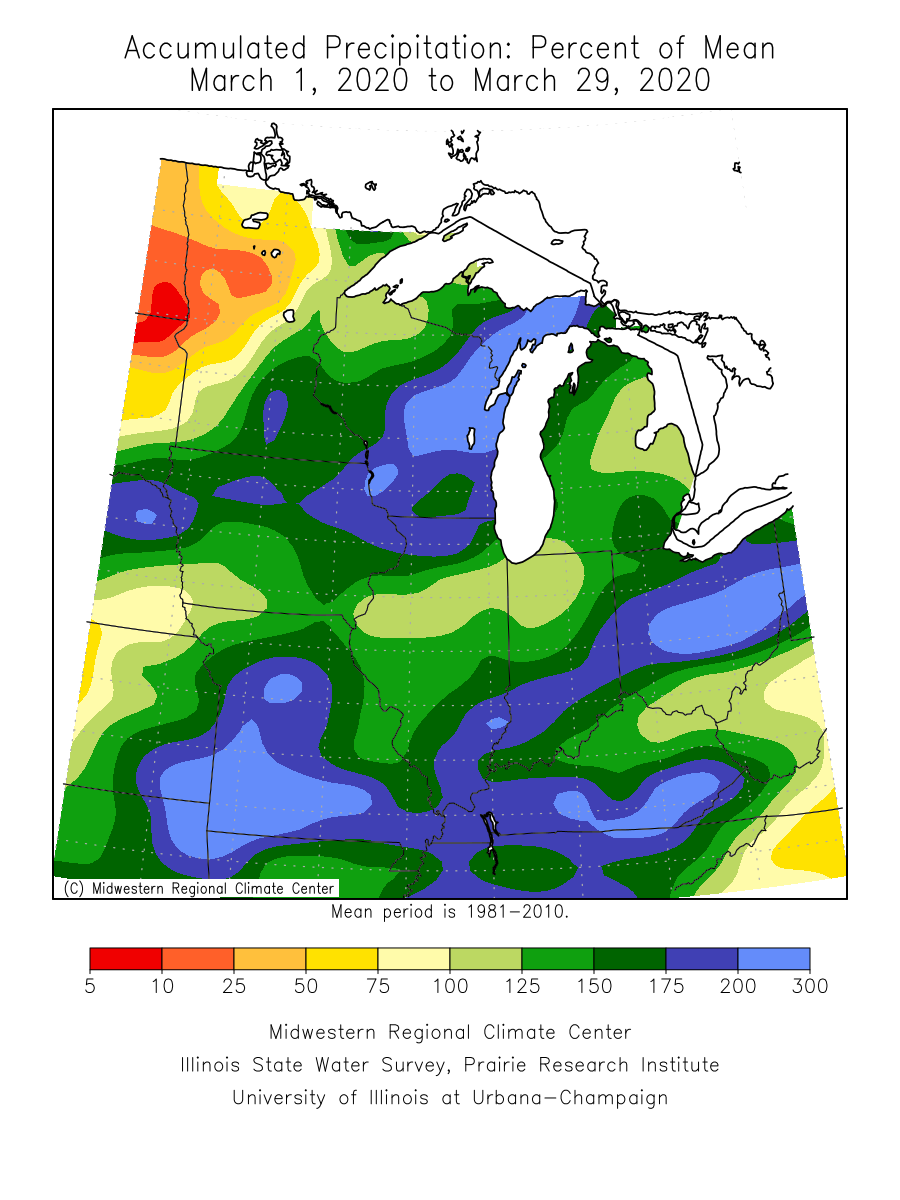 Accumulated precipitation for March 2020. Via the Midwestern Regional Climate Center.

The beginning of Meteorological spring was a rollercoaster in terms of temperatures. The morning of the 1st started off in the upper teens to lower 20s across most of the Midwest. A warm front then pushed into the region during the afternoon supplying well above average temperatures (5 – 12 degrees) as highs rose into the upper 50s to lower 60s. This system continued to push into the Midwest on the 2nd, which produced rounds of showers that generated a few tenths of rainfall. The storm's associated cold front pushed into Chicago during the morning of the 3rd which allowed enough cold air to flip rain to a period of snow. The changeover didn’t encompass all of Chicago as it mainly effected areas between Highland Park on north and west to the Wisconsin border.  This system only delivered a widely scattered coating to <0.5” with the highest totals towards McHenry county.  This same front warmed some as it flew into Indianapolis and eventually Dayton, Cincinnati and Columbus later on the 3rd. 0.50 – 1.50” of rain resulted, which produced areas of poor drainage and roadway flooding.

A colder system revolved in from the north during the morning of the 4th, with rain changing to snow once again in the Windy City as temperatures fell from the lower 60s to the lower 30s. With a little more moisture associated with it, a coating – 1” of accumulation occurred. Above average temperatures then took over during the afternoon of the 5th before a cold front swept through the region into the 6th. This led to scattered rain and snow showers from Chicago to Columbus, but the mixture only produced a few scattered coatings. Very windy conditions (gusts up to 50 mph) developed in the wake of this storm, which produced waves as high as 14-18 ft across Lake Michigan. This caused widespread beach and erosion and flooding along the lakeshore.

After a seasonably cool and dry day on the 7th, well above average temperatures redeveloped on the 8th. Chicago rose to 67 degrees which is 19 degrees above their normal high for this time of year! The warm temperatures continued into the 9th and 10th as a low-pressure system generated widespread rain with totals between 0.50 – 1.25”. The warm and active conditions continued during the 11th-13th with multiple rounds of showers and rain which led to additional totals up to an 0.50”. After this system, a strong and colder storm developed over Chicago and produced a widespread coating – 0.5” of snow. As this storm moved east, it strengthened over Indianapolis and then eventually Dayton, Cincinnati and Columbus. Here, 0.5 – 2.0” of snow fell from moderate to briefly heavy bands of snow and sleet. Overall, areas north of Indianapolis towards Boone County saw the highest amounts across the region with around 2.5”.

Some perfect snowflake formations today in Northern IL. Too bad they were melting too fast to get a crystal clear picture. #ilwx #snow @NWSChicago pic.twitter.com/PIpumDZnqz

Following a cool and dry day on the 15th, another system developed and pushed into the Chicago area during the morning and afternoon of the 16th. This led to light to moderate snow with many seeing a coating – 0.5”, with the highest totals in Aurora and McHenry. This same system warmed up while moving east on the 17th into the 20th, which allowed for periods of heavy rain and severe weather to occur. Rainfall amounts of 1.00 - 3.00” were observed across the Midwest, with the highest over Dayton and Cincinnati leading to some flash flooding. With strong dynamics and instability, severe weather occcurred in Dayton and Cincinnati during the evening of the 19th and into the morning of the 20th. Quarter sized hail and strong gusts were observed, which were strong enough to bring down several trees as well as blow over a tractor trailer.  Rainy and warm conditions continued into the afternoon of the 20th before the active weather met up with cold air. This produced the last bout of wintry weather of the month especially in Chicago and Indianapolis on the 21st and 22nd. A widespread 2-4” of snow fell across Chicago with the highest totals away from the lakeshore. As this system meandered eastward, it warmed up yet again which allowed more of a snow/sleet mixture. 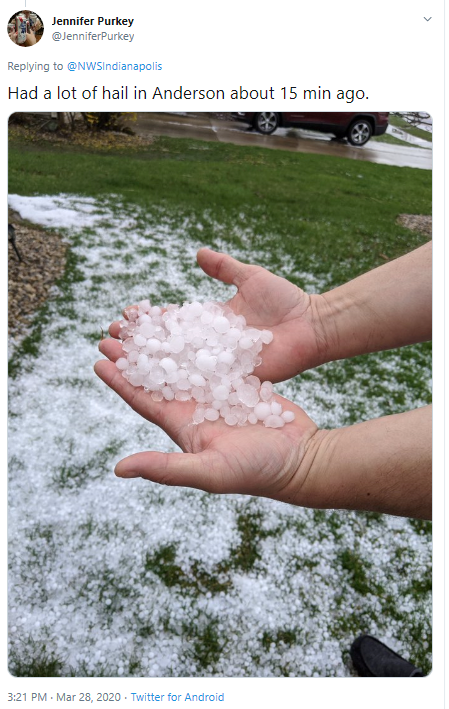 Hail in Anderson, IN on March 28th, courtesy of @JenniferPurkey on Twitter.

After this bout of winter weather, the active and well above temperatures continued into the last week of the month with temperatures reaching the 70s and eventually the lower 80s on the 28th. This warm weather was accompanied by a potent disturbance which generated widespread severe weather and flooding. A tornado even touched down south and west of Rockford, which took down multiple power lines and damaged several homes. This same system produced severe storms during the afternoon and evening on the 28th in Indianapolis, Dayton, Cincinnati and Columbus. These storms led to wind gusts of 60 – 75 mph, which in turn produced muliple reports of trees, small structures and power lines down. In addition to the wind, damage from hail was reported with stones up to golf ball sized (1.75 - 2.0”). Thanks to the warm and moist air mass, these storms dumped over 2.00 - 3.00” of rain in a short amount of time.  As a result, flash flooding quickly developed from Indianapolis to Columbus.  In the wake of this severe weather outbreak, nothing more than a few showers redeveloped on the 29th with blustery conditions and a few flurries in near Chicago.