The start of meteorological spring across the Midwest was a warm one with temperatures mainly 5 – 7 degrees above normal. This caused most systems to precipitate as rain rather than snow. Usually, the region averages 2 – 5” of snow in the month of March, but some barely scraped out 0.1” from Indianapolis to Columbus; however, Chicago did see one event that produced around 2”. In terms of total precipitation, some areas were below, near, and even above average. The winner for most precipitation was the Indianapolis International airport with 3.87” (the normal is 3.43”), while the least was Chicago O’Hare with 1.25” (the normal is 2.40”). Severe weather was also at a minimum this month, but there was one event that produced high winds and some 1” diameter hail, particularly in Indianapolis, Cincinnati, and Dayton. 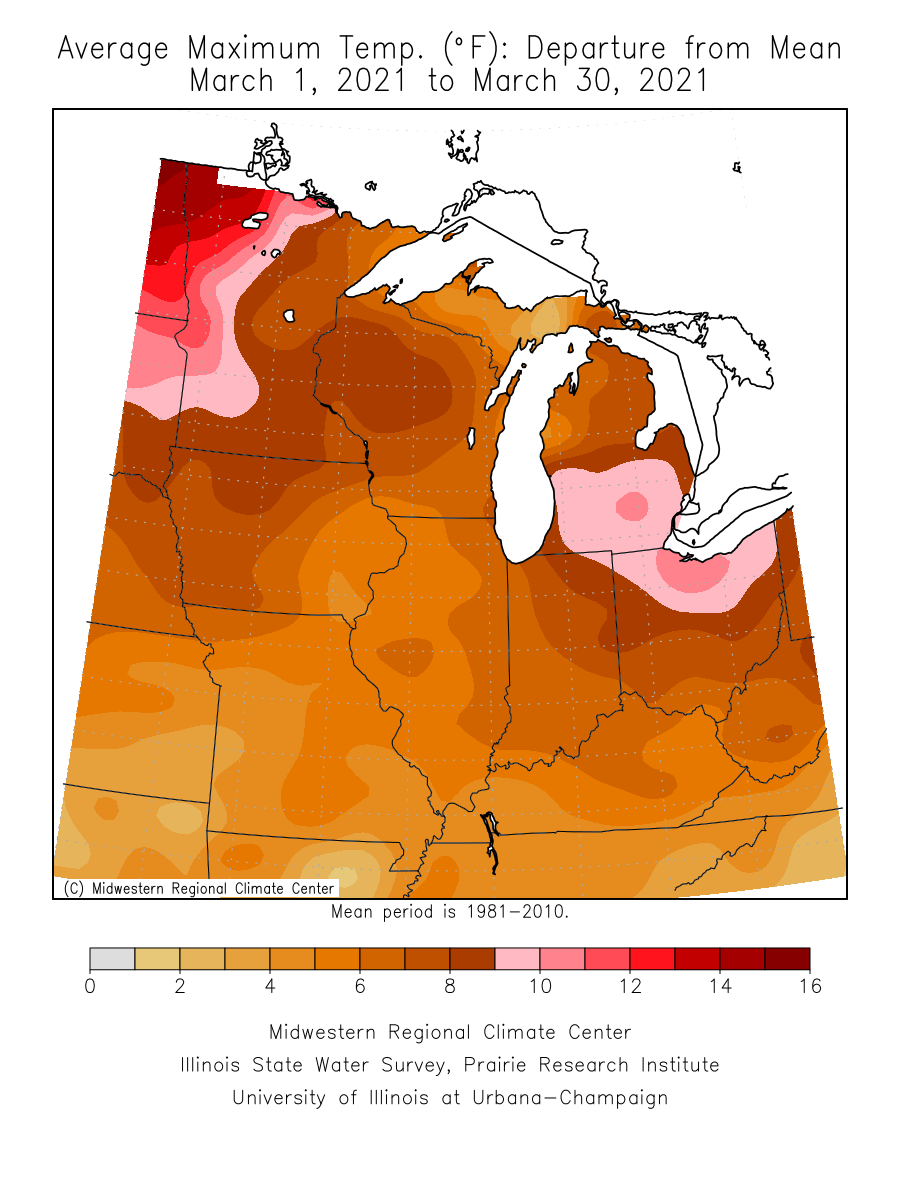 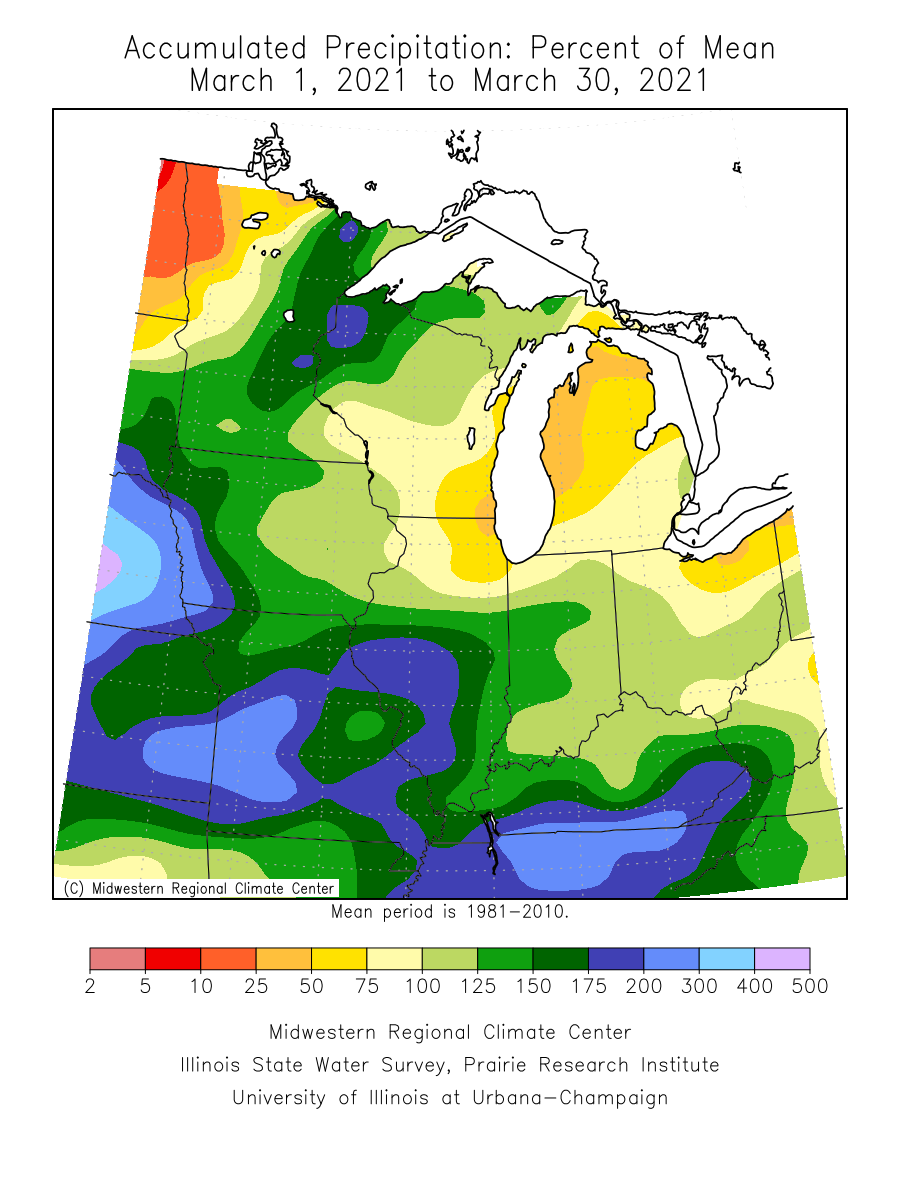 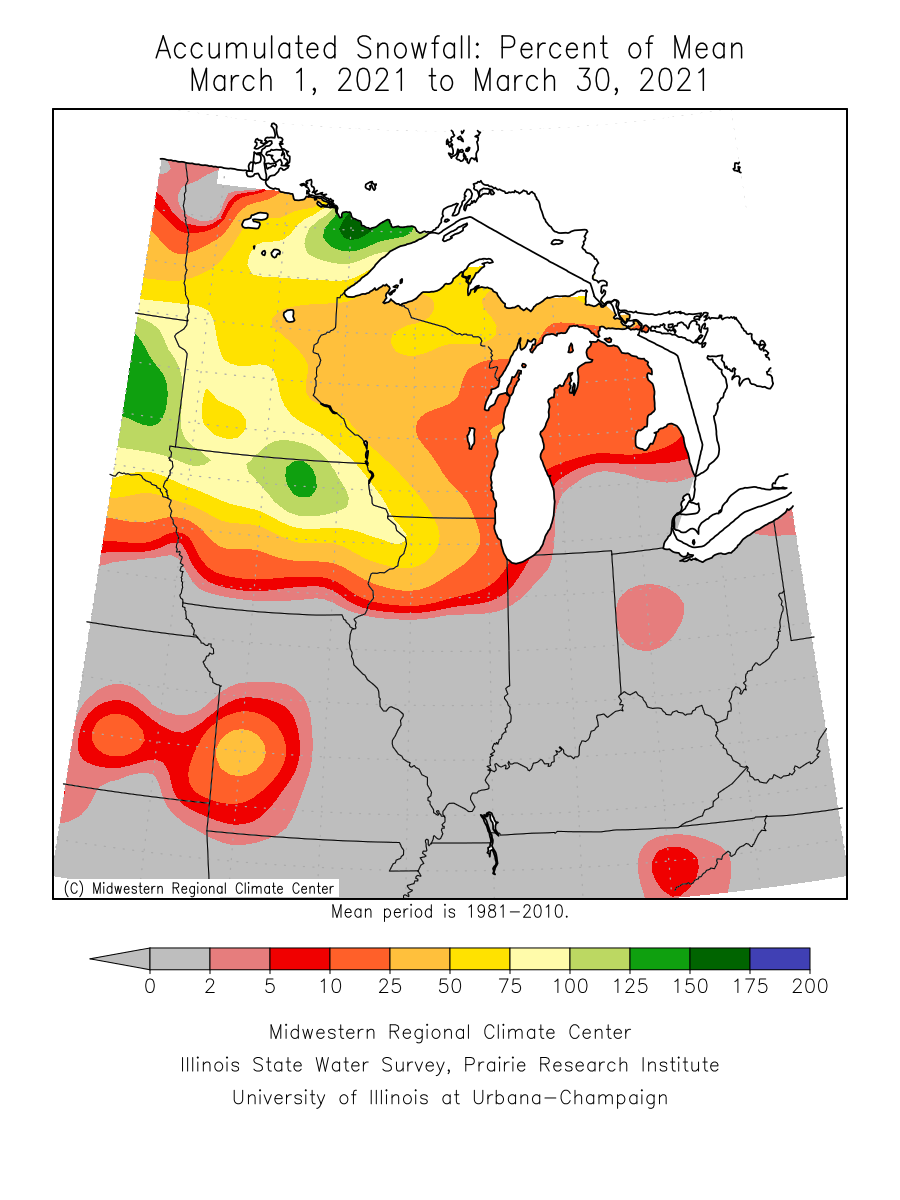 The month began with a mainly dry cold front that caused only a few light rain showers, but the main takeaway was the cooler temperatures that followed. Temperatures were mainly in the 40s on the 1st and 2nd with overnight lows in the 20s and even falling into the upper teens around Chicago. After this, high pressure developed and remained entrenched over the region between 3rd – 9th. Temperatures started off in the 40s and 50s on the 4th before eventually climbing into the upper 60s by the 9th with dry conditions. With not even a trace of rain or snow falling in Chicago and Indianapolis between the 1st – 9th, it was the first time in recorded history the first 9 days of March was precipitation-free.

Then, high pressure broke down as a system blew through the region on 10th and 11th with the focus of the precipitation over Indianapolis, Cincinnati, Dayton, and Columbus with roughly 0.50” of rainfall. Non-thunderstorm winds were the primary concern with gusts as high as 55 mph! A few showers continued into Cincinnati, Dayton, and Columbus on the 13th which produced a few light freezing rain showers, but any glazing was on colder and elevated surfaces.  Chilly and active weather continued into the 14 and 15th which was the coldest and most wintry point of the month. Chicago saw around 2” of snow that fell in a short period of time, before mixing with sleet and freezing rain allowing for icy glazes. This system warmed and weakened as it moved east towards the rest of the Midwest. As a result, only a brief shot of snow, sleet, and freezing rain occurred with some coatings. 1.00 – 1.50” of rain fell in the wake of the wintry precipitation, which led to some brief poor drainage flooding in spots.

The 19th – 22nd turned warm and dry again with temperatures in the 60s to even lower 70s. Temperatures continued to climb into the 70s for all areas (except Chicago) on the 24th and 25th as another potent system pushed through. This led to a windy day for Chicago with 45-55 mph gusts, which caused a few downed trees and power lines. Temperatures fluctuated between the 60s to lower 70s throughout the rest of the month with a severe storm on the 28th.  The severe weather mainly came in the form of 1” diameter hail and 60 – 70 mph gusts, that led to multiple downed trees and power lines.