May 2021: Somewhat Cooler and Drier in the Midwest

An overall quiet and relatively mundane month of May was experienced throughout a good chunk of the Midwest. Although the region experienced both warm spells and cool downs at various points, the month overall finished below average in terms of temperatures. While Chicago's temperatures were only slightly below average for the entirety of the month (0.4 degrees below normal), temperatures were overall cooler farther south and east, with locations across Indiana and Ohio 2-3 degrees below normal. In terms of precipitation, the month was below normal for most. Ohio saw rainfall close to or just below average, but areas around Indianapolis saw a deficit of 0.5-1.5" of rain. Meanwhile, the month of May in and around Chicago was rather dry, with rainfall 2-3" below normal values.

Chicago began the month on a warm note with highs in the mid - upper 80s on May 1st and 2nd. This was 10 - 20 degrees above normal, but unseasonable warmth did not last long as a cold front pushed through gusty showers and some storms on the 3rd. High temperatures returned to the 50s and 60s, while lows dropped into the 30s and 40s.

Drought conditions also began to unfold across the Midwest. Through the first 2 weeks of the month, Chicago had only accumulated about 0.36" of rain. Farther west, there was a bit more rain with Rockford picking up around 1.15", but some areas still had only 25% of their regular total by mid-month. Unfortunately, there wasn't much additional rainfall into the third week of the month as temperatures climbed into the upper 80s to 90. However, more substantial rain finally came on May 26th, bringing 0.74" of rain to Chicago. Temperature-wise, Chicago went from the low - mid 80s to the 40s and 50s in about 24 hours (about 10 - 20 degrees below average). Overall, Chicago finished with 1.79" of rain for the month, and the area is still trying to make it's way back to normal rainfall for the year. 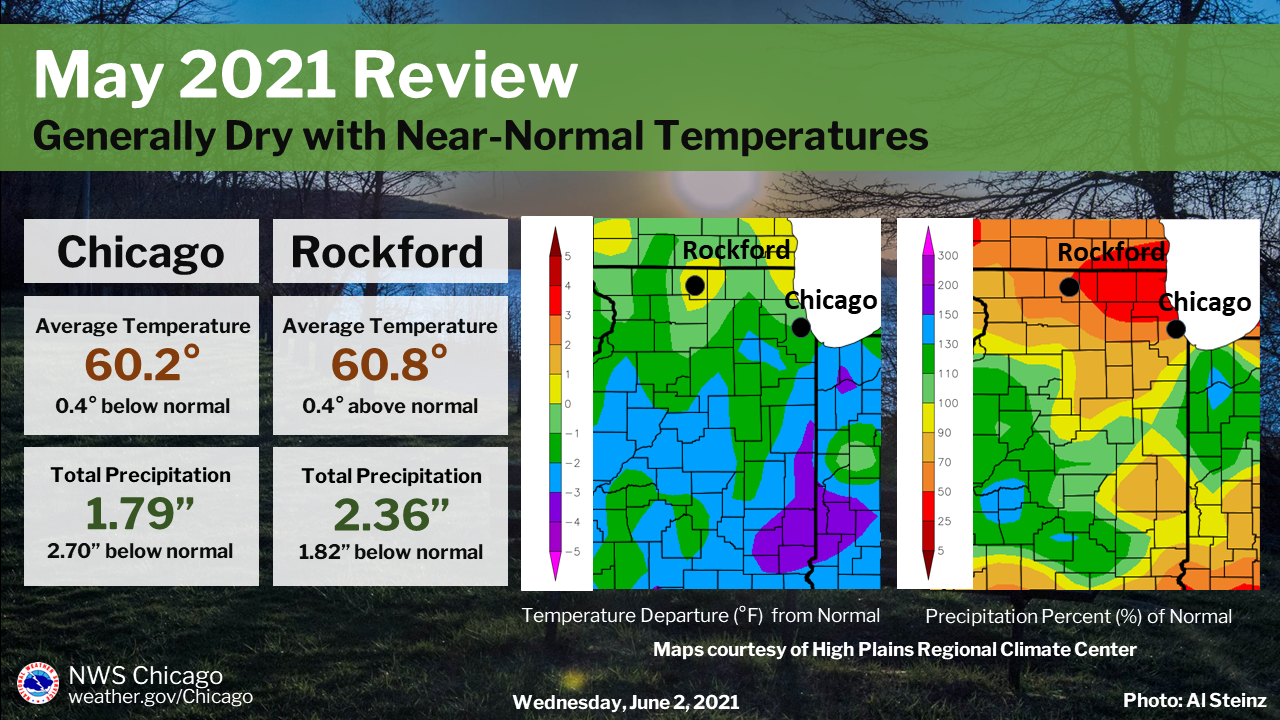 The month began like a roller coaster in Indianapolis with a high of 75 and a low of 38 on May 1st. The warm days continued on the 2nd, but periods of rain through the 3rd allowed for cooler temperatures. Temperatures from this point through the 13th were nearly 10 - 20 degrees below average (highs in the 50s and 60s). Along with this chilly air came some periods rain, with 1.49" from the 4th through the 9th. After this, it became dry for about a week before temperatures started warming up again, reaching the 70s on May 14th. This warmer weather continued through the 17th when a warm front brought widespread showers and thunderstorms and the most significant rainfall of the month, with 0.98". Following the frontal passage, warm and relatively dry weather ensued for the next several days. Highs were regularly in the low to mid 80s (5-15 degrees above normal) between May 20th and May 27th. An unsettled pattern then ended the month, as a cold front brought cooler daytime temperatures in the 60s and periods of rain that totaled up to 0.70". Although there were a couple of decent rain makers, monthly precipitation totaled 3.57", which was still below the normal of 4.75". Temperatures were also 2-3 degrees below average for the month.

Nice sky after that rain came through Greenwood @NWSIndianapolis pic.twitter.com/VAIqdIkQvT

The month of May initially began on the cool side, but warmed up for the 2nd and 3rd with highs climbing through the 70s to near 80. A cold front later on the 3rd and into the 4th brought periods of rain that totaled 0.50-1.50" of precipitation, with cooler weather for the next several days. From the 5th to the 15th, highs were regularly in the 50s and 60s, while lows were consistently in the 30s and 40s. It was no coincidence that these cool temperatures were coupled with one of the largest rain makers, with widespread rain and embedded storms on the 8th and 9th. Dayton, Ohio picked up a little over 1.21" of rain and Columbus recorded 1.43". Cincinnati picked up a bit less (0.65") as they were south of the heaviest swath of rain.

Dry weather then prevailed until the 17th when Cincinnati picked up 1.53" of rain from rounds of thunderstorms, breaking a record for daily rainfall. Dayton actually missed out on this event, but Columbus picked up a little over 0.50". Afterwards, it turned dry once again as temperatures soared into the 80s. These above normal temperatures continued through the 27th until they fell sharply once again, also bringing scattered showers to the region. The month closed out with rainfall close to average in Ohio. As for temperatures, most were 2-3 degrees below normal across the region.