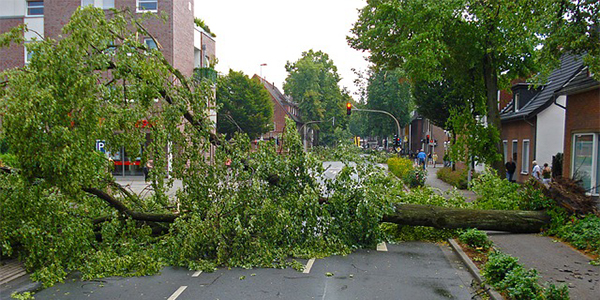 May 2019: Tornado Outbreak Caps Off an Active Month

May of 2019 will be remembered for a lot of rain and severe weather across the Midwest. The first half of the month was the quieter half, with the bulk of the severe weather and flooding occurring after mid-month.

Overall, temperatures were warm to the southeast and cool to the northwest. Chicago was the cool spot and the only place below average, at 1.1 degrees below normal for the month. Indianapolis was 1.5 degrees above normal, with Columbus coming in at 2.7 above, and Cincinnati and Dayton finishing at 3.2 and 3.9 degrees above average, respectively. It was generally a wet month, though with some exceptions due to the hit-and-miss nature of thunderstorms. Chicago came in with a whopping 8.25” of rainfall (more than double the average!), with Dayton also notably wetter than normal with 6.06” (+1.40”). Cincinnati was wetter than normal by less than 1 inch, while Columbus and Indianapolis were actually a little bit drier than normal.

The second half of May was very active, with NINE different days that featured severe weather near or in our forecast regions. Let’s sum up the three most remarkable days:

May 19th Across Indiana and Ohio:

A line of severe thunderstorms developed across Indiana during the early-evening and swept east into Ohio. Strong thunderstorm winds caused scattered tree damage in central Indiana into southwestern Ohio. Most notably, three EF-1 tornadoes touched down in the Dayton metro area, continuing their string of tornado activity that started in March of this year.

May 22nd from Oklahoma to Ohio:

What started as a tornado outbreak over Oklahoma and Missouri the afternoon of May 22nd grew into a powerful line of thunderstorms, bringing a large and long-lived swath of damaging winds known as a “Derecho” to Illinois, Indiana, and Ohio overnight into the early morning of May 23rd. This included a few tornadoes embedded in the line of storms over central Illinois and several measured wind gusts in excess of 75 MPH, most notably an 83 MPH gust in Iroquois, IL! Fortunately, the strongest winds stayed just south of Chicago and north of Cincinnati and Columbus, though Indianapolis was rocked by wind gusts ranging from 58 to 70 MPH and tree damage, while tree damage was also reported in the Dayton area.

May 27th from Iowa to Ohio:

Map of storm reports for May 27th courtesy of the Storm Prediction Center; each red dot is a tornado report, with many tornadoes from IL to OH.

The day started off with an afternoon round of severe thunderstorms affecting the south side of Chicago with large hail, damaging winds, and a few comparatively weaker tornadoes. Numerous reports of 1-1.5” (quarter to ping pong ball sized) hail came in from Kane to Will to southern Cook Counties in Illinois, with three tornadoes near or in the metro; an EF-0 near Plattville in Kendall County, an EF-0 near Romeoville in Will County, and an EF-0 near Sauk Village or just east of Chicago Heights in Cook County. EF-0 tornadoes are the weakest of tornadoes, with maximum wind gusts of up to 85 MPH. In total, the state of Illinois saw six tornadoes, with all of them being of the EF-0 variety. There were no injuries reported from these tornadoes in Illinois.

The storms gained intensity across northern and central Indiana, continuing to produce large hail and tornadoes. Thankfully, the worst of the weather missed Indianapolis just to the north, though an EF-2 tornado with winds of up to 130 MPH did touch down as close as Pendleton in Madison County. In total, Indiana saw ten confirmed tornadoes, including four “strong” tornadoes (two EF-2s and two EF-3s). There were three injuries reported across Indiana from these tornadoes, though thankfully zero fatalities.

Radar image showing a “debris ball” along I-75 just north of Dayton shortly after 11 PM on May 27th; this represents a strong tornado on the ground doing significant damage.

Ohio took the brunt of this tornado outbreak, as an extremely favorable combination of strong instability, intense wind shear (increase in wind speed and turning of wind with height), and a warm front were in place, particularly near Dayton. Storms were supposed to grow into a cluster of thunderstorms, but instead remained somewhat “discrete” or more solitary, allowing them to take full advantage of the favorable environment and produce damaging tornadoes.

In total, 22 tornadoes impacted Ohio in a span of just five hours. Of these tornadoes, eight were EF-0s (wind speeds of up to 85 MPH), seven were EF-1s (winds of 86-110 MPH), three were EF-2s (111-135 MPH), three were EF-3s (136-165 MPH), and one was an EF-4 with maximum winds of near 170 MPH. Unfortunately, one fatality occurred in Ohio near Celina from an EF-3 tornado, along with two other reported injuries in the state. Given the intensity of the outbreak and the fact that it occurred late at night, it’s fortunate that the casualty count wasn’t higher.

Image of a large tornado approaching the north side of Dayton.

The break didn't last long -- the Beavercreek EF3 developed almost immediately after the Trotwood-Dayton EF4 dissipated. In fact, there were /three/ tornadoes that came within two miles of hitting the @AFmuseum. pic.twitter.com/8pcvWS7V5k

Based on structural/tree damage at the Rivers Edge apartments (Riverside Drive), the Trotwood-Dayton tornado was rated EF4 (170 MPH) after careful analysis by a collection of NWS personnel. pic.twitter.com/VfxyWVMKg6

Image of the tree and apartment damage that prompted the EF-4 rating, courtesy of NWS Wilmington Meteorologist Andy Hatzos.

The Dayton area was extremely hard hit by these tornadoes; Darke County was hit by two tornadoes, Miami County saw four tornadoes including one EF-3, Montgomery County received three tornadoes, all being EF-2 to EF-4 in intensity, with Greene County also receiving hits from three tornadoes (one EF-1, one EF-2, and one EF-3). The area near Wright-Patterson Airforce base was a particular hotspot! Three strong to violent tornadoes tracked within 1.5 miles of the base and impacted some of the housing near the base.

This will go down as the second largest tornado outbreak in Ohio history by number of tornadoes. Other outbreaks have had more violent (EF 4-5) tornadoes, and other outbreaks have taken more lives, but only July 12th, 1992 had more individual tornadoes in the state at 29. This was the first violent (EF-4+) tornado in Ohio since June 5th, 2010, and the first time a tornado took a life in the state since four were killed by tornadoes on March 2, 2012. For perspective, the state of Ohio averages 18 tornadoes PER YEAR, and saw four more than that in about five hours.