October 2021: Mild and Wet in the Midwest

Chicagoland was graced with a late summer this year, as temperatures remained above normal through much of October. Even with the warmer temperatures, October stood out as the second rainiest month so far this year, and the twelfth rainiest October since 1871. This rain continued the trend of a wet second half to the year, with the first half of 2021 averaging well below normal for precipitation.

The first week of the month was warm and featured high temperatures in the mid-80s along with a few showers and storms moving through the area. While the Chicago area only received a soaking rainfall, a couple of tornadoes were reported just to the south on October 3rd. With periods of drytime throughout, this warm and wet pattern continued, then culminating with a burst of heavy showers and storms on the 6th and 7th.  While conditions quieted down for the next few days, another push of strong showers and storms returned to the area on October 11th resulting in excessive rainfall and isolated areas of flooding.

Following this early action, Chicago saw drytime on the 12th and 13th, with wetter and cooler condtions taking over on the 14th. For the next week, temperatures remained near the 60s, bringing much more seasonable weather to the area. Scattered showers and storms on the 20th were driven by a cold front that plunged temperatures regionwide. Afternoon highs only reached the mid 50s with overnight lows in the 30s during Chicago's first true blast of chilly, autumn air.

The remainder of the month trended drier and cooler with the exception of a strong storm system that swept through the area on the 24th and 25th. This system produced 2 - 4.5" of rain along with wind gusts of 40-50+ mph (outside of thunderstorms). To finish off the active month, a cold front pushed across the region on Halloween resulting in another surge of cold air for the start of November. 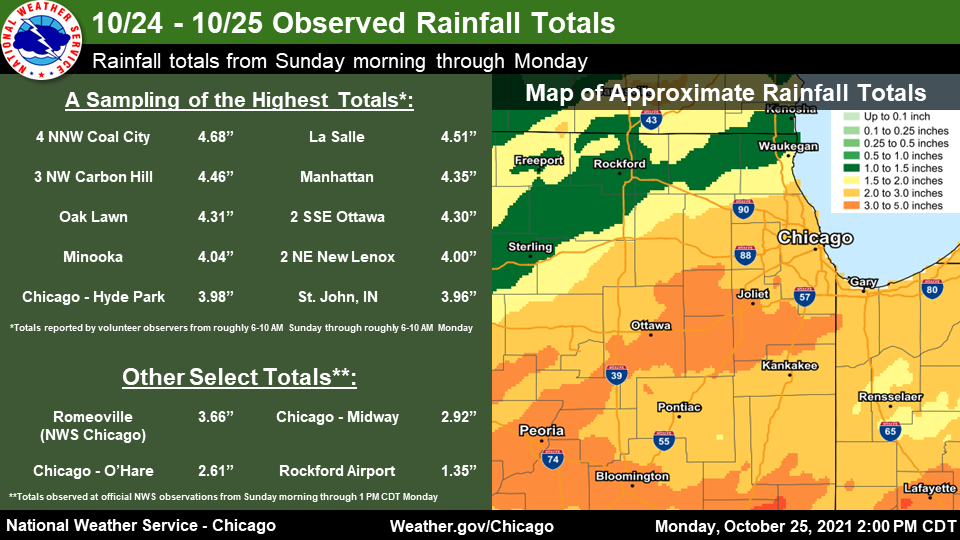 Like Chicago, October 2021 was warmer and wetter than normal for central Indiana.  The month started off dry and warm on the 1st with temperatures in the upper 70s to low 80s.  An upper level low then produced scattered to widespread showers and a few storms across the area on October 2nd and 3rd.  The pattern remained unsettled for the next several days as disturbances crossed the state.  Overall, the area received 1.5 - 3" of rain for the first week of the month.

Unseasonably warm, sunny weather returned for October 9th and 10th as temperatures climbed into the 80s. A line of strong to severe storms then moved across central and northern Indiana late on October 11th, but the worst of the weather stayed just northwest of Indianapolis.  Cooler and drier air then settled in for the next few days before showers and embedded storms impacted the area from the 13th through the 15th. This resulted in a widespread rainfall of 1 - 2".

Pleasant, sunny weather prevailed from the 16th to the 20th with afternoon highs in the 60s and 70s.  There were some showers around the evening of the 20th through early on the 21st with the next cold front.  This was followed by a rather dreary couple of days (Oct 22 - 23) with lots of clouds, areas of drizzle/showers, and temperatures stuck in the 50s. A day later, periods of moderate to heavy rain and embedded storms fell across the area during the morning and afternoon of the 24th.  Indianapolis received around 1 - 1.5" by evening. However, Mother Nature wasn't done as a line of strong storms moved through overnight producing locally gusty winds and another 0.5 - 1" of rain.

The rest of the month was seasonable and mainly dry with the exception of about a half inch of rain on the 28th and 29th as a storm system pushed across the state. Overall, Indianapolis was about 5 degrees warmer than normal and total rainfall was about 3" above normal for October 2021.

For the Ohio Valley, the first two weeks of the month weren't a wash out, but they did have their share of rain at times.  An upper level low produced widespread showers and a few downpours on October 3rd.  This resulted in about a half inch of rain for most of the the state with some localized higher amounts.  The greatest amount of rain during the first half of the month fell between October 6 - 8th as several disturbances crossed the region.  1.5 - 2" of rain fell in Dayton and Cincinnati during this stretch, but amounts were lower as you got towards central Ohio and Columbus.

A cold front then pushed across the state late Oct 15th into early Oct 16th. Just ahead of the front, a line of showers and storms trekked through Ohio and produced more widespread rainfall (totals 0.25 - 0.75" in Columbus and Dayton, 1 - 2" around Cincinnati).  This system also produced a few tornadoes, but they were confined to areas just east of Cincinnati and south of Columbus.  In fact, one of those tornadoes was rated EF-2.

A dry and pleasant pattern then set up through October 20th with afternoon highs in the 60s and 70s and overnight lows in the 40s.  Scattered showers and storms returned on the 21st as another cold front approached the Ohio Valley.  This was followed by a few dreary days as clouds and light showers lingered across much of the state and temperatures remained in the 50s.

The next few days were dry, but rain returned to the area on October 28th and 29th as another storm impacted much of the Midwest.  Rainfall amounts were 0.50 - 1.00" with this late October system.  Halloween weekend was mainly dry and seasonable before a strong cold front swept through as we turned the calendar to November.

For the month, Dayton, Cincinnati, and Columbus, OH were about 5 - 6 degrees above normal, while rainfall was about 1 - 2" above average.