Despite coming off a mild winter, the floodgates that kept the cold air at bay for much of the winter opened up for April, particularly during the second half of the month. It made it quite cool and wet as a result, along with more flakes than usual for areas north of the Mason-Dixon Line.

The first week actually trended warm, giving many a thought spring was here to stay. A retrograding low forced moisture back into the area for the first few days, especially across New England, but high pressure kept things calm after. Return flow on the backside of the high helped warm the Northeast into the 60s and 70s. Two frontal passages then knocked all of this back down a notch, especially on the 9th. This is when a strong system brought damaging winds across Maryland and Massachusetts. 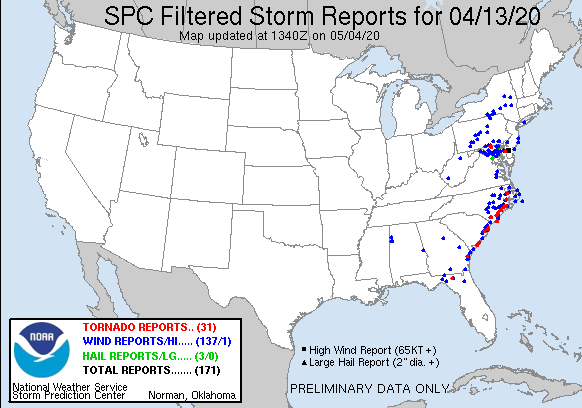 The rush of cold air behind it allowed for flurries and even localized coatings across interior New England on the 10th. And while high pressure briefly warmed the region back up by the end of the second week, another disturbance rocked the area with heavy rain and severe weather by the 13th. Two tornadoes (EF-1 and lower) touched down in Maryland as the warm front brought severe storms. A plume of moisture from the Gulf of Mexico also allowed a significant amount of rain to fall, up to 1.50 - 2.50 inches worth, for many…outside of New England.

This storm aided in flooding the Northeast with cold air through the remainder of the month. Several factors were the culprit of this, the most prominent being a breakdown of the polar vortex (which locked cold air over the Arctic) and blocking patterns in Alaska and Greenland (which were absent most of the winter). As a result, cold air was dislodged into the eastern half of the U.S., a pattern that would have gave us a much snowier time a month or two ago. This, combined with an active sub-tropical jet, contributed to the extra number of storms.

So, the second half of April was downright cool, rainy, and even snowy for many places. While this cold air was modified (in contrast to what it would be in February), temperatures were still up to 10 or 15 degrees below normal. The Northeast had many days with high temperatures stuck in the 40s and 50s (even in Maryland), and consequently, lows were falling into the 30s and 40s.

Modest rain events would mark this period, though the 17th and 18th actually saw snow beyond the usual climatological spots. Several inches fell in the hills, but areas like the Wyoming Valley in PA saw at least a few tenths of an inch. And locations surrounding Hartford, CT received just over 2 inches of snow, while the hills of central Massachusetts piled up over 4 inches. Despite the cool pattern continuing, that would be the last substantial snowfall in the region. A heavy rain event late on the 30th would mark the end of the month, causing over 1 inch of rain for many and creating a few areas of flooding.

On average, April ended up roughly 2 to 3 degrees below normal, though cities like Baltimore and Washington, D.C. were only about 1 degree colder. Boston did have one of its top 10 coldest Aprils on record, but thanks to the initial warmth to start the month, no other records fell. With that said, cities like Newark, NJ and Wilmington, DE saw record cold on the 19th with lows of 33 and 31 degrees, respectively. The excessive amount of storms also brought higher than normal precipitation, even double the norm in places like Maryland.