October 2019: A Month of Extremes in the Midwest

From record heat to record cold (and even some snow in Chicago) October 2019 was a month of extremes in the Midwest. This was due to a troughing pattern that mainly set up during the beginning and end of the month. This allowed multiple fronts to push through the region which led to above average rainfall across the Midwest, especially in Chicago, where 6.76” of precipitation was recorded (over double the average of 3.15”). This was the 8th wettest October on record since 1871! In terms of temperature, the Midwest ended around 1-5 degrees above normal, except for the Windy city where it was 2 degrees below normal. In fact, there was even accumulating snow in October, with daily records broken at O’Hare airport in Chicago on the 30th and 31st, with 1.2” and 3.4” of snow, respectively. As a whole, it ended being the 2nd snowiest October on record for Chicagoland with 4.6” of snow (the snowiest was 6.3” in 1989). 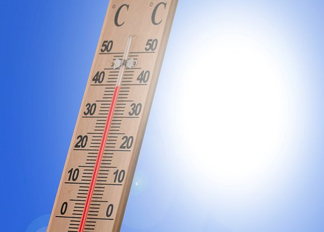 The Midwest started off the month with scorching heat, especially for areas east of Indianapolis, as temperatures soared into the lower to middle 90s on the 1st - 3rd. Daily records were shattered on the 1st in Columbus, Cincinnati, Dayton, and Indianapolis. Columbus hit a high of 94 degrees, which broke the previous high by 6 degrees, which was set back in 1952! This heat and humidity set the stage for a round of heavy rain on the 2nd and 3rd in Chicago, which led to widespread flash flooding due to rainfall amounts between 1.75-2.50”. More seasonable temperatures returned across the Midwest on the 4th and continued through the 8th with only minor bouts of showers.

During the second week of the month, a brief warm up occurred on the 9th and 10th with highs in the upper 70s to lower 80s (5 – 10 degrees above normal). Thereafter, a cold front swept through the area on the 11th, which produced around 0.50” of rain from Chicago to Columbus. The bigger story was the drastic temperature swing behind on front on the 12th. Highs only rose into the lower to middle 50s, while the overnight lows plummeted to 34-35 degrees.

Typical fall conditions continued across the Midwest through the 18th, with mainly dry weather except for around 0.25” – 0.50” of rain in Ohio on the 16th. After this mid-month cool stretch, temperatures rebounded nicely on the 19th and continued through the 21st with highs in the 60s to lower 70s. These mild conditions were followed by a cold front that pushed across the Midwest, with rainfall totals mainly less than .25” on the 21st. That being said, this front stalled and enhanced over the Indy area, which led to an inch of rainfall. In the wake of this cold front, seasonable weather returned, then another round of soaking rainfall (1-3”) moved through the Midwest on the 26th, which created some flooding in Chicago.

The weather quickly flipped winter-like, with cold and snowy conditions to end the month for Chicago. During the early morning hours of the 29th, rain flipped to a brief burst of moderate snow west of the Chicago Metro area. Temperatures dropped into the middle 30s which lead to a few tenths of accumulation on colder and grassy surfaces. These cold and snowy conditions continued on the morning of the 30th where a band of moderate to briefly heavy snow fell over the entire Chicago area with locations in and around Aurora and Naperville observing snow accumulations over 3” in spots.

However, the Windy City wasn’t done yet! Another round of substantial snow pushed through from the evening of the 30th into Halloween and proved to be the heaviest snowfall of the period. In fact, 2 – 4” fell in and around the Metro area with over 6” reported in portions of McHenry county. As this system intensified and moved east, snow showers even fell across Indianapolis, Dayton, and Cincinnati which led to widely scattered coatings to around 0.2” of snowfall as we turned the calendar to November.