October 2020: Cool and Wet in the Midwest & First Flakes of the Season

The month of November was on the cool and wet side of normal for most of the Midwest with Chicago, Indianapolis, and Columbus coming in between 0.5 – 1.0°F below normal. On the other hand, southern areas like Dayton and Cincinnati were 0.5 – 1.0°F above average. The differences stop there, however, as all areas observed above average rainfall. In fact, Indianapolis recorded 5.35” for the month. During the month of October, severe weather usually trends downward while the risk for snow increases. That was the case in October 2020 with only one day of severe weather and three instances of snow in and around Chicagoland. 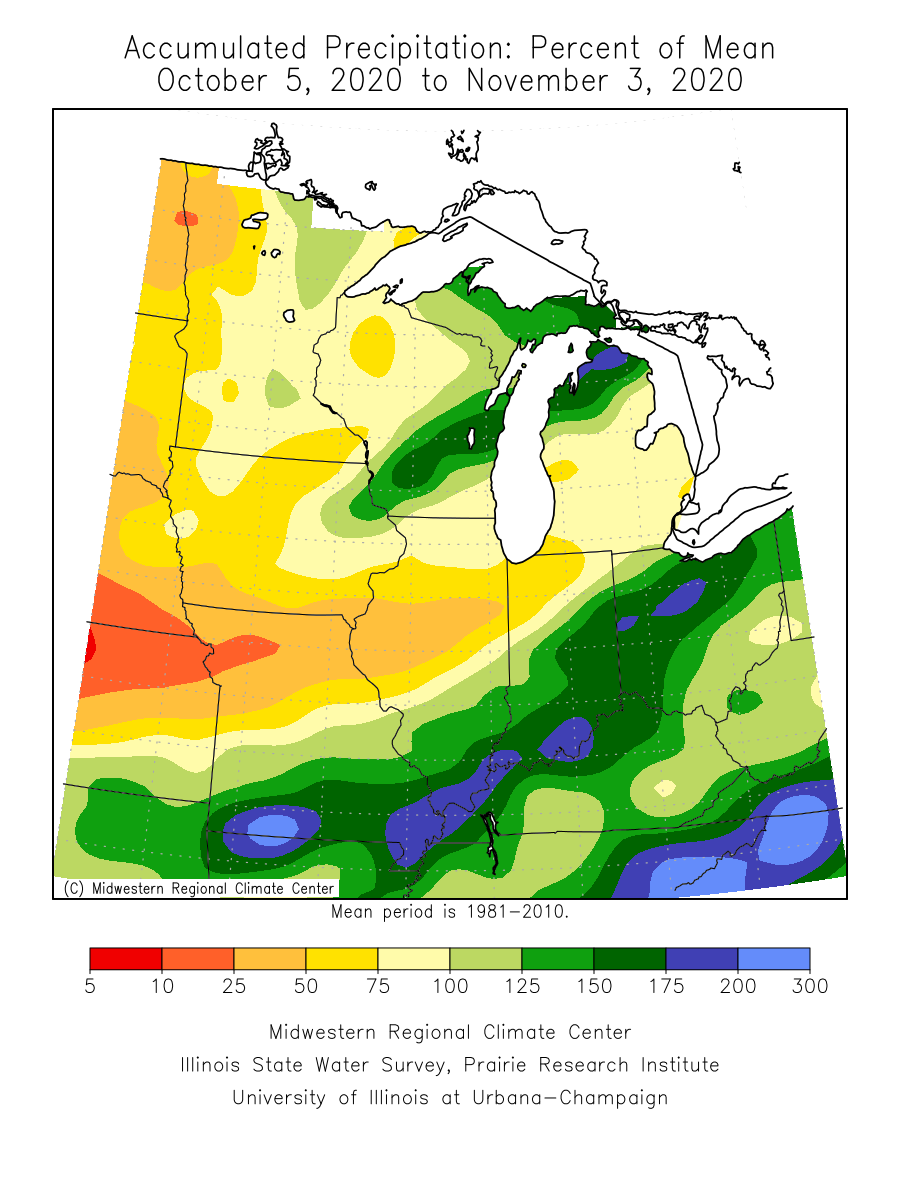 The month started on a cool note with temperatures mainly in the upper 50s to 60s between the 1st and 6th across the Midwest, which is up to 10 degrees below normal for this time of year. The cool stretch had bouts of dry weather with a few days of light showers that only added up to a few tenths of an inch of rain. At night, temperatures fell in the 30s in Chicago, which led to some areas of frost. The cooler temperatures briefly stopped when high pressure ushered in warm, dry and windy conditions on the 7th as temperatures soared back into the 70s and 80s. These mainly dry and windy conditions persisted through the 15th before the pattern switched back to being cooler and wetter. Temperatures fell back into the 50s during the day before a cold front brought periods of heavy rain between the 18th – 20th. This front produced a widespread 0.5 – 2.0” of rain which led to a few areas of poor drainage and roadway flooding. It was marginally cold enough in northwestern McHenry county outside of Chicago on the 19th to a have a brief period of a rain/snow mix. Due to the marginal temperatures in place, it only led to a widely scattered coating on colder and grassy surfaces.

Then, temperatures warmed back up into the 70s to lower 80s on the 21st – 23rd. The warm weather was accompanied by more rain, which led to another soaking rainfall of 0.5 – 2.0” across the Midwest with the highest falling in Chicago.  The disturbance that produced the rain also produced the only bout of severe weather of the month on the 23rd. This was focused in Indianapolis, Dayton and Cincinnati with a few damaging winds gusts up to 65 mph and a few instances of quarter sized hail. After this bout of severe weather, it turned cold through the end of the month with multiple disturbances. The strongest was on the 29th (remnants of Hurricane Zeta) which dropped up to 2” of rain in Cincinnati. The main takeaway wasn’t the remnants of the hurricane but two rounds of snow showers on the 26th and 27th in Chicago. This led to scattered coating – 0.5” amounts particularly north and west of the Chicago Metro area. Overall, the month of October was cool and wet with the first snowfall occurring through some places of Chicagoland.