The tornado outbreak of December 10–11, 2021 was without a doubt one of the most violent and damaging tornado outbreaks in recent memory for the United States. So, what caused such a prolific event? A volatile atmospheric setup was in place over the South and it was primed for tornado development. This included an unseasonably warm and record-setting airmass with temps 20-30 degrees above normal and was more akin to spring than it was to December. This unusually warm airmass, combined with deep tropical moisture from the Gulf of Mexico, provided enough energy to fuel these storms. Additionally, wind fields at various levels of the atmosphere strengthened throughout the day and provided the "spin" necessary to produce numerous rotating supercells. Lastly, with all the ingredients laid out, an approaching cold front blasting through the region provided the trigger to ignite the first round of storms around sunset.

Incredible and disturbing video of the likely 1mi+ wide monster wedge that had crossed Mayfield and entered Sacramento,KY with 250mph+ of GTG shear an absolute inescapable beast.

The small and unassuming area of storms that would go on to produce the devestating Quad-State Tornado began over central Arkansas at around 4 PM CST on Friday. This cell would gradually strengthen as it quickly headed to the north and east into an increasingly favorable environment for tornadogenesis at around 5:30 PM CST. By 5:51 PM CST, the National Weather Service issued the first tornado warning for this cell as it continued to exhibit signs of increased rotation. Finally at 6:55 PM, trained weather spotters reported a large tornado near Greenfield, AR, prompting the first "Particularly Dangerous" tornado warning for this storm. From there, the parent supercell would go on to travel over 230 miles and impact four states over the course of four hours. During the lifetime of the supercell, there were at least eight tornado emergencies issued, which are typically reserved for the most serious and life-threatening tornado events when a confirmed large and extremely dangerous tornado is threatening life and property.

Radar collage of the supercell that went on to produce the "Quad-State" tornado Source: NWS

The National Weather Service is now in the process of performing surveys on the tornado to not only determine the strength of the storm, but also whether or not the track of the tornado was indeed continuous or if it was a "family" of strong/violent tornadoes that came from the same supercell. If the tornado is confirmed to be a single tornado, it would be the longest "long-track" tornado in US history. The current record-holder is the "Tri-State" tornado of 1925, which tracked over 219 miles across Missouri, Illinois, and Indiana. While the National Weather Service will determine the exact strength of this tornado in the coming days after conducting numerous and thorough storm surveys, there are already plenty of damage indicators that show this was indeed a strong to violent tornado that would fall into the EF-3, EF-4, or even EF-5 classes on the Enhanced Fujita Scale. One of the most impressive indicators was observed on radar when one of the radar scans out of Paducah, KY suggested that the tornado lofted debris over 30,000 feet into the air when it was moving away from Mayfield, KY. For context, this is the same altitude at which commercial airplanes fly. Mayfield was especially hard hit with home and businesses ripped down to concrete slabs. Two warehouses were also destroyed, trapping and killing employees.

Drone footage from Mayfield, KY from WXChasing on YouTube. 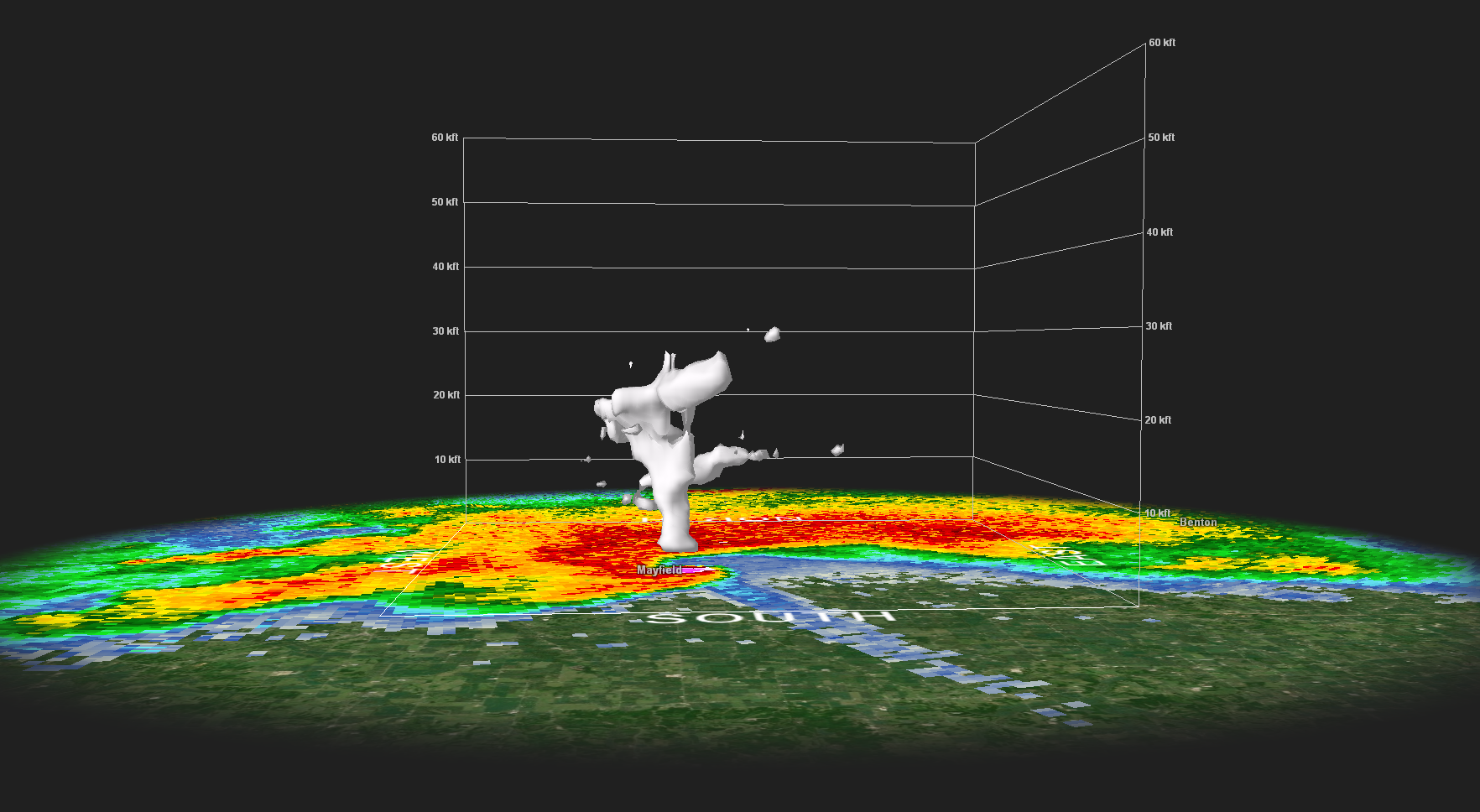 3-D Radar imagery showing derbis from the tornado being lifted 30,000 feet in the air after hitting Mayfield. GR2 Analyst.

The violent nature of the outbreak was particularly rare for this time of year, and in fact, there have only been 19 EF-4 tornadoes in the month of December since 1950 and just 2 EF-5 tornadoes. Going further, the last EF-4 tornado to hit during the month of December was during the Christmas Outbreak of 2015, and the last EF-5 was in 1957! An EF-5 tornado is the strongest designation that a tornado can receive and is exceedingly rare. These tornadoes produce wind speeds in excess of 200 mph and can cause catastrophic damage to all man-made structures. The United States has been thankfully free of these monsters since the last EF-5 hit Moore, Oklahoma in May of 2013 (over 3,120 days ago), which is the longest streak on record.

Kentucky Governor Andy Beshear described the tornado as the most devastating one to hit the state, estimating that it might have killed at least 88 people, but possibly more than 100. That would make the event not only the deadliest tornado event in Kentucky history, but potentially even the deadliest December outbreak in US history.