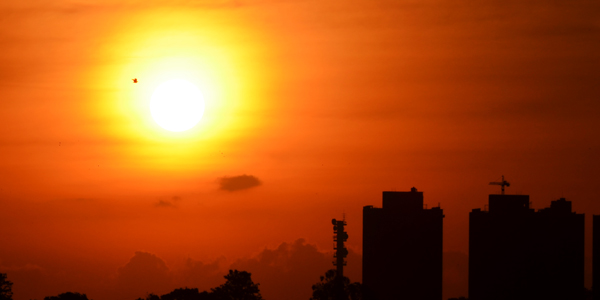 We are now well into July and many places in the Northeast are at their peak of summertime heat. Why is it that maximum temperatures are not in June, when the longest day of the year is typically on June 20th or 21st (the summer solstice)? As it turns out, the oceans and lakes we all like to visit for our long awaited summer vacations hold much of the answer to that question. 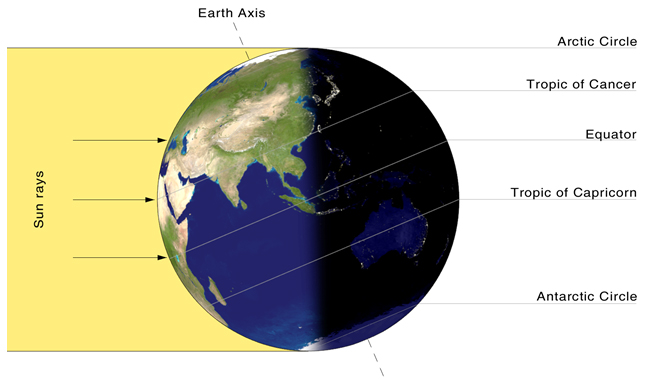 The northern hemisphere summer solstice on Earth. Notice how the sun’s most direct rays are at the Tropic of Cancer, at 23.5° north latitude. Most locations do not see their warmest temperatures until July in the Northern Hemisphere. (Photo Courtesy of Wikipedia/NOAA)

On the summer solstice, the sun’s rays are the most direct at the Tropic of Cancer (the sun appears directly above you, those at the Equator actually see a lower sun angle on this day). In addition, the amount of incoming solar energy, or radiation, is the highest. However, bodies of water and the ground, have a certain heat capacity, which is the amount of energy it takes to change the temperature of an object by a given amount. In fact, water takes much longer to heat up than land. Since our Earth is around 71 percent water our temperatures on land are highly dependent on the temperatures of the bodies of water near it.

In July, terrestrial radiation (outgoing radiation from Earth), is still reaching its peak based on the large heat capacity of the oceans and to a lesser extent land masses. This added terrestrial radiation allows air temperature to continue to rise even though energy from the sun is decreasing. On a daily scale, much of the same process explains why the highest temperatures typically occur at 3 PM rather than solar noon. Taking a look at NYC below, the seasonal lag is clearly shown in the average highs and lows.