(Our temperature and precipitation forecasts for meteorological summer of 2020, the June-August period)

A generally warm summer is expected across the United States.  The summer is expected to trend warmer as it goes on, especially in the central and eastern United States.  While we expect more seasonable conditions in the Midwest, they will likely have a similar warming trend through the summer (in other words, not that hot early, but hotter late).

Precipitation is forecast to be below normal in the west (with possibly the exception of the desert Southwest) and likely above normal as you travel east.  Any tropical influence can enhance rain from the Gulf Coast and Southeast into the Great Lakes and Mid-Atlantic, especially in July and August.

Our forecast number of named storms, hurricanes, and major hurricanes through the season

A generally active hurricane season is expected, with a few early storms (we’ve already seen Arthur) in May, June and July.  As we move towards the peak of the season in August and September, the focus will shift towards long-tracked, potentially intense hurricanes across the Atlantic.  Some of these storms will spiral out to sea, but at least a couple may move farther west into the Caribbean, Gulf of Mexico, or towards the Southeast U.S. coast.  Activity will gradually tail off in October and November, but some late season storms can be expected this year.

As the largest ocean in the world, the vast heat store that is the water in the Pacific can tell us about the upcoming season’s weather pattern.  In particular, water temperatures close to the equator can drive large clusters of thunderstorms that modulate the jet stream and hence, the weather pattern downstream over the United States and Atlantic Ocean. 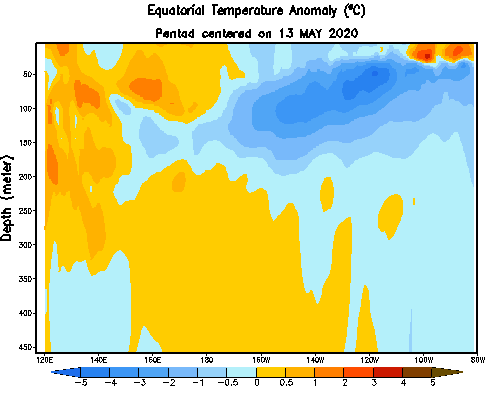 Sub-surface temperature anomalies across the equatorial Pacific, centered on May 13th. Courtesy CPC

While the surface temperatures reflect “neutral” conditions right now, they’ve cooled recently, and the sub-surface waters indicate an impressive cool pool beneath the central and eastern Pacific.  Strong trade winds can encourage these waters to “upwell” and lead to further cooling at the surface.  This chain of events would result in a La Nina developing this summer.

Our model guidance shows this move towards a La Nina over the summer, though in general don’t develop a full-blown La Nina.  The recent cooling at the surface and below the surface suggest a more aggressive La Nina development is possible over the next few months, which will be an important trend to watch.

La Ninas tend to favor hotter summers across the United States, along with more active Atlantic hurricane seasons. If a La Nina develops, the big question will be how quickly the atmosphere responds to it.  This will be one of the more important variables to monitor as we progress through the summer. 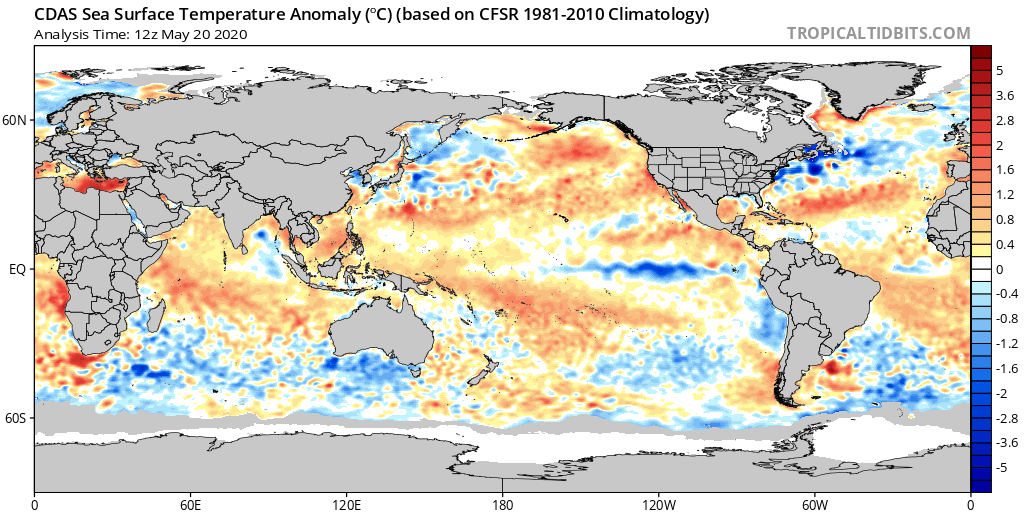 On top of developments across the tropical Pacific, the warm waters across the northern Pacific may help encourage warm weather over the western U.S. this summer.  The Gulf of Mexico and sub-tropical Atlantic are warm, which may favor increased humidity over the southern and eastern U.S. this summer.  The Atlantic Ocean is a bit of a mixed bag for favorability to hurricanes, despite the overall warmth.  However, modest warming in the tropics would more strongly favor an active hurricane season.  The Indian Ocean is warm, particularly farther west; this support warmth across the U.S. this summer, along with strong tropical waves that move across Africa and can seed Atlantic Ocean hurricane development.

Overall, the oceans suggest a warm summer across the country and an active Atlantic hurricane season, though we’ll be keeping a close eye on La Nina development and water temperatures in the tropical Atlantic over the coming months, along with several other factors.