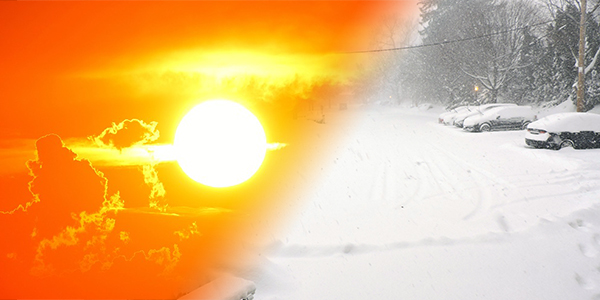 We’re well into the summer season, and we’re seeing some of the year’s warmest temperatures in our region. In fact, some of the hottest temperatures ever recorded have occurred in July and early August across the mid-Atlantic and Northeast, as the chart below shows:

Notice how these record high temperatures are well after the first day of summer (the summer solstice). What about the coldest temperatures ever recorded in these states? Do they follow the same delayed pattern? The following chart shows the record lows, as well as the date of occurrence of these readings. Since the winter solstice occurs in late December, these cold season extremes are also "lagging" the start of the season. 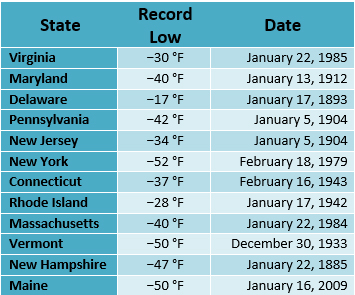 But why do the hottest and coldest temperatures occur after the solstices when we see the most or least sunlight of the year? This delay is caused by two factors, one is the more obvious change in seasons and the other is a lesser known phenomenon called seasonal lag.

The main reason for seasonal lag is that the majority of Earth is covered in water (about 71%), which has a much higher heat capacity than land. "So what is heat capacity?" Basically, it is the amount of heat that must be added to or removed from something to change its temperature. Because water has a relatively high heat capacity, it requires much more heat and takes longer time than land to warm up. Conversely, water takes a longer time to cool down than land. So even though the greatest amount of solar energy occurs on the summer solstice, the substantial water bodies on the earth slow the heating process, which delays the hottest tempeatures about a month or so. This same concept applies to the winter solstice, where it takes longer for the temperature of the water to cool down, so the coldest temperatures of the year are typically delayed to January. This is why our hottest and coldest temperature extemes mainly occur in July and January, respectively.