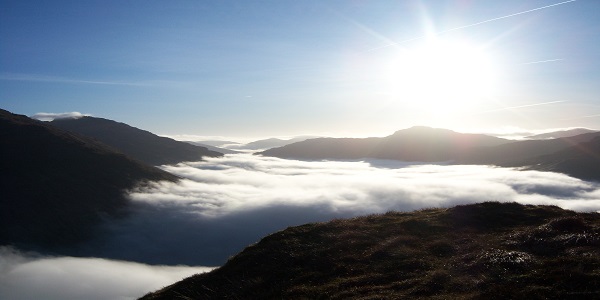 If you happen to have a thermometer in your car (which most modern cars do), have you ever noticed that on a given winter morning when skies are clear, it reads warmer on hills? Then, when you descend into the valleys or are in a very open area that lacks development (such as the Pine Barrens), it is much colder? This kind of early morning can see 20-degree temperature swings across a relatively small region. But… why??

The answer is that you have stumbled upon what is called a temperature inversion. Now, what the heck is that? Let’s dig a little deeper.

When we receive daylight from the Sun, the ground warms the quickest. Thus, the air right near it will warm up most effectively. The air further up in the atmosphere does not warm up as effectively, which results in temperatures decreasing as you ascend from the surface.  This happens (as an example) during the day when valleys are warmer than their surrounding hills.

However, a temperature inversion is pretty much what it sounds like. It is the opposite of the above description with temperatures actually increasing with height, rather than decreasing. Instead of the surface warming the fastest, it cools the fastest as heat escapes. This is “radiational cooling”, and occurs most ideally on clear, calm nights. It tends to keep higher elevations relatively warmer while the valleys become much colder.

Additionally, cool air on the hills will fall into the neighboring valleys because it is more dense than the surrounding warm air. This, combined with radiational cooling, causes significant differences in temperatures when it comes to elevation. Below is a picture of this happening on a clear night with just the right conditions. 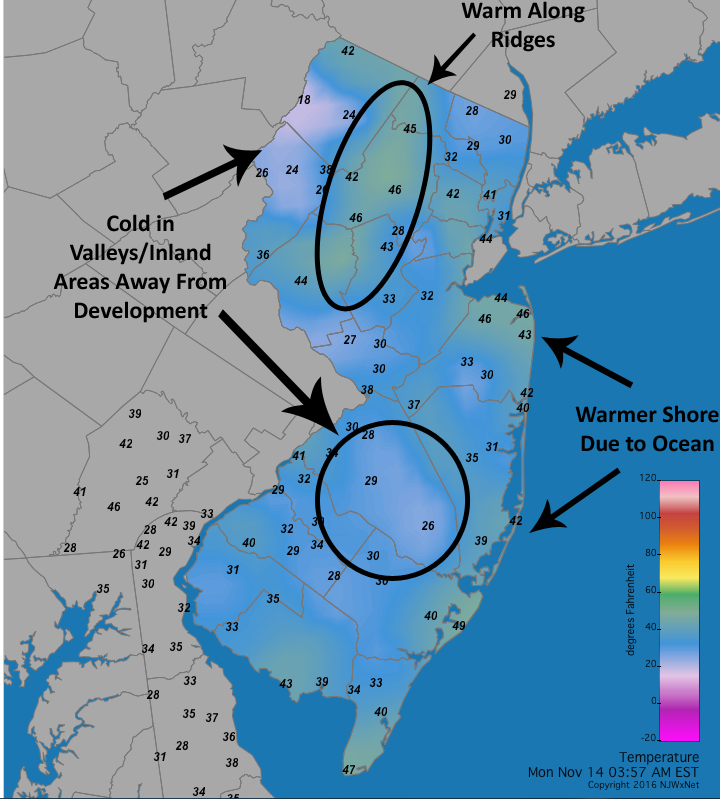 Temperatures at in New Jersey at 4AM on November 14, 2016 (courtesy of NJWxNet)

In this rather intense case of cooling on November 14, 2016, temperatures varied significantly depending on where one happened to be. The hills in northern NJ stayed in the 40s while the valleys dipped well into the 20s. And while all the lower elevations will cool off too, it is best shown in the Pine Barrens where temperatures there also fell into the 20s.

Temperature inversions can also lead to other effects. One such situation is when a layer of warm air well above the surface traps a layer of cooler air beneath it. These scenarios tend to occur, ironically, on nice sunny days with high pressure and lead to smoggy conditions since pollution cannot escape or “mix out” effectively like it normally can when there is not an inversion in place. Cities like Los Angeles are most commonly impacted by this, where thick brown layers of smog along the horizon can be seen.

A layer of brown smog sits near the surface on a clear afternoon in Los Angeles, CA (courtesy of Lan56 - Wikimedia Commons)


Inversions are also responsible for freezing rain during the cool season. As cold air at the surface is kept near or below freezing, warmer air is seen higher in the atmosphere at a higher elevation. As rain falls through relatively warmer layers as a liquid, it ends up freezing on contact when hitting the surface within the shallow yet cold layers.

So, those are the basics of what a temperature inversion is. Next time you are driving on a clear night around daybreak, check out how the temperature fluctuates on your daily commute!