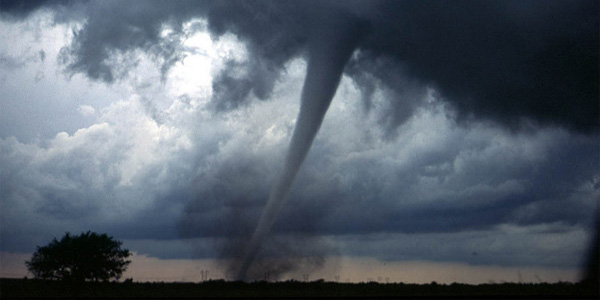 Tornadoes are one of the most violent natural phenomena that mother nature has to offer. While they are quite rare on the East Coast (and typically weak if they do occur), they are much more common over the central part of the country and can produce winds in excess of 200 mph, destroying virtually everything in its path. Tornadoes are responsible for around 50 deaths per year in the US, although extreme outbreaks have unfortunately led to over 500 deaths in a calander year. While technology and research has vastly improved over the years, tornadoes are still very tough to forecast, and lead time via warnings are often only 10 - 30 minutes in advance. That lead time; however, can be the difference between life and death. While there is still plenty of room for improvement, we have come a long way since the first tornado was detected on radar, 65 years ago (below)..

It was April 9, 1953 in Illinois when the first hook echo signature of a tornado was detected on radar. While that may not seem significant to you today (radar on your smartphone can now detect that), back then it was a surreal event. That was the first recognized use of radar to identify a tornado, and up until that point, radar was only used to study rainfall and thunderstorms. This opened the idea that radar could be useful in tracking tornadoes, and as we all know 65 years later, is crucial. The above image has side by side pictures of what the first hook echo looked like on radar, compared to one just a few years ago. We certainly have come a long way!