During the winter, there are four main precipitation types that meteorologists forecast. They are rain, freezing rain, sleet, and of course snow. Generally, the precipitation type that reaches the ground is dependent on how "deep" the freezing layer is above.  In other words, how high in the atmosphere do you have to go to get below 32 degrees.  If the entire layer of the atmosphere is above 32°F, you get rain.  If it is entirely below freezing (usually all the way to the ground), you will see snow.  However, an intruding warm layer in between is where we need to deal with the other two precipitation types. If the warm layer is shallow, the snow will melt on its way down to the surface, but as the "newly melted" now raindrops fall into a layer of cold air closer to the surface, they refreeze into ice pellets commonly known as sleet. These little balls of ice tend to bounce off many surfaces (like your car windshield) making a distinct “pinging” sound. A thicker warm layer, however, will cause these newly melted raindrops to remain unfrozen and will not have time to refreeze into sleet before reaching the ground. The biggest concern then becomes the temperature of the surface.  If it is at or below 32 degrees, the raindrop will freeze on contact and create a layer of ice.  This is known as freezing rain and can result in icing on roads, trees, buildings, electrical lines, and cars.  Freezing rain is one of the most hazardous types of precipitation during the winter months.  Below is a diagram of how this whole process works. 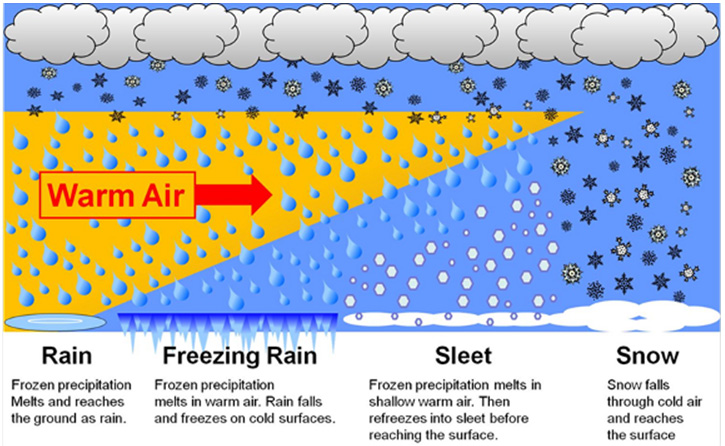