Weather and the Air We Breathe

Before we walk outside, most of us tend to be fairly cognizant of whether we need to bring a jacket to work or if we can get away with shorts for just one more day, but what we usually fail to acknowledge is the type of air quality that we may encounter just beyond our doorstep. Most of us don’t realize that a hot summer day may not only require some extra fluids and a few breaks from the scorching heat, but we may also need to take the time to remove ourselves from the outside environment. Whether you work in a big city or live in a rural area, both the local and regional air quality may have a bigger impact on you than you may think..

Have you ever seen an Air Quality Alert on the National Weather Service’s (NWS) website? Well if you haven’t, it wouldn’t hurt to take some extra time to research your local air quality before you head outside each day. Every state has their own daily forecast for their major metropolitan areas, which can be accessed through AirNow.gov. While most days generally fluctuate from Good (Code Green) to Moderate (Code Yellow) air quality, there are several days throughout the year where we see Unhealthy for Sensitive Groups [USG] (Code Orange) or just straight up Unhealthy (Code Red) air quality, which would require the NWS to put an Air Quality Alert. 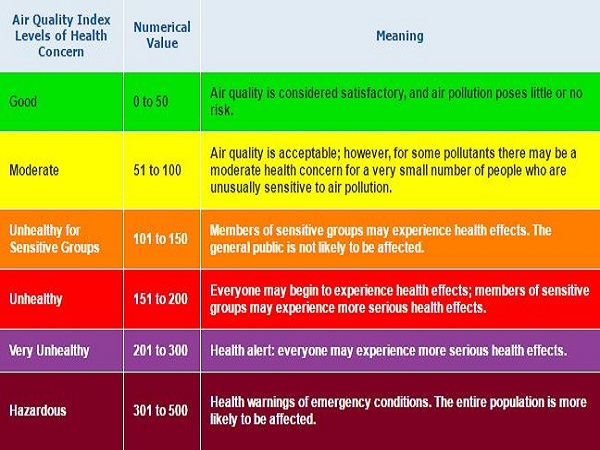 It’s typically during the summer months that we will see most of the alerts for ozone and fine particles (PM2.5) due to the increased moisture and hotter, sunny days. While an air mass may start out clean, modification will occur due to recirculation of local air along with the assistance of mid to upper-level transport from metropolitan and industrial areas. For example, an air mass passing through the Midwest will begin to develop unhealthy characteristics from industrial cities like Gary, IN, large metro areas like St. Louis and Chicago, and from ship yards along the Great Lakes. As it pushes eastward, further modification will occur across the Mid-Atlantic with the highest pollutant concentrations favoring areas along Interstate 95. High pressure can then cause a great deal of stagnation along with limited vertical mixing, allowing for a build up of even higher concentrations of pollutants at the surface. While just beyond that, heavy rain from a strong cold frontal passage can cleanse the air as it washes out the particles in the atmosphere.

Typically when we see a USG (Code Orange) forecast, the youth, elderly and people with asthma or heart and lung disease are encouraged to avoid long periods of outdoor exposure as they are more susceptible to having respiratory problems. Fine particles (PM2.5) such as nitrogen oxides (NOx) and sulfur oxides (SOx) can also pose a danger in high concentrations due to their microscopic size and ease to penetrate your body’s mucus membrane and enter directly into your bloodstream. Concentrations in the Unhealthy (Code Red) range or higher can even begin to affect the healthiest of people during prolonged exposure.

Air pollution in the Northeast US tends to be highest along the I-95 Corridor on a light SW wind and around major cities in the Midwest.

What produces these ‘toxins’ you may ask? While there are several biogenic sources of NOx and SOx such as agriculture activity, volcanoes and even forest fires, anthropogenic (human-created) sources like the combustion of fossil fuels make up an even larger chunk of the pie. Ozone on the other hand occurs naturally in the stratosphere due to chemical reactions involving solar ultraviolet radiation and oxygen molecules; however, here in the troposphere (where we live), NOx, carbon monoxide (CO) and volatile organic compounds (VOCs) are precursors to ground-level ozone, which helps creates ozone with the reaction of sunlight.

So now that you know a thing or two about air quality, it wouldn’t hurt to incorporate it on your daily weather check by visiting AirNow.gov and clicking on your state’s forecast. While you shouldn’t have to worry about wearing a respirator outside, it pays to know what’s in the air you breathe and why certain days are more of a struggle than others.