What's the Deal with the Weekend Storm?

Well, December is here and it didn't take long for a coastal storm with wintry potential to enter the picture. But before we get to Saturday's storm, let's talk about Friday. A narrow front will move into the region, bringing the risk for showers. It will largely just be rain, though some hilly spots (i.e. around the Poconos) can see a little snow mix in. The rough positioning of where this front will be can be seen below, extending from southwestern PA into southern New England. This front will help supply some marginally cold air for the weekend storm. 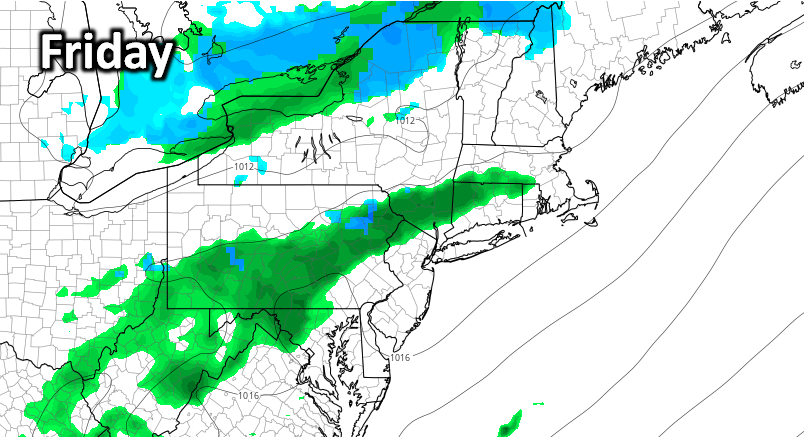 Looking ahead to the Friday Night into Saturday Night period, we'll be dealing with a strong coastal storm developing rapidly just off the Mid-Atlantic and Northeast coastlines. Unfortunately, there is considerable uncertainty with this storm. While confidence is high that it will form, the rain vs snow impacts are still a question mark with marginal temps around 32 degrees. Unlike most coastal storms where the track is the biggest factor, here we are more concerned with "phasing", or the joining of the southern stream (moisture) with the northern stream (cold air). The image below illustrates that. We're looking at roughly 20,000 ft in the sky at vorticity, which helps us see turning and energy in the atmosphere. Note the southern stream (bowling ball type feature circled in green) and the northern stream approaching (circled in blue). While there is a subtle difference between the NAM and Canadian high-res (RGEM) models, notice how the NAM wraps the two pieces of energy together (phases), while the Canadian sort of just pushes the two along separate. They don't phase until much later. 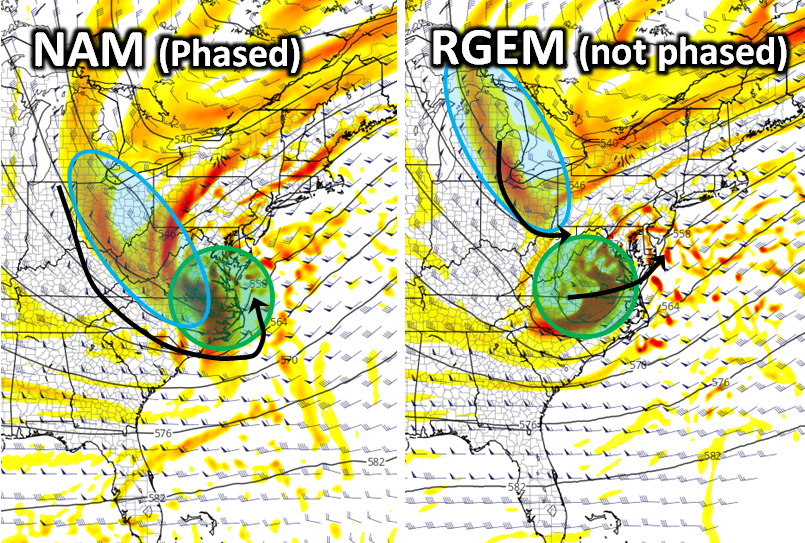 The result of an early phase vs a late phase is important. In this case, the sooner it is, the stronger the low pressure becomes, along with bringing in colder air quicker. That means a larger snow storm, particularly for Northern / Interior New England, but snow could also occur closer to the coast, with even places into the Hudson Valley to northwest NJ potentially seeing accumulating snow. Heck, even a little mixing could occur at the end closer to NYC and Philly based on the early phase/stronger storm solution. However, on the other side of things, a later phase would largely mean rain for all these areas, and it would mainly be a Northern / Interior New England threat, with perhaps some brief mixing further south... Currently, we are favoring the later solution, which will dissappoint snow lovers in the Hudson Valley and northern New Jersey. However, for those from northeast CT into Massachusetts, and New Hamphire, the potential for accumulating snow is real and those plows may need to be dusted off!