Oppressive heat and humidity will persist for the remainder of our Friday a mix of sun and clouds. Temperatures will peak in the low-to-mid 90s farther north, and in the mid-to-upper 90s to even 100 degrees farthest south. However, with dew points in the low-to-mid 70s, humidity will continue to surge, allowing for heat indices over 100 and up to 110 !! Try to limit time outside this afternoon, but if you have to work outdoors, be sure to take frequent breaks, drink plenty of water, and spend as much time in the shade as possible.

Heat and humidity combined with approaching disturbances also brings the risk for scattered showers and storms later this afternoon and evening, primarily in northern VA, MD, and eastern PA. After sunset and into the first part of the night, isolated to widely scattered storms can spread eastward into NJ, the Hudson Valley, and western CT or Long Island, with other locations across New England likely holding dry. With this activity comes the risk for some strong-to-severe storm development (mainly northern VA and MD), with damaging wind gusts, some hail, and torrential downpours as the main risk.  Activity looks to mainly quiet down for the second half of the overnight, leading to partly to mostly cloudy skies. Humidity lingers as well, with low temperatures expected in the mid-to-upper 70s. 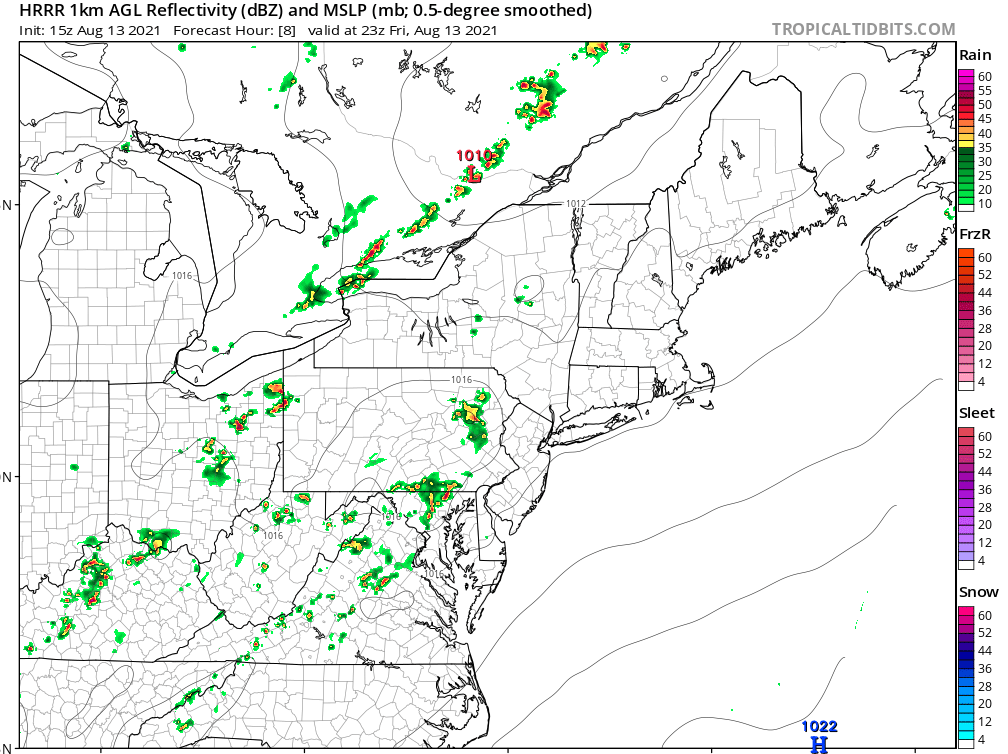 Heat drops off some tomorrow, with highs "only" reaching the upper 80s to low 90s. However, with persistent high dewpoints in the low-to-mid 70s, it will still feel very uncomfortable, with heat indices in the mid-to-upper 90s across the region. A cold front then trekks through the Northeast and Mid-Atlantic tomorrow. The morning hours may feature a few isolated showers around the area, with scattered shower/storm activity building towards midday and into the first half of the afternoon in New England and northern portions of the Mid-Atlantic. These areas dry out some come the second half of the day as the front, and therefore associated scattered shower/storm activity, pushes south, next impacting southern portions of the Mid-Atlantic in the mid-to-late afternoon. Storms once again hold a risk to turn strong or severe, with gusty winds or heavy rainfall capable of flooding as the primary threats. 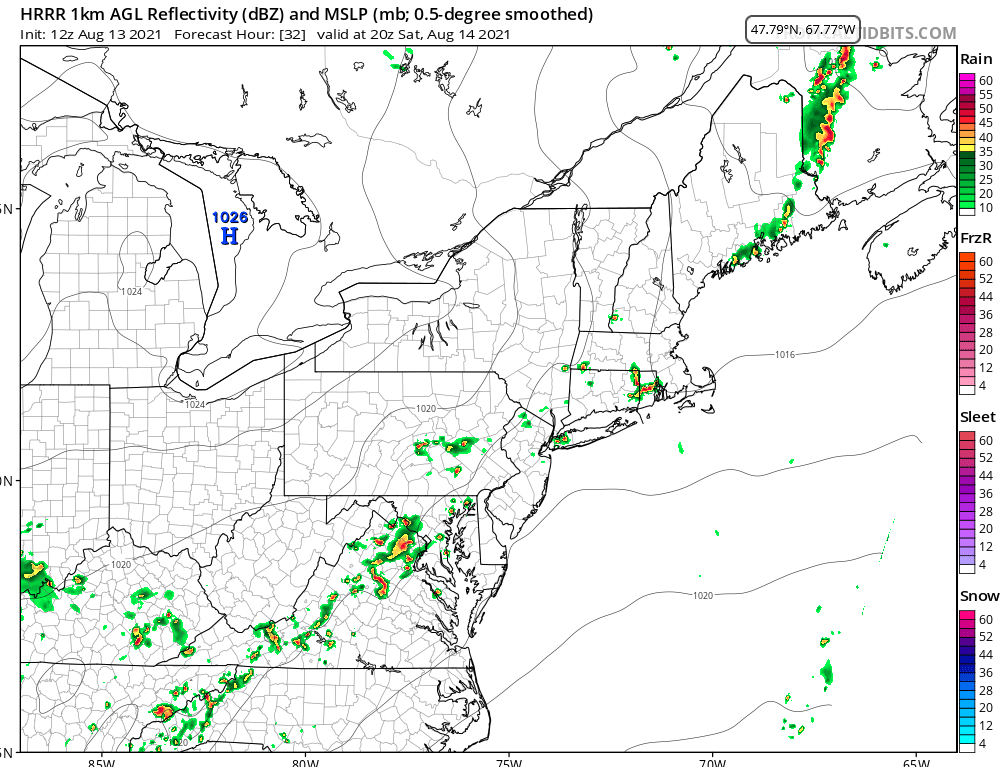 While activity farthest south tapers off mainly by midnight, the front looks to stall just south of MD/northern VA. This can prolong areas of showers or even some periods of light rain into Sunday morning across southern areas of the Mid-Atlantic, mainly around D.C. points south. Elesewhere across the region looks dry and will gradually turn less humid as skies partially clear. Overnight low temperatures in the 60s are expected.

We finally get some relief from the heat and humidity on Sunday following the cold frontal passage, with high temperatures only topping out in the low-to-mid 80s. High pressure builds into the region behind the cold front as well, resulting in dry conditions for New England and much of the Mid-Atlantic. However, locations farthest south still may have to deal with the stalled out cold front around the area, which can prolong rain chances through Sunday morning as well as cloud cover. This would, again, be mainly confined to locations around D.C. points south.

Another system looks to approach from the south come Monday, which could allow for a few showers to impact southern portions of our region during the second half of the day. Unfortunately again, northern VA and southern MD hold the greatest risk to see showers, but by no means does this look like a washout. Elsewhere across the Mid-Atlantic and New England will hold dry under a partly to mostly sunny sky. Less humid conditions thankfully continue, with high temperatures in the low-to-mid 80s.

Check back here on Monday for an update on the forecast for the new work week. Have a great weekend everyone and stay cool !!