Some Rain & Some Sun This Weekend...

More clouds than sun and cooler conditions are expected across the Northeast and Mid-Atlantic for the remainder of our Friday as a stalled front meanders across central Virgina.  Southern portions of the Mid-Atlantic (particularly central and southern NJ, southeast PA, MD, and northern VA) will continue to see on-and-off showers and perhaps even a steadier period of rain through the rest of Friday afternoon, though these should decrease some in coverage towards evening. Scattered showers persist into the first part of the night in these areas (again favoring MD and N.VA), but slowly turn more isolated through the predawn as the disturbance finally pushes south and clears the area.

Meanwhile, an additional disturbance dropping down from the north will affect northern New England tonight into tomorrow morning. While a stray shower is not ruled out farthest north later this afternoon, scattered showers don't turn more likely until the overnight hours, first in southern NH, and last in south central MA. Other regions of New England, including northern RI, northern CT, and upper portions of the Hudson Valley, only have a slight risk to see an isolated shower or two by tomorrow morning.

Showers linger across southern NH and most of MA tomorrow morning before the disturbance clears the area towards midday (again, first in southern NH). Seasonable and dry conditions are then expected for the remainder of the day in this area under a mix of sun and clouds. Throughout the rest of New England and across much of the Mid-Atlantic, the day is expected to hold largely dry and should be good for outdoor activites, though a few isolated sprinkles or showers are possible, primarily early and then again later on in the afternoon and evening. Here's a look at the anticipated radar for 9AM tomorrow morning from the Hi-Res NAM: 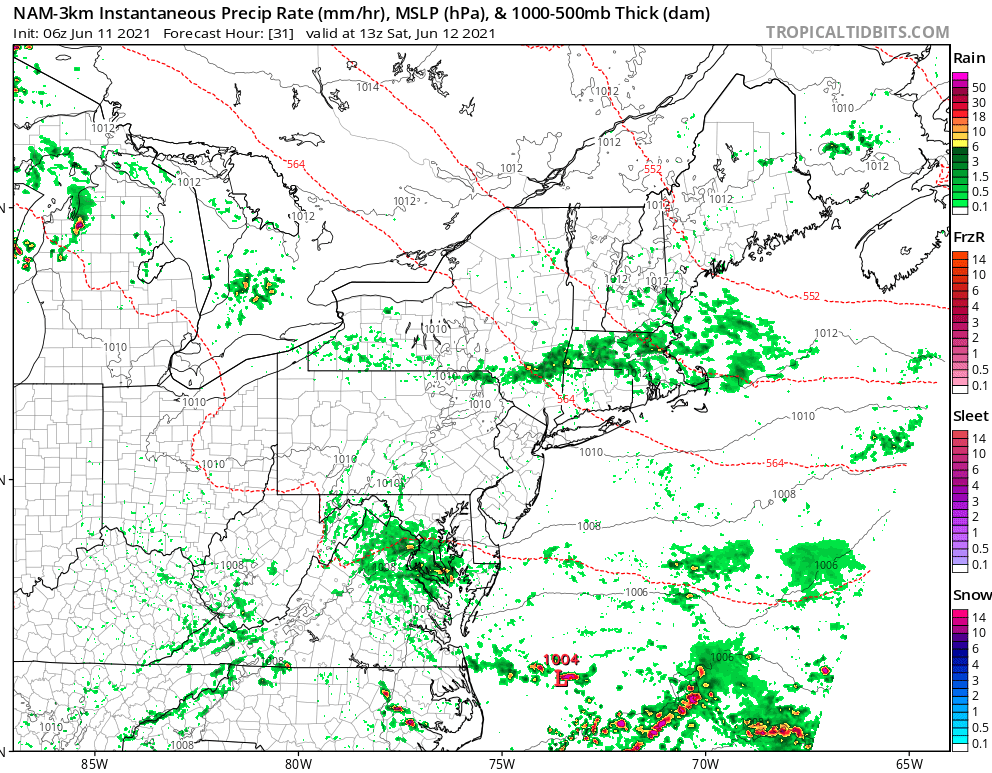 High temperatures are anticipated to range from the low-to-mid 70s across New England to the low 80s in southern NJ, MD, and noerthen VA. 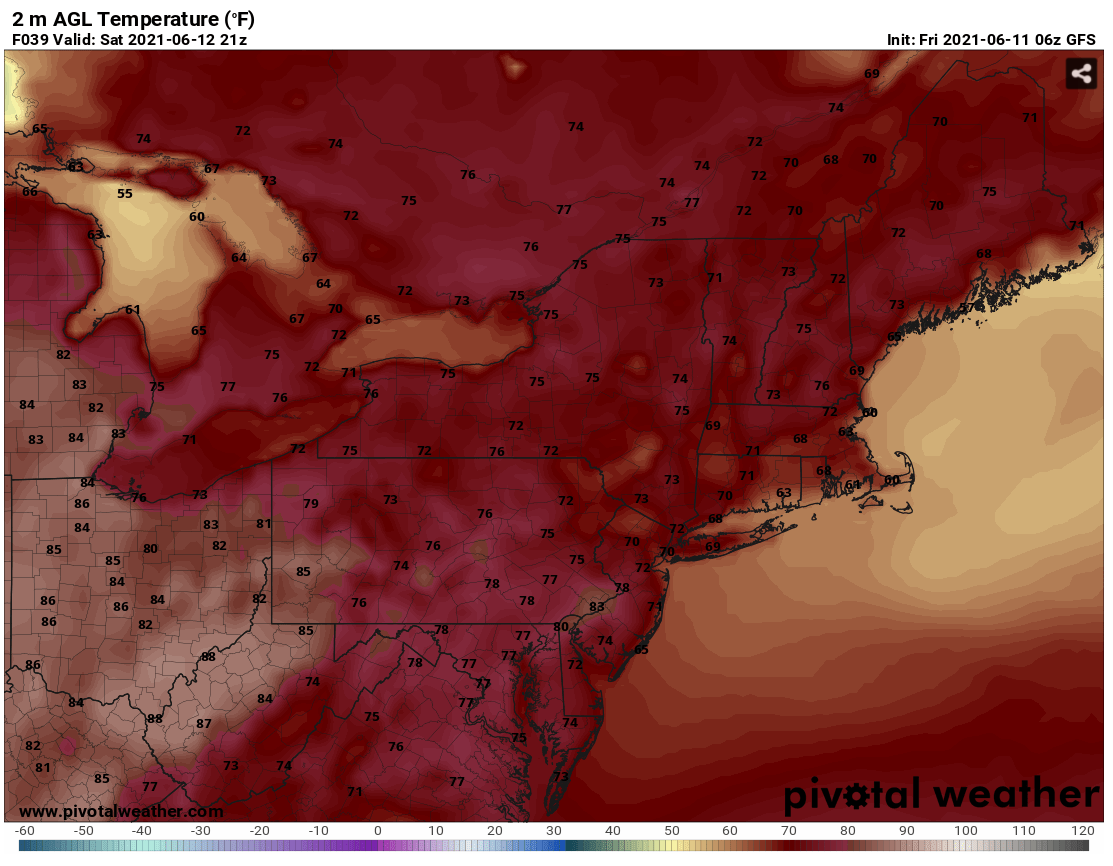 Quiet and dry conditions are then expected for tomorrow night across the greater region under a partly to mostly cloudy sky. Areas of fog can develop, looking most likely in the valleys. Low temps will drop into the mid-to-upper 50s north and low-to-mid 60s farthest south.

An additional disturbance approaches the region on Sunday, bringing along with it the next chance of rain. While portions of the Mid-Atlantic and the Hudson Valley could see a shower or two during the morning, scattered showers likely hold off until later in the afternoon. These are expected to turn more widespread in the evening with perhaps a period of steadier rain Sunday night. Farther east on Long Island and into New England, most of the daylight hours look to hold dry until some showers become possible towards evening then also increasing Sunday night. High temperatures will be in the mid-to-upper 70s north to the low-to-mid 80s south are expected. 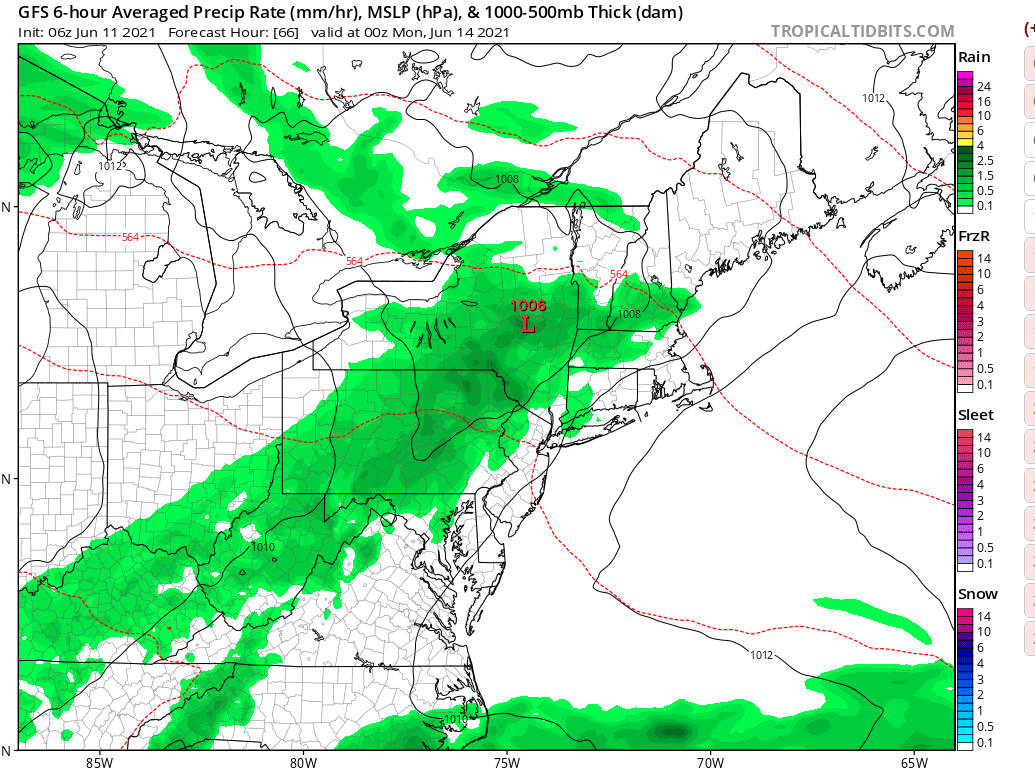 The backside of this system treks across the Northeast on Monday in the form of a cold front. While much of the Mid-Atlantic should escape most of the activity in the morning as rain showers exit, a few spotty showers or even storms can linger through the afternoon. Showers can linger Monday morning across New England as the first wave of precipitation from the previous night dissipates.  However, as the cold front progresses eastward, there is the potential for additional scattered showers and perhaps a few storms in the afternoon and evening. Temperatures across the region are anticipated to be in the upper 70s to low 80s.

Check back on Monday for an update on this next week's weather !! Have a great weekend everyone !!