Hot, Humid, and a Bit Stormy This Weekend...

No weather concerns for the remainder of our Friday across the Northeast and Mid-Atlantic as we close out the work week. Tonight stays quiet as well with the exception of a few sprinkles across eastern New England.  That brings us to the weekend, and it will be very summer-like up and down the I-95 corridor.

Most of tomorrow looks to be great for outdoor plans as the majority of the daylight hours are expected to be dry and rather warm. However, we do have to contend with the risk of isolated to widely scattered showers and storms late in the day as a disturbance pushes towards the East Coast. And while activity becomes possible as early as mid-afternoon in New England down through central New Jersey, the greatest risk for rain looks to hold off until early evening in these areas.  The further south and west you travel, the lower the chance for any showers or storms.  Take a look at the Hi-Res NAM below which depicts isolated showers/storms on its simulated reflectivity for 6 PM Saturday: 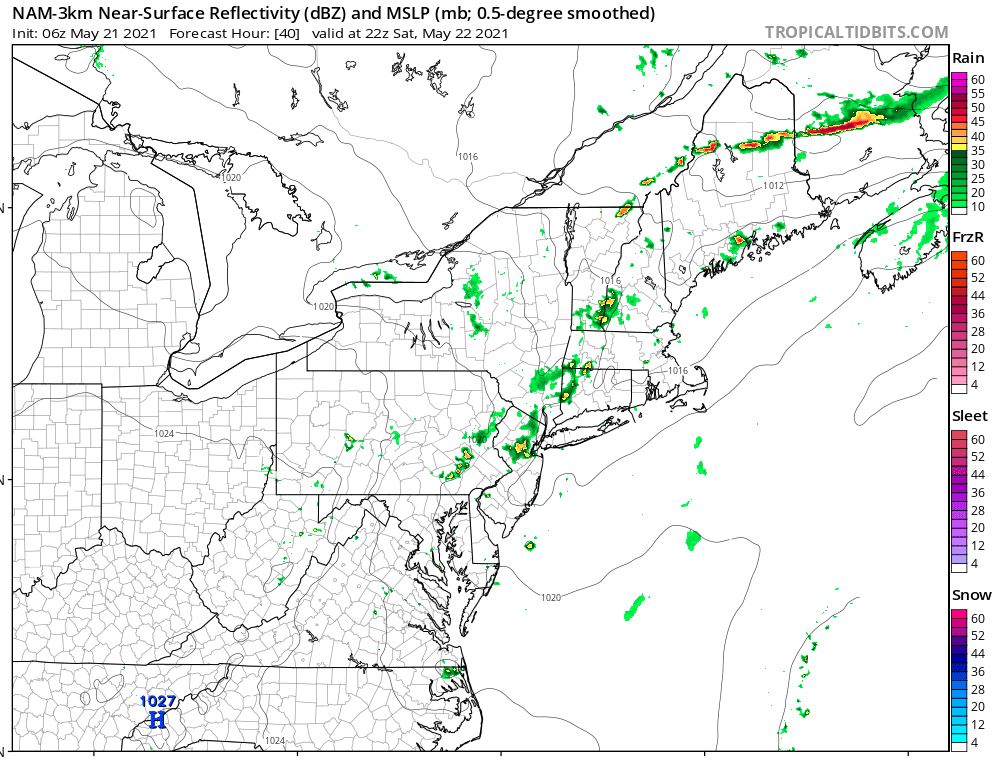 Temperatures are expected to warm up quite a bit on Saturday as humidity increases a bit, too. Afternoon highs are anticipated to climb into the upper 70s/low 80s farthest north, and into the upper 80s/low 90s far south. However, the coasts of MA, CT, Long Island, and the Jersey Shore are expected to run a bit cooler. Here are forecast temperatures for 3 PM Saurday from the Hi-Res NAM: 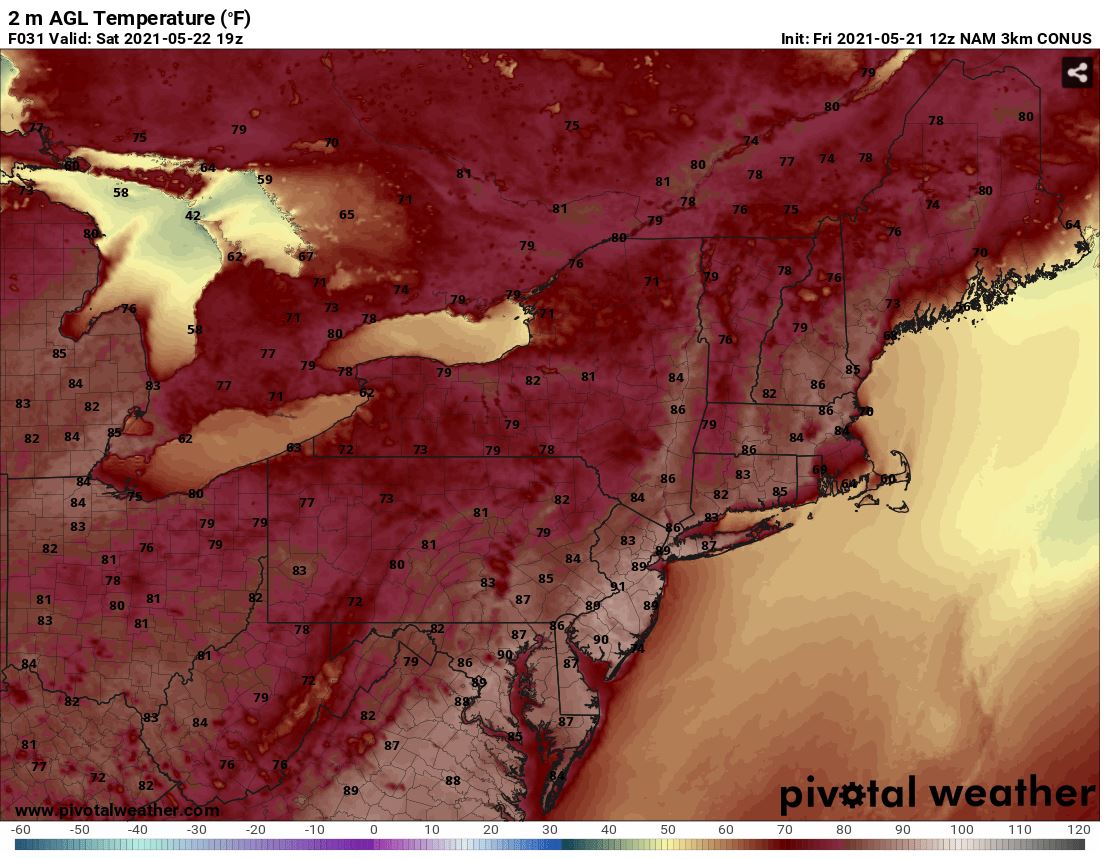 Sunday appears to be similar to Saturday as most of the day holds dry, but it becomes rather hot and increasingly humid. However, a cold front will slide towards the region and lend to an additional risk for isolated to scattered showers and storms across the Northeast and Mid-Atlantic. Activity may begin in the late afternoon / early evening in locations farthest north and west, such as in MA, Hudson Valley, northeast PA, and northern NJ. However, places farther south and east, such as the remainder of NJ and eastern PA, and to a lesser extent MD and N.VA, may hold off on the potential showers or storms until after sunset or even until the first part of the overnight as the front passes through. While coverage of storms is forecast to be limited, a few storms may be locally strong to severe (favoring locations farthest north/west), with gusty winds being the main threat.

As mentioned, temperatures and dewpoints are expected to climb even higher on Sunday, resulting in rather hot and humid conditions. Afternoon highs are expected to range from the mid 80s to low-mid 90s across the region and with dewpoints getting into the 60s, it will feel even warmer. 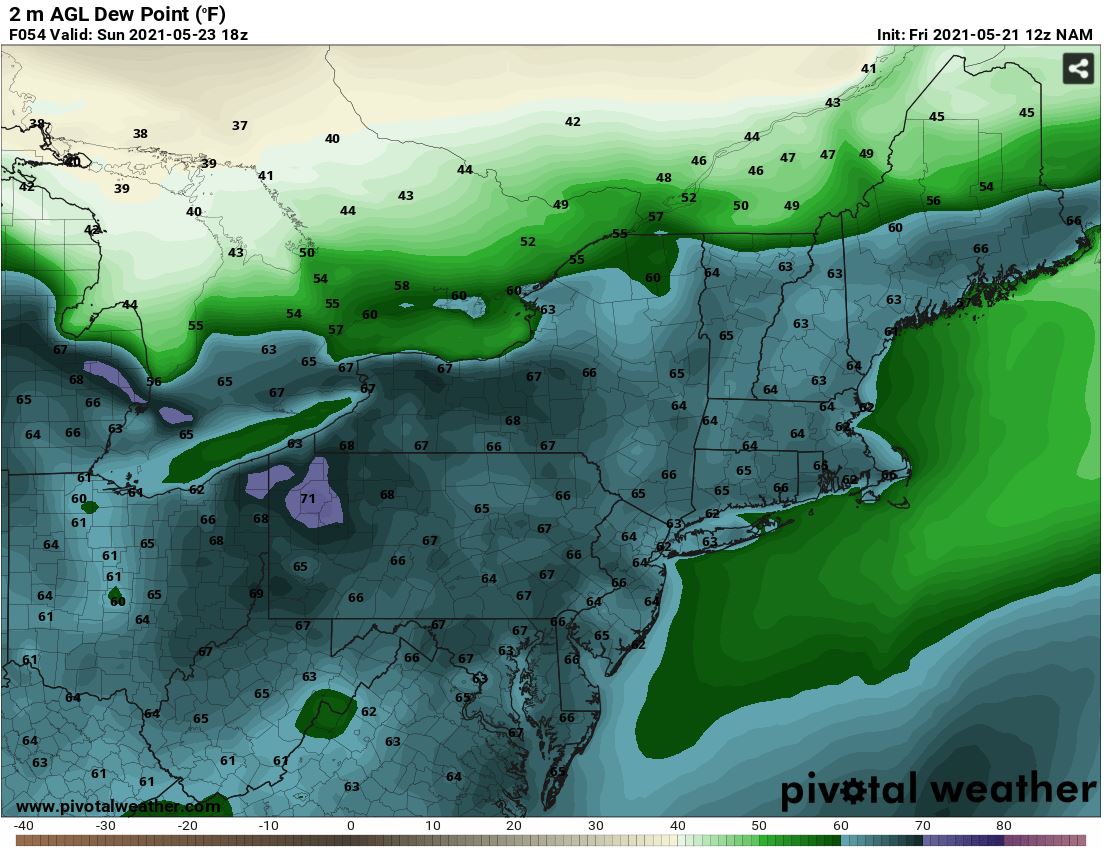 The cold frontal passage late Sunday into early Monday leaves us with a cooler and more seasonable start to the work week. While the Northeast and most of the Mid-Atlantic look to hold dry, due to the front lingering just south of the area, showers or even periods of rain remain possible at times through the day on Monday in SE PA, DE, and especially MD-N. VA. Meanwhile, anticipated high temperatures will only be in the 60s and 70s.

Check back here on Monday for an update on upcoming weather for the next work week. Have a great weekend everyone !!