Most people have heard of a tsunami, or a large, seismically-induced (i.e. caused by earthquakes) ocean wave that can cause massive destruction and pose an extreme threat to life. This phenomenon has become prevalent due to harrowing events that include the 2004 Indian Ocean tsunami and the 2011 Japanese tsunami and Fukushima meltdown. But what is a meteotsunami?

A meteotsunami is a smaller, atmospherically-induced wave that can also cause destruction and pose a risk to to individuals near the water. Atmospheric phenomena induce meteotsunamis by causing a sharp change in air pressure and/or wind speed. Although similar to earthquake-induced tsunamis in how they behave in water bodies, affect coastal regions, and appear on tidal gauges during detection, it is important to remember that meteotsunamis are generated by the atmosphere, and not by seismic events.

Meteotsunamis occur rather frequently in various bodies of water all around the world. Study researchers found that 548 meteotsunamis were detected on the U.S. East Coast from 1996 to 2017. 25 meteotsunamis occur each year along the coast from Maine to Florida (most often in the Carolinas, near Atlantic City, and along the Long Island Sound). Most are less than 1.5 feet high and are relatively harmless, but about one wave per year exceeds 2 feet in height, large enough to cause damage to property and injuries to those near the coast. Meteotsunamis occur even more frequently in the U.S. Great Lakes, with an average of 106 events per year throughout the region, with multiple events with waves much larger than 2 feet.

East Coast meteotsunami events per year and maximum height in meters. Via NOAA. Meteotsunamis are most common in the summer due to squall lines, which are fast-moving severe thunderstorms and include derechos, along with frontal passages in the Great Lakes and on the East Coast. Even tropical storms and hurricanes can cause meteotsunamis on the Atlantic coastline! Occurence is less common in winter, but can still occur due to frontal passages and storm systems in these locations, as well as nor'easters on the East Coast. Since frequency is greater in the summer, meteotsunamis can especially cause a threat to society due to the large number people flocking to the coast for recreational activities in the warmer months.

A recent example from July 6, 2020 involves a meteotsunami occuring along the Chesapeake Bay near Tolchester Beach due to strong thunderstorms. The following image from the National Weather Service in Mount Holly NJ shows a classic meteotsunami signature, a quick rise and subsequent fall with several smaller "waves" following the initial disturbance. 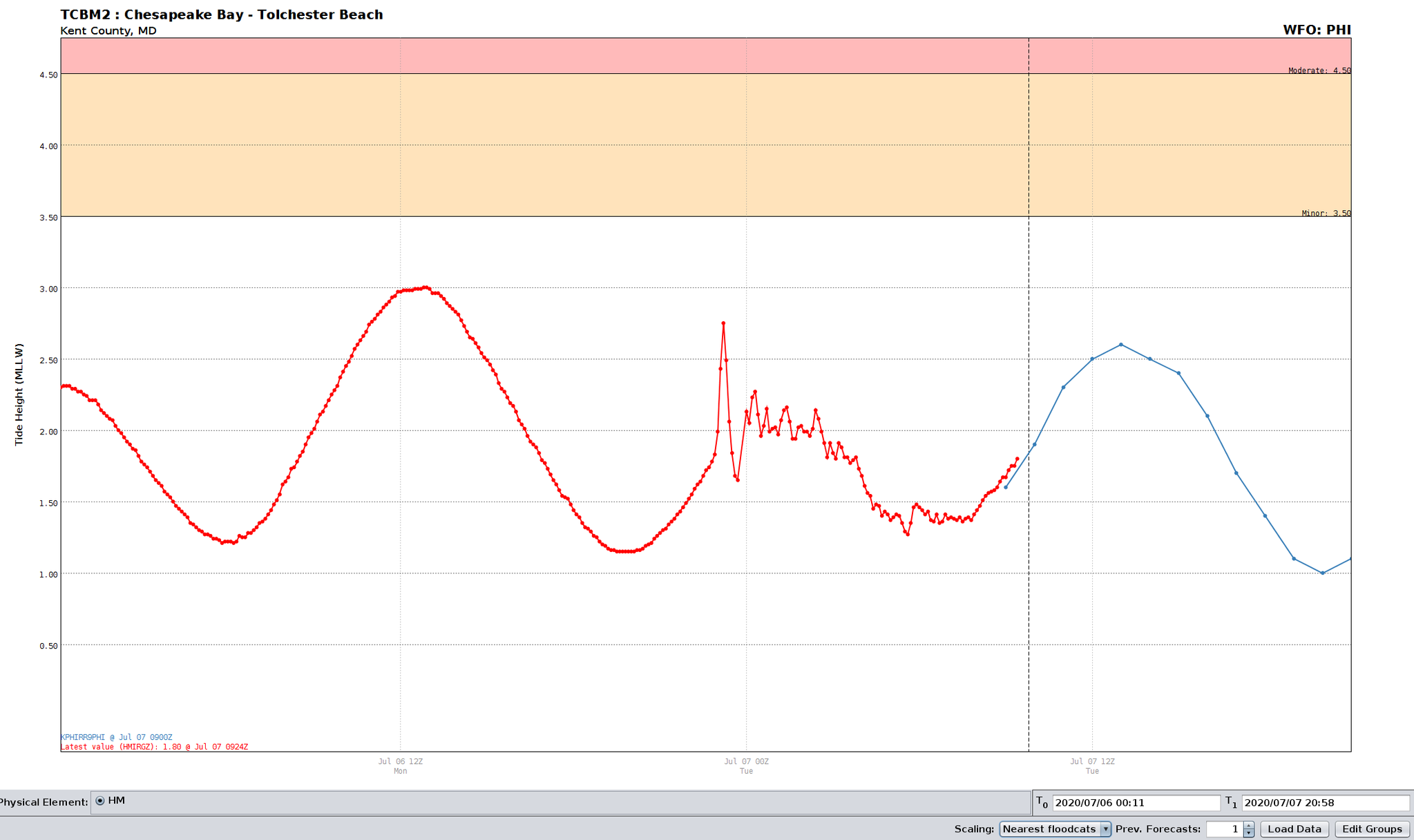 NOAA is continuing work on developing an accurate and timely meteotsunami warning system, which will alert the public of a meteotsunami occurance and potential impacts, continuing the mission of all meteorologists to protect life and property.