What are the AO and NAO?

Heading into winter, a few terms are going to be thrown around, one of which will be the "Polar Vortex". Those menacing two words always seem to make a comeback, especially in the heart of winter. But...What do they mean?

Taking the two words individually, it makes it simpler to figure out what it is. Polar: Cold air from the Poles (North and South); Vortex: Circulation of air. You put them together and it is cold, polar air swirling around the North or South Pole. In the winter, this term is used because cold air can drop through the mid-latitudes (where we live) and bring some frigid cold temperatures with it. Now that we know the basics about the polar vortex and what it can bring, we will get into the AO and NAO.

Without getting too scientific, the AO is a global teleconnection and stands for "Arctic Oscillation." Just like an El Niño and La Niña, the AO can change our weather pretty dramatically. There are 2 phases of the AO, positive and negative (+AO and -AO). Which one do you think can make us colder in the winter? Well, if you want to have a winter with more cold air and snow, you would root for a negative AO. The reason is because when the AO goes negative, the circulation around the North Pole weakens. Think about spinning a top, when it initially spins, it is tight and compact (+AO), but as the rotation begins to weaken, the top wobbles back and forth (-AO). When we are in a -AO phase, the same thing happens in the atmosphere, the circulation weakens and the arctic air is able to break free from the north and wobble south into our regions.

On the other hand, the NAO is a teleconnection that measures the differences in air pressure over Greenland and the Central Atlantic Ocean. The NAO changes its phase pretty frequently (from positive to negative) throughout the year. Due to this continuous changing, predicting the phases of the NAO becomes increasingly difficult. Nonetheless, when we are forecasting it, we look over Greenland for a sub-polar low pressure, and over the Central Atlantic for a sub-tropical high pressure. Without going into detail on those, if they are both stronger than average, the NAO will be positive, which accelerates the flow of storms over the North Atlantic. On the other hand, if these are both weaker than average (sometimes yielding a ridge or high pressure block over Greenland) we will have a -NAO. So, one of the keys in getting polar air-masses down into the United States, is a -NAO. Plus, a negative NAO is useful in causing a "traffic jam" of storminess near the eastern seaboard, so those who are looking for nor'easters key on this teleconnection. 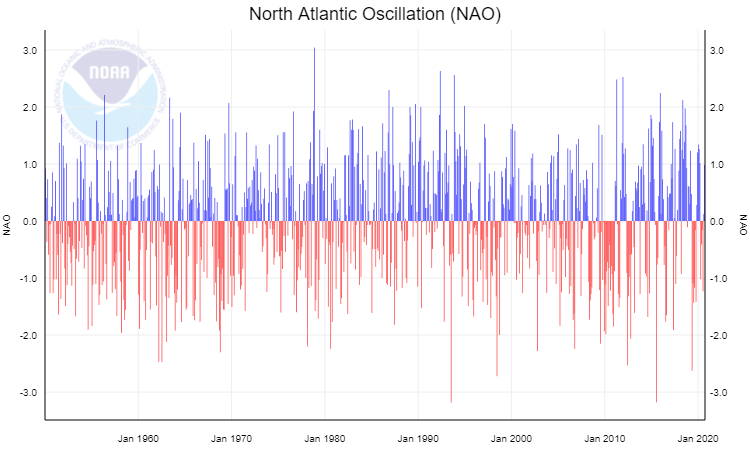 This image from https://www.ncdc.noaa.gov/teleconnections/nao/ shows just how much variation that NAO has on a yearly/decadal basis. The blues show when the NAO is positive, and the reds represent a negative NAO.

To wrap things up, if you ever hear that the Polar Vortex is making a comeback, there just might be a -NAO and -AO forcing the cold air southward because of its weak circulation.