Why the Cold Snap in Late March?

This March began on the warmer side, continuing the above-average temperature regime that we saw for much of February. This was mainly due to the stratospheric polar vortex (SPV), which was much stronger than normal at the end of winter:

This was not a problem earlier in the winter since the stratospheric polar vortex (which is very high in the atmosphere) wasn't coupled or linked to the tropospheric polar vortex (TPV, closer to the surface). This means that the near-record strength of the SPV didn't directly impact the strength of the TPV along with the temperatures at the surface where we live. However, they both became coupled in February and increased strength, which locked up much of the cold air north of the Canadian border. Once we headed into March, there was some weakening of the polar vortices, leading to a few colder shots and wintry weather during the middle third of the month, but it was still warmer than average from a milder southwest flow. In addition, a southeast ridge of high pressure tended to scour out any cold/wintry weather quickly when it did manage to develop. 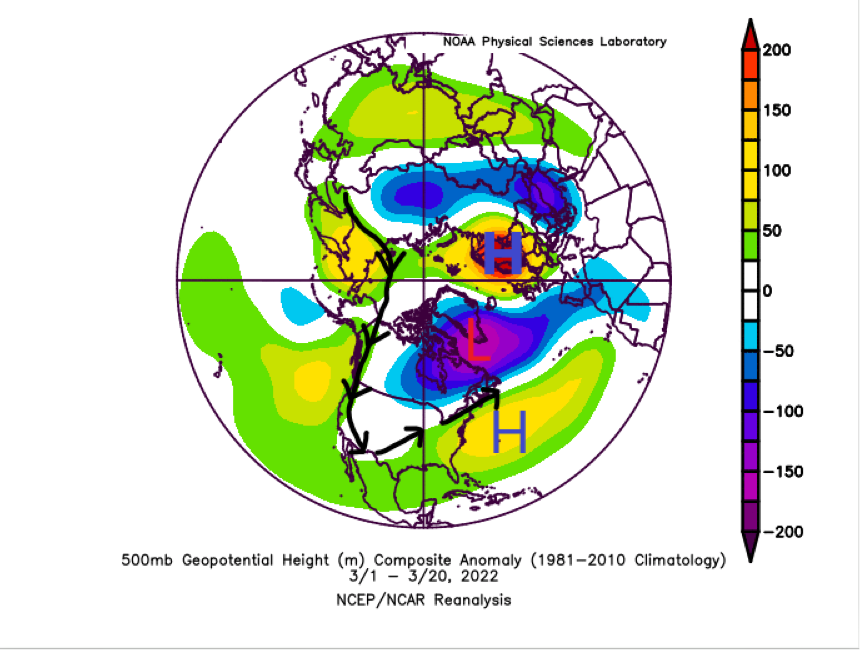 Take note of the blocking high pressure system over Scandinavia, as this helps force an abrupt pattern change late-month. NCEP/NCAR

Once we head into late March, the stratospheric polar vortex weakens dramatically. This warming and weakening of the polar vortex is par for the course in Spring, but in 2022 the warming was particularly strong. This weakened the polar vortex also linked to the surface late in the month, which increased the risk for high-latitude blocking, shown by a negative North Atlantic Oscillation (-NAO) / Arctic Oscillation (-AO) (conducive for cold and snow). The Scandinavian block also migrated west, as they often do in the winter, and helped force a blocking pattern over Greenland and the North Pole, which is the opposite of what we saw earlier in the month: 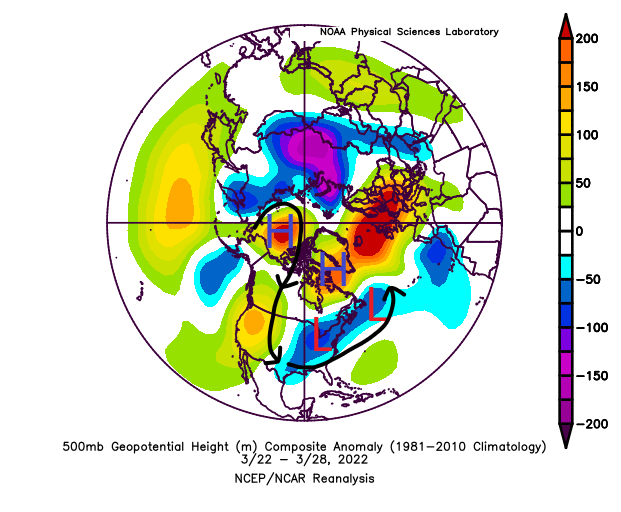 Note how the Scandinavian high extened and pushed over Greenland and the North Pole. NCEP/NCAR

The combination of the -AO and -NAO, shown by the blocking high pressure over Greenland and the North Pole, allowed for a broad, cold, and deep trough to develop over the Eastern U.S. into Atlantic Canada. Unlike the previous pattern, the cross polar flow is actually able to dive farther south and spread eastward, leading to a cold stretch of weather over the Midwest and Northeast US. Blocking patterns such as this one also slow the overall flow down due to multiple upper level lows getting "stuck" in the Atlantic, as shown above in blues. This allows for low pressure systems to amplify or strengthen. As a result, there was a highly anomalous trough over the Northeast US from the 25th to the 28th, which brought record-breaking cold and some highly impactful snow squalls along with it:

Note the blues/purples indicating cold/stormy weather over the eastern half of the U.S. NCEP/NCAR

So, if you were curious as to why there was an abrupt cold snap at the end March, now you know there was a combination of global pattern drivers leading to a chilly start to spring. The good news? Next week this chilly pattern finally breaks down with warmth returning to the Midwest into the Northeast. Yes, there still can be cooler shots during the second half of April, but with average highs around 60 or more, any mixing will be hard to come by. Here's to spring!