Last winter got off to a slow start in the Central and Eastern United States, as milder temperatures and little snow made it feel more like an "extended fall" more than anything else. The pattern did become much more wintry in January, however, as persistent cold allowed a few notable winter storms to occur. These include a 6 -12" snowstorm from Virginia to southern New Jersey and a late month blizzard that brought crippling snowfall to parts of New England. Although winter did ease its grip somewhat in February and March across the Central and Eastern United States, it made one last stand in April with late season snow for many.

So far, this fall has felt different from last year. The "prolonged summer" seen the past few years never showed up this year, as a chilly October occurred in the eastern half of the country. Is the October chill a sign of things to come this winter? To find out, we took a look at sea surface temperatures across the globe.

The above image shows the sea surface temperature anomalies as of mid-October. The reds indicate warmer than normal waters, while the blues indicate cooler than normal waters. We circled the major anomalies that caught our eye when coming up with our winter outlook. We believe each of these areas will play a role in how the winter pattern shapes up. Let's take a closer look...

Area 1 indicates that we still have a healthy La Niña going on, which is cooler than normal sea surface temperatures along the equatorial Pacific. One index we like to look at to see how much La Niña or El Niño is impacting the pattern is the Multivariate ENSO Index (MEI).

The chart above shows the MEI values since 2020 (in two month averages). Blue negative numbers equals La Niña, black numbers are neutral, and positive red numbers indicate El Niño. You can see that we have clearly been in a formidable La Niña episode for a while, which will likely continue through much of this winter.

Area 2 indicates what is going on with the Pacific Decadal Oscillation (PDO). This a measurement of how warm or cool the sea surface temperatures are in the Northern Pacific. The PDO is currently in its negative phase, which favors cold air further west over the Northern Rockies and Northern Plains. Despite this, we feel the warm waters along the West Coast of the United States can help promote colder than normal temperatures in the East at times.

Area 3 indicates warm waters in the Maritime Continent, which is a classic La Niña setup. So why does this matter? Another index that we like to look at is the Madden – Jullian Oscillation (MJO). This is basically a measure of the strength and placement of convection (thunderstorms) that travels across the equatorial Pacific. It is fairly common for the MJO to be located in the Maritime Continent phases during a La Niña winter, and indications are it will stay in this region through the early part of the season. This has been known to favor early winter high latitude blocking and chilly temperatures in the East. However, the MJO staying in the Maritime Continent becomes a problem for cold and snow in our client regions in January and February, as it starts contributing to high pressure over the Southeast, meaning less wintry weather overall.

Finally, Area 4 is referring to the Atlantic Multi-decadal Oscillation (AMO), which is largely based on the sea surface temperature anomalies in the North Atlantic. Right now, much of the North Atlantic is running above normal, which means the AMO is in its positive phase. The most notable area of warmth is near southeastern Canada and Greenland. While warm waters around Greenland can assist in the development of high latitude blocking, the current warm AMO episode likely has contributed to a central Atlantic ridge that has been fairly common the past several seasons. As long as these waters remain warm through the winter, it is likely a central Atlantic ridge will pay a visit at some point.

We took all of these factors into account when coming up with analog years (years with similar conditions as this year) for this winter. Below is what the trough and ridge pattern looks like (on average) in our analog years: 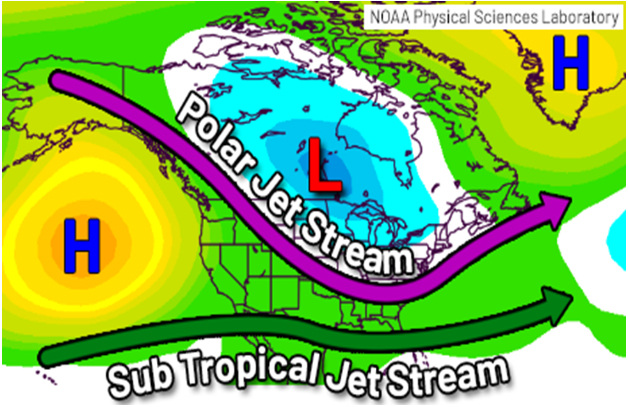 All of our analog years were La Niña winters, and the map certainly has a La Niña look to it. The Central Pacific area of high pressure stands out, and it is no surprise that our analogs favor the worst of winter to remain over the Northern Plains and Great Lakes. However, another feature that stands out is an area of high pressure over Greenland. This is known as high latitude blocking (-NAO). This helps keep a trough over the Northeast, which can lead to opportunities for cold and snow.

Our overall outlook for the winter shows the most persistent cold occurring over the Northern Plains and Great Lakes, with mild conditions occurring in the Southern Mid-Atlantic and Southeast. Keep in mind that these maps are a blend of the winter as a whole, and they are not showing you the specific "details". We see opportunities for a few arctic blasts and snow/ice early in the season across the Ohio Valley and Northeast before the pattern turns milder for the second half of winter. If the Greenland blocking is stronger and more persistent during the first part of winter like our analogs suggest, our temperature outlook could end up a bit colder. However, we expect La Niña climatology to eventually take over and mild temperatures to win out.

Taking everything we discussed into consideration, our outlook favors above normal snow in the Northern Plains, Great Lakes, and even parts of Northern New England. If you are a snow lover along the East Coast, we're sorry we don't have better news. We believe the combination of milder temperatures later on and an overall drier pattern points to slightly below normal snowfall. Also, we are favoring more mixed and rain events in this region. Despite early season cold, a drier pattern will keep a lower than normal risk of a significant snowfall in place. The real battleground this winter is expected to be in the Ohio Valley, where near normal snowfall and a higher risk of mixed events exists.

For more info and insights into the upcoming winter, check out our recent webinar below: