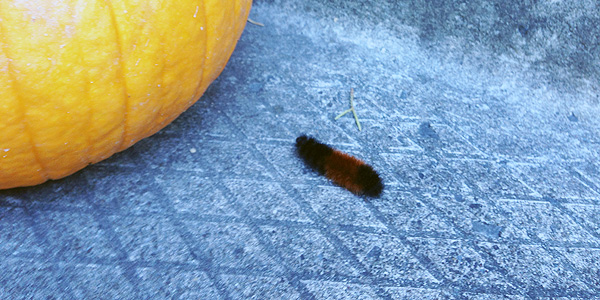 Folklore says the woolly bear caterpillar can predict the severity of the winter simply by the length of the red-orange band at the center of its body. Basically, the more red-orange there is the warmer the winter and the less red-orange, the colder, more snowy the winter will be. In the 1940s and 50s a scientist by the name of C. H. Curran studied an admittedly small sample of the woolly bears and actually predicted the subsequent mild winter. Our long range prediction problems are solved, right? Well, not so much. Again, Dr. Curran's sample was small and even he himself considered it "entertainment." In addition, other researchers attempted to replicate the study, but came away with a less than stellar accuracy rate. Moreover, the same group of eggs can even hatch into caterpillars of varying dark and light bands. Not to mention as the woolly bear grows older, its orange band grows toward the black ends of its body. So basically, you can predict a severe winter if you find a young caterpillar, but at the same point in time you may find an older caterpillar supposedly predicting a mild winter. I guess the choice is yours!