Last winter came in spurts in the central and eastern U.S., with an early Nor’easter dumping plenty of snow in mid-December, a prolonged mild stretch that began around the holidays, and a few weeks of chilly, active weather from later in January through February (coupled with another big Northeast snowfall). After a mild March, parts of the Midwest and Northeast saw unusually late accumulating snow in April. Through all of this, seasonal snowfall was much higher than the previous season in most of the central and eastern U.S., though parts of the Mid Atlantic (such as Baltimore and DC) still came in below normal. Will this winter be another busy season for parts of the region, or will it be more of a “grinch”, stingy on snowfall?

For the second winter in a row, a La Niña event is developing across the Equatorial Pacific. This means cooler than normal waters in that region, whereas an El Niño means the opposite (unusually warm waters). This La Niña is expected to be of similar intensity to last winter (weak to borderline moderate), which means it may not “overwhelm” the pattern but will be a factor. 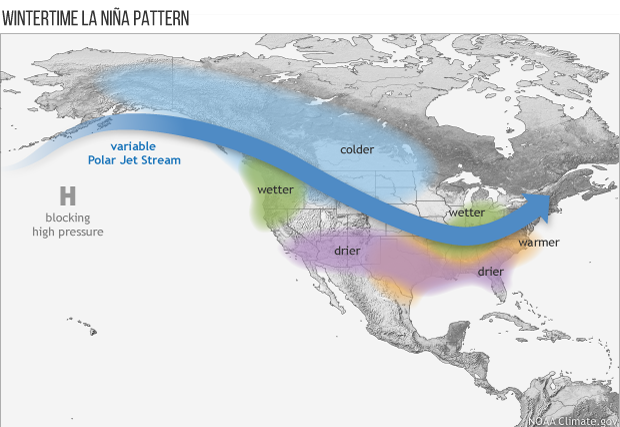 What does a La Niña winter mean? Typically, it means there’s a ridge in the jet stream over the Pacific, with cold air flowing up and around that ridge and dropping down into Alaska, western Canada, and the northern Plains. La Niña winters tend to be drier and somewhat milder across the southern U.S., with places like the Ohio Valley and New England often stuck in a “battle zone” between the warmth and the cold, resulting in active weather.

With this “baseline” pattern in mind, some recent La Niña winters include last year (fairly snowy, especially outside of the Southeast and lower Mid-Atlantic), 2017-18 (very up and down, but fairly snowy), 2016-17 (quite mild, but still relatively snowy from northern PA and Upstate NY into New England and in parts of the Upper Midwest), 2011-12 (quite mild and relatively snowless), and 2010-11 (fairly cold and snowy for much of the country)…the last few La Niñas have been quite the mixed bag of winters across the Lower 48.

La Niña is only a starting point, and we also look into water temperatures across the rest of the globe, atmospheric weather patterns leading into the winter, and even things like the “solar cycle”. We look for years with as many similarities as possible to this year and see how those winters played out. We call these analog years. Here is a look at the pattern that shows up when we blend several good analogs for this upcoming season: 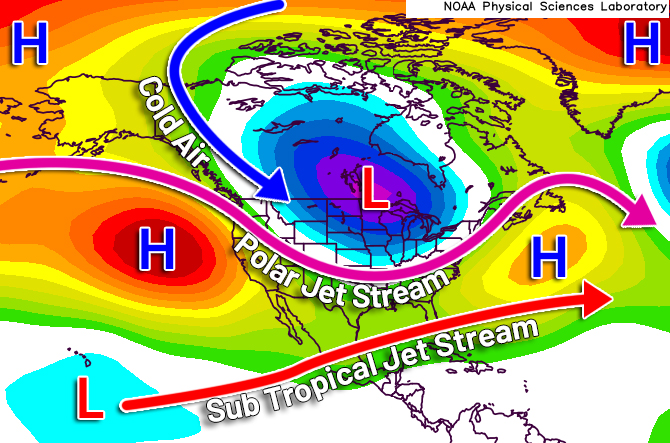 Since we focused on winters that saw a La Niña, such as is expected this winter, there’s certainly an underlying La Niña “flavor” to the analog pattern for this winter. The analogs have the cold air focused a bit farther south and east than the “typical” La Niña pattern, and show what can help this winter break in a colder (or warmer) direction. The areas to focus on are over Alaska and Greenland. Many analogs have “blocking” in these areas: ridging in the jet stream that causes it to slow down and “buckle”, causing colder air to plunge south and increasing snow potential in the central and eastern U.S. However, a few analogs have a lack of blocking in these areas (such as 2011-2012), which would largely keep cold air bottled up over the northern Rockies and Canada this winter, limiting snow potential in the central and eastern U.S.

Our outlook for the winter as a whole currently follows a “middle ground” solution, with the coldest air focused on the northern Plains and Upper Midwest, but any persistently mild weather is relegated to the Southwest and Southeast. Places like the Ohio Valley, Mid-Atlantic, and Northeast are favored to see temperatures that average out to either side of “normal” through the winter, but it’s expected that a lot of ups and downs occur in that process. Remember, these maps are a picture of the entire season as a whole; there will be shorter term colder and warmer fluctuations across the board. If blocking is more persistent the winter as a whole may be colder, and the opposite is also true if we see little to no blocking this winter. Our analogs that had more / less blocking often start having notably different patterns during November, and that is something we’ll be watching for heading towards winter.

With everything discussed above factored in, here is our snowfall outlook for the upcoming season. Regions we favor snowy conditions include the Pacific Northwest and northern Rockies, along with the Great Lakes, northern Ohio Valley, and much of the Northeast (especially the interior). Regions that we think will lack snow (compared to average) include the Southwest / Four Corners, along with parts of the Southeast and Upper Midwest. Of course, more or less blocking can shift the snowy corridors farther north or south respectively. Given the temperature gradient from the Ohio Valley into the northern Mid-Atlantic and Northeast, an elevated potential for some mixed or icy events is expected this winter.

If you are looking for more updates like these, you may want to consider our Winter Risk products. These will give more frequent updates on the long range along with a 1 - 5 day forecast discussion Monday through Friday.